We were scheduled to go Phi Phi Island today and we are all pretty excited about it!

Stumbled into this street stall opposite our hotel and this auntie sells the best pau! Different flavoured and coloured pau, nice and hot! Look how colourful they are!

Additional banana and egg pancake from the stall next to it.

We waited for our transport to pick us up and arrived at Ao Nang beach where we will board our speedboat.

Our speedboat! Finally get to board one! 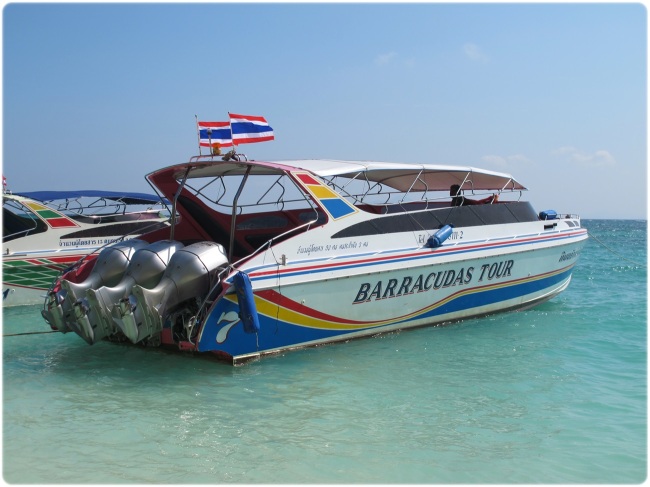 Arrival at our first island. This is Bamboo Island!! 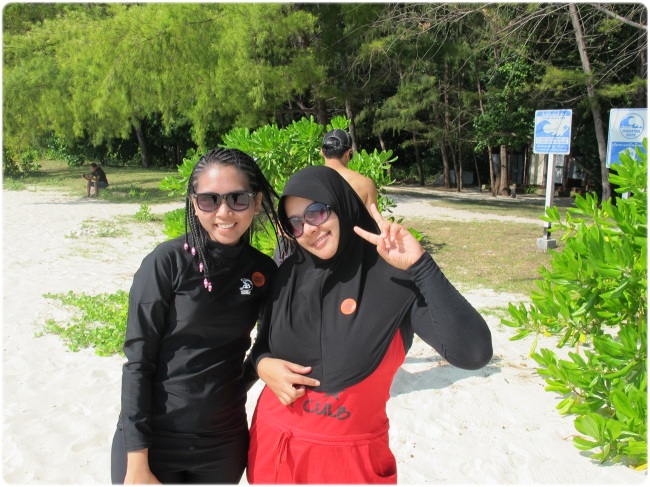 Love the beach and waters. But not many were swimming, most were just walking around, relaxing and taking photos. I was so surprised by the cleanliness of the beach. Wow. 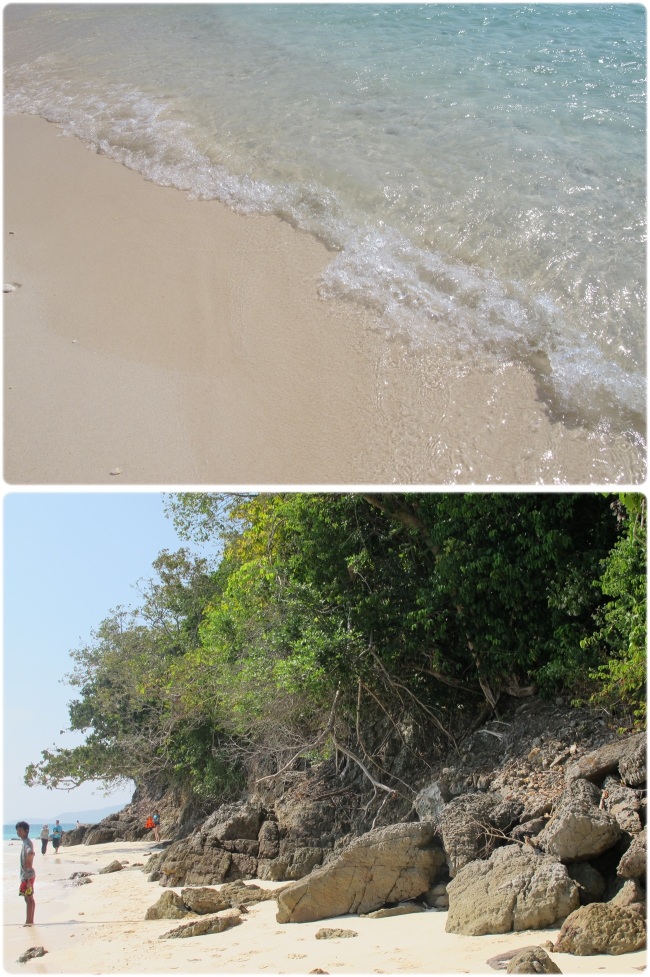 Our next stop! The beautiful Maya Beach.

The Maya Bay Beach was so clearly popular among tourists. It was really crowded and there were so many people on the beach. The blue waters were tempting and we just had to dive in! Even the sand were so soft! Apparently, a movie starring Leonardo Di Caprio was once filmed here and that was how the place got really famous.

I have never seen such beautiful waters in my life!

We could not get enough of how beautiful the place was. Snapped some photos before dipping ourselves into the waters! It was calling us! 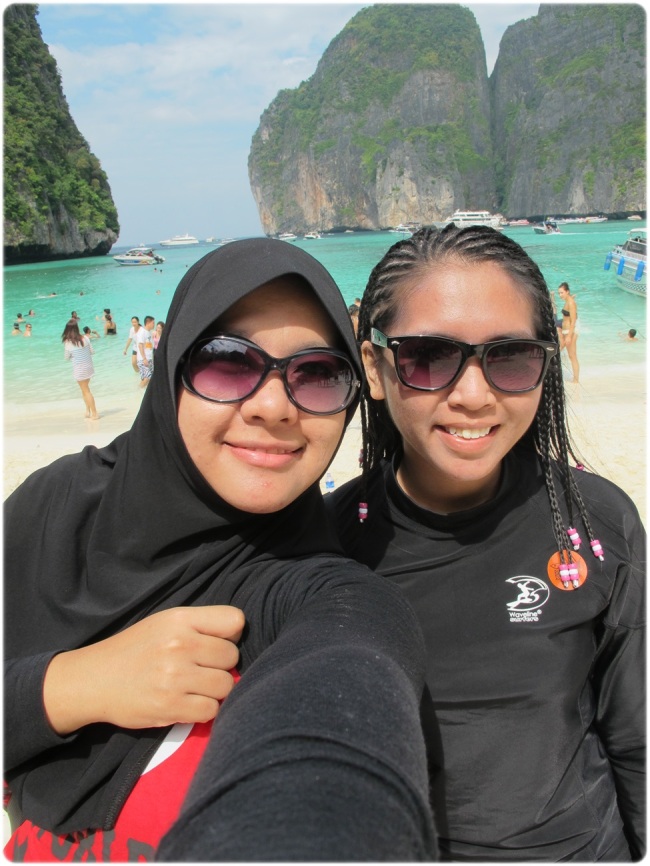 Happily playing in the water like a bunch of noisy kids.

Raimi had a water proof camera so we were tying to do all these poses underwater. I hope we did not look too stupid lol. 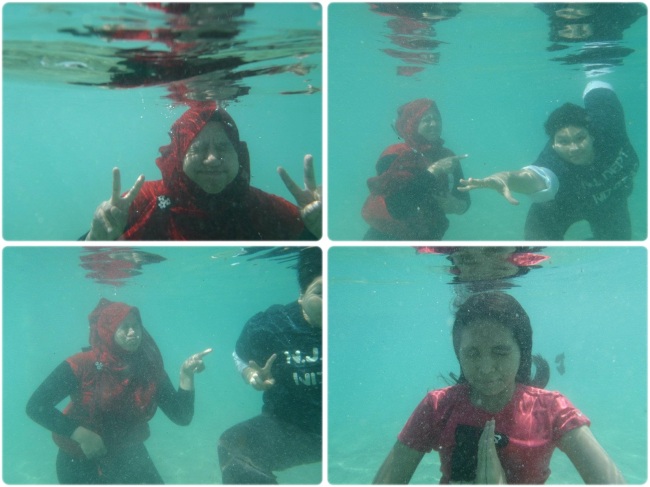 There were fishes everywhere even though we were pretty near the shore! We could see them so clearly because they were swimming among us!

I was trying to do a mermaid pose but I think I ended up looking more like a whale.

Leaving the beautiful Maya Beach to go to another island….

We were not allowed to get down from the boat this time. The guide simply explained to us about the place and allowed us to take some photos. This island was mostly populated with monkeys! Spot the monkey below!

I was the last to jump in.

I was pretty excited even though I cannot swim. I knew the life jacket will keep me afloat. In the same boat as ours, there was this Caucasian guy who seemed extremely terrified. In fact, he does not sit down at all throughout the whole boat ride. Surprisingly, he too, wanted to try snorkelling even though he could not swim.

So there I was waiting to jump down and he was right in front of me. He had already jumped down, but he was so terrified that he hung onto the boat. Which makes it harder for me to go down into the waters!

As I cannot swim, I was desperately trying to get the hang of breathing using the snorkelling gear. It was pretty difficult too do so because at the same time, the waves were pretty strong and I still could not breathe properly.

After about 5 minutes, I was still trying but I was thinking that since I was already in the waters, I might as well placed my head into the water to see the fishes, even though I could not breathe! That was how stubborn I was!

Seeing that I was still gasping for air and that the huge amount of salt water that has gone into my system, finally decided that I had to go up, I was still calm when I realised I could not move to bring myself closer to the boat. Was really trying not to panic when I called Fifi’s name a few times. She pulled me towards the boat and I finally went up.

A bit shaken but I was more disappointed that I did not get to see the fishes. Maria and Fifi really seem to be enjoying themselves!

Boo.  I really wanted to see the fishes. Dear grand kids and kids, I will make sure all of you go for swimming lessons when you are still young!

Our stopover for lunch.

This was the view from our table during lunch. By this time, I was very seasick. I almost felt like throwing up, so had some time to sit down and simply relax while the younger ones went walking around. 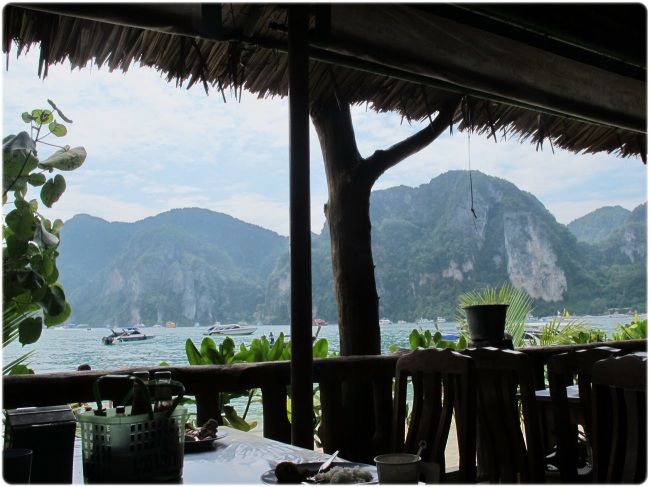 Saying goodbye to the sea before heading back.

We went back to the hotel and changed before heading to look for dinner at another street stall. 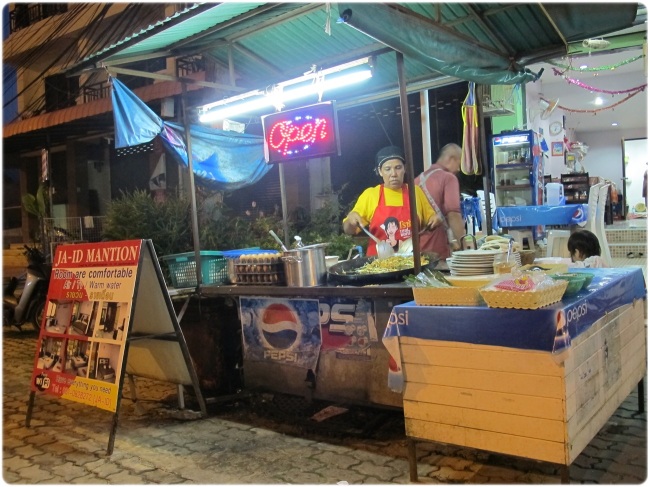 The food was great. The pad thai was spicy and yummy! We all ate the same thing.

I was actually still shaken by the day’s event, but was doing my best to keep calm.

Tomorrow shall be a better day!

← Chapter 2: Of elephant rides and hot springs
Chapter 4: Of bikes and muddy boots →