Our last stopover for the day was the Dead Sea. I was excited to be at a place full of history and was thrilled that the organizer had planned some time for us to have late lunch and some time to chill by the Dead Sea.

The Dead Sea is in southern Israel on the border between Jordan and Israel. The sea is fed by the Jordan River and is unique in having a salt level seven times stronger than the ocean.  As we know the Dead Sea is the lowest point on Earth at 400 meters below sea level. Muslims see this as miraculous that the Quran calls the area the “lowest point on Earth” before science had advanced enough to prove this.

I am always amazed by the vast blue sky. I guess I rarely get the chance to see the sky back in Singapore because I live on the second floor and there are tall buildings everywhere around our flat.

There was a pool but everyone was more interested in getting into the Dead Sea itself. 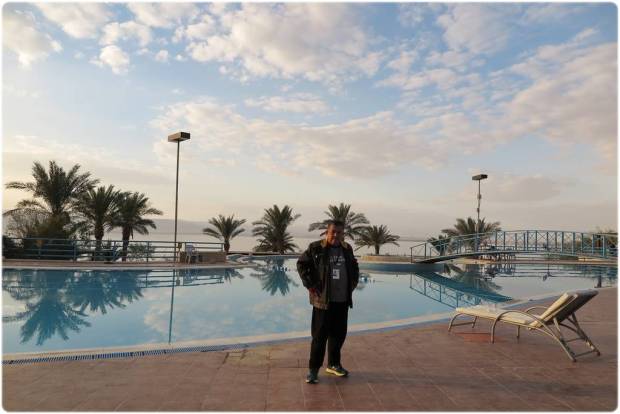 Imagine being at a place that is full of history way before you were born. The steps down were rocky and steep and I do worry about my knees. Le parents decided that they would just stay by the concrete area by the pool and I was contemplating of doing the same thing. However, le bestie and family were persuading me to go down the beach of Dead Sea because, come on, when else will I get another chance to be here?

There was no support, no rail, nothing while I slowly went down the stairs but alhamdulilah through His grace, I made it down without falling. My injured knees were shaky and a little sore from all the walking for the past few days.

The gang from the troop were all getting ready for a dip but of course I did not bring any extra clothes. However, seeing how le bestie and her mum went into the water with no extra clothes too, inspired me to do the same. Ok, I shall only soak my legs into it, just to get a feel of the water.

The amount of salt in the water can be clearly seen.

The moment I stepped into the water, I was cringing in pain as my feet had blisters and the salt in the water were obviously reacting with it. They said that salt has natural healing properties for cuts and itches so after bearing with the pain for a while, the pain miraculously disappeared. The cuts and blisters on my feet also appeared smaller. 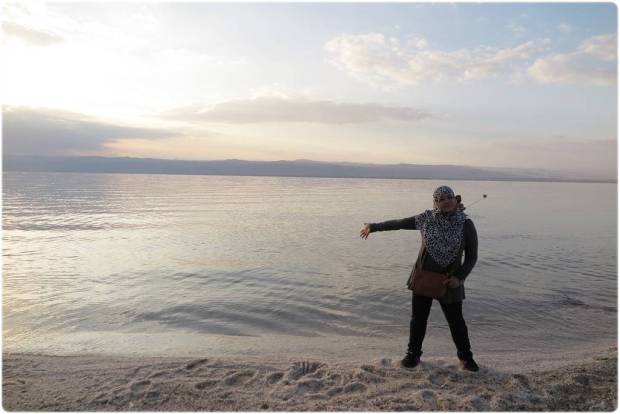 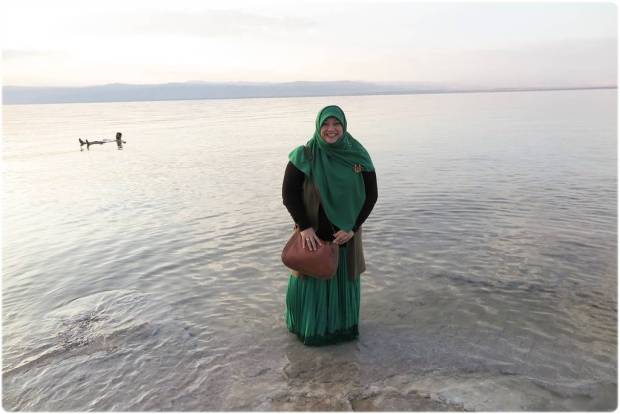 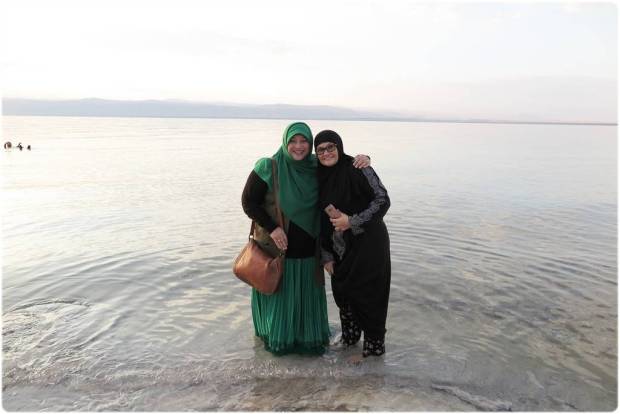 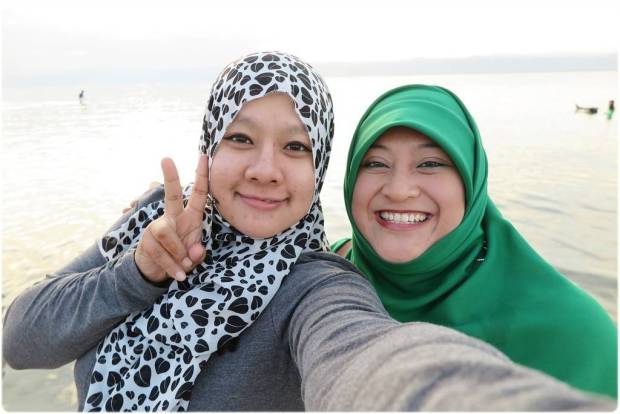 The sun was starting to set and we were told to clean up and get ready to go back. 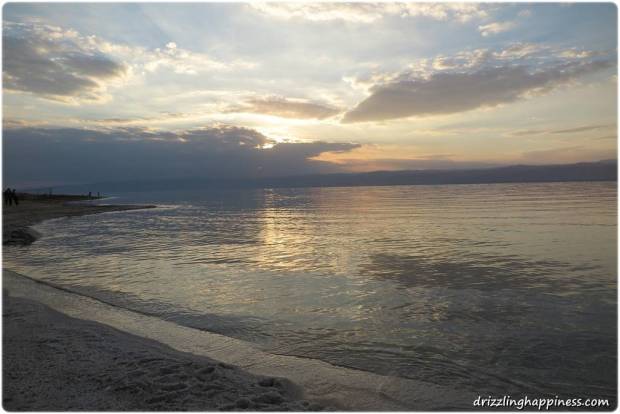 Le bestie and family. Her dad was even able to completely dip in and float inside the sea. Wish I was more daring to soak myself completely but I would not want to dirty the seats of the bus with my wet clothes. Time went by too fast.

Le parents were also enjoying themselves eating nuts and chilling by the sea.

When the sun sets, the place was even more beautiful.

Taking our last few shots before leaving. It was also starting to get colder. 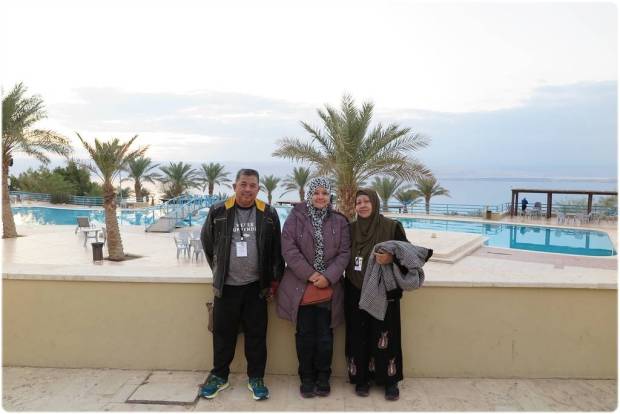 Scientists tell us that the earth in this area has large deposits of sulphur and that this is the reason that no living thing can survive here. Islamic belief teaches that the inhabitable environment of the Dead Sea, where no marine life can survive, is the sign left by Allah to warn of people of repeating the sins of Sodom. Quran interpreters believe the Allah punished Sodom with a natural disaster such as an earthquake or volcanic eruption and indeed sulphur is one of the elements resulting from a volcanic eruption.

The punishment of the people of Prophet Lut

The Qur’an describes the people of Sodom as ignorant, wicked, evildoers who rejected God’s call to righteousness. The people were murderers, thieves, and openly practiced immoral sexual behavior. Lut persevere in preaching God’s message, but found that even his own wife was one of the disbelievers.

The punishment of Sodom was the worst punishment ever brought upon people by Allah and even today Muslims believe that we see the evidence of this punishment in the Dead Sea environment and sea. The high saline content of the sea makes it impossible for any living organism – fish or plant to survive in the water. In Islam the Dead Sea is a sign of God’s punishment and warning to mankind not to sin.

The Qur’an says, “And to Lut, too, We gave wisdom and knowledge; We saved him from the town which practiced abominations. Truly they were a people given to evil, a rebellious people. And We admitted him to Our mercy; for he was one of the righteous” (Qur’an 21:74-75).

If one’s intention in visiting the Dead Sea is not for mere tourism or entertainment, but rather to reflect upon the oppression that took place there and the resultant punishment, then it would be permissible to go there. Indeed, the fruit of such an intention is that one turns to Allah in one’s own life and fears falling into transgression.

It is also worth noting that although the Dead Sea itself is a place of past punishment, the general area is still part of the Levant (sham), which is a place where many prophets lived and walked (peace and blessings be upon them all), and also where many companions and pious early Muslims are buried. Thus, there is blessing in that overall region that one can benefit from, and Allah knows best. 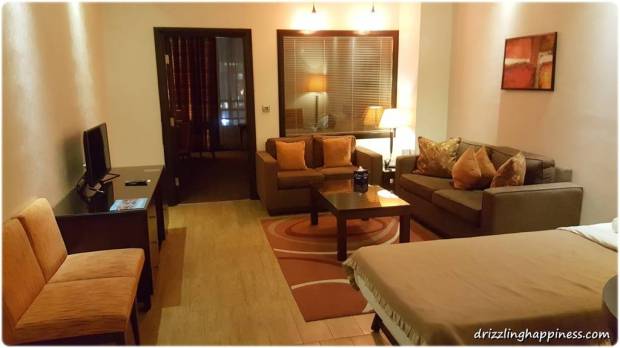 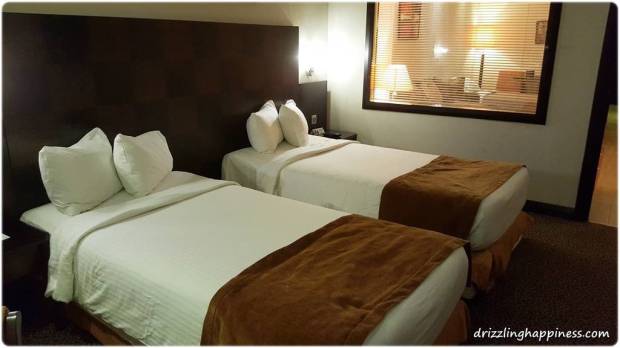 Back in Amman for one day of rest before heading to Madinah, inshaAllah.

One thought on “BAITULMAQDIS UMRAH CHAPTER 12: Reflecting by the Dead Sea”