Abu Hurayrah (ra) relates that the Prophet (saw) said, “You should not undertake a special journey to visit any place other than the following three Masjids with the expectations of getting greater reward: the Sacred Masjid of Makkah (Ka’bah), this Masjid of mine (the Prophet’s Masjid in Madinah), and Masjid Al-Aqsa (of Jerusalem)”. In another narration the words are, “For three Masjids a special journey may be undertaken: The Sacred Masjid (Ka’bah), my Masjid and Masjid of Jerusalem (Al-Aqsa). (Muslim, Bukhari, Abu Dawud)

No doubt this was the most exciting part of the our visit to Jerusalem. There are so many stories and history behind Al- Aqsa mosque. As stated in the hadith above, it is the third holiest site after Masjidil Haram in Mecca and Masjid Nabawi in Madinah.  It is the location that the Prophet Muhammad was transported to during the journey of Israa and Miraaj. It was the scene for the most extraordinary gathering in the history of mankind – when every Prophet that ever lived were gathered together for a congregational prayer behind Prophet Muhammad.

We were told that it would be a few minutes walk from our hotel to the mosque so we walked in high spirits. The plan was to go there for Subuh prayers, thus we had to leave the hotel pretty early.

It was NOT a few minutes walk. It was almost a 45 minutes walk. Plus, it was freezing cold in the early morning so we were all wrapped up. Imagine how happy we were when Dome of the Rock first came to view. 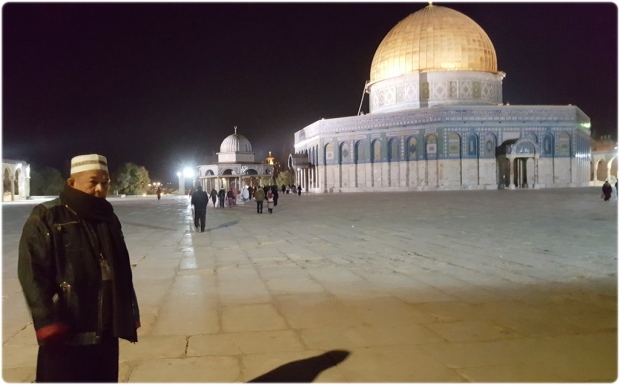 The entrance of Al-Aqsa mosque. 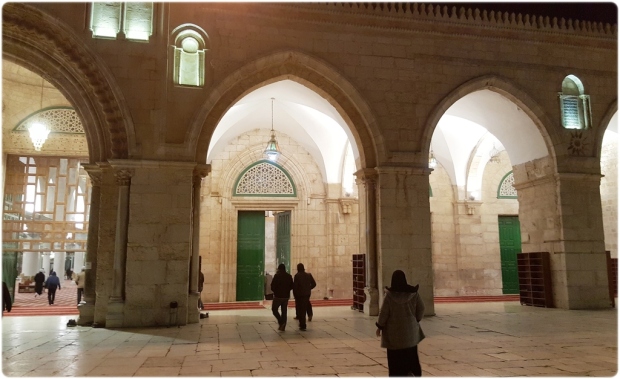 The insides of the mosque while waiting for the azan for Subuh. 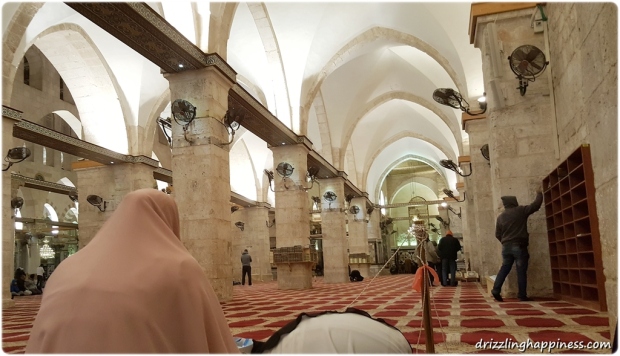 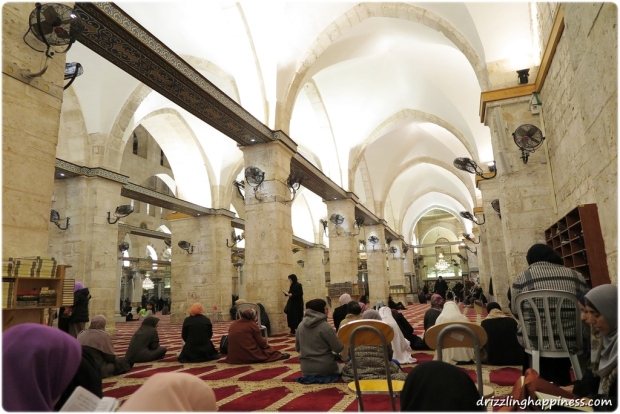 It was just so peaceful inside and there was quite a crowd of foreigners from Asia too.

Abu Darda (ra) relates that the Prophet (saw) said, “A prayer in Makkah (Ka’bah) is worth 100,000 times (reward), a prayer in my Masjid (Madinah) is worth 1,000 times and a prayer in Al-Aqsa Sanctuary is worth 500 times more reward than anywhere else”. (Tabarani, Bayhaqi, Suyuti)

Abdullah Ibn Umar (ra) narrates, “We prayed along with the Prophet (saw) facing Al-Quds (Jerusalem) for 16 or 17 months. Then Allah ordered him saw) to turn his face towards the Ka’bah (in Makkah). (Bukhari)

Before the Kaabah, here at Masjid Al-Aqsa, was the first Qiblah (direction of prayer).

Imagine the surreal feeling of being able to do our prayers here. MashaAllah! The minute we stepped in, all the aches and pain in my legs from the long walk disappeared. 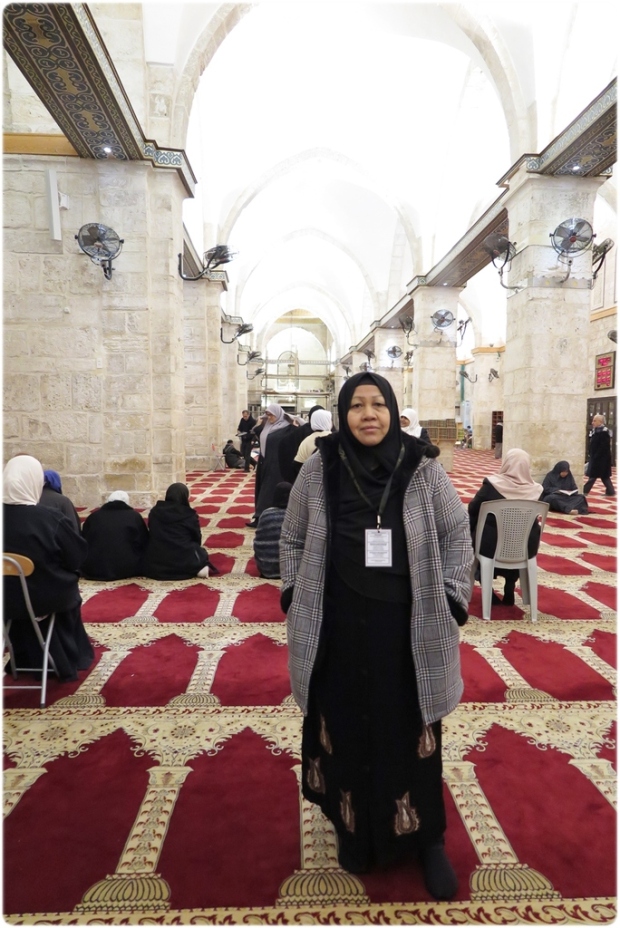 The imam leading the Subuh prayer had the most beautiful voice. He read the surahs in such a soothing melody that I almost cried even though I do not know the full meaning of the surahs recited. 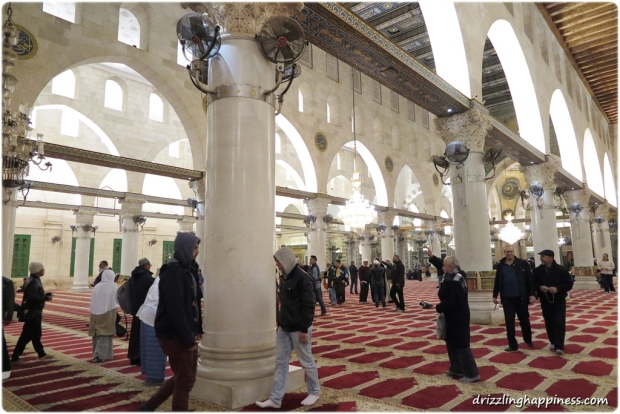 Standing in front of the mosque. Look at the huge entrance door, as if it was waiting for a huge crowd of jemaah to come into the mosque. 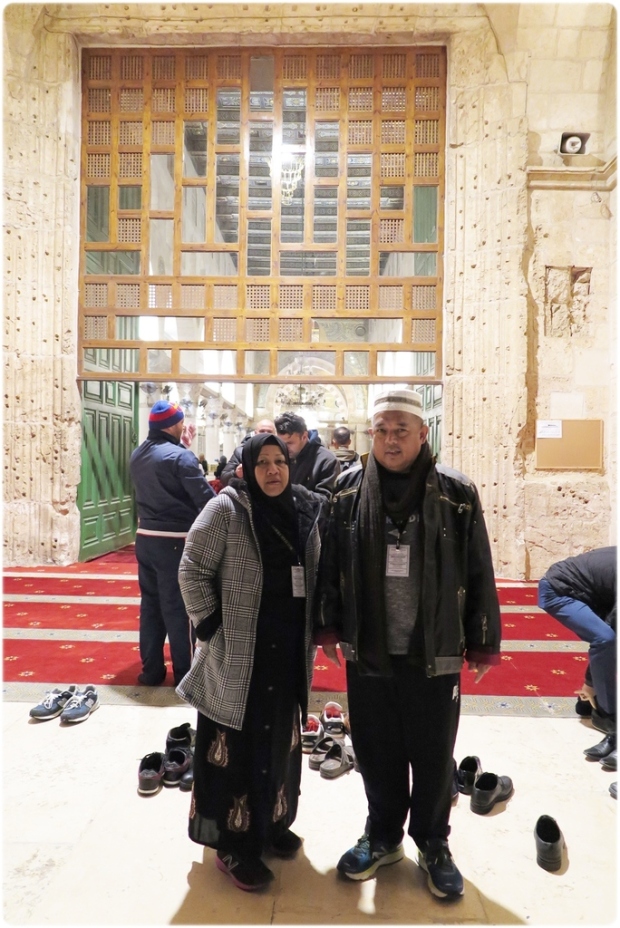 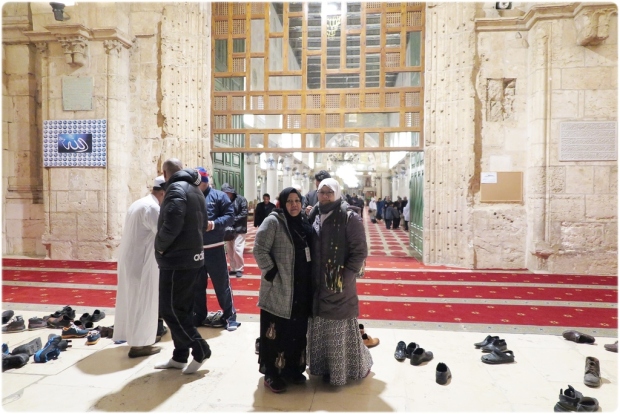 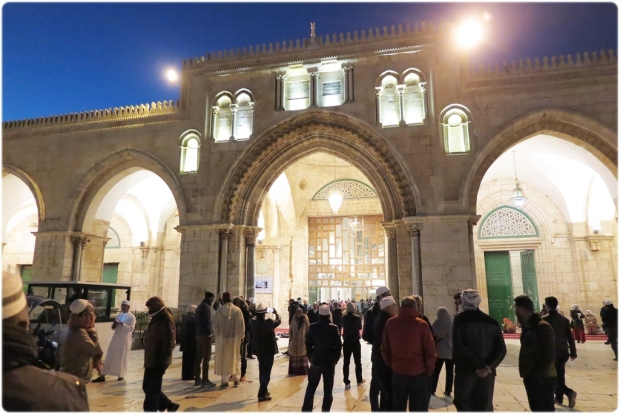 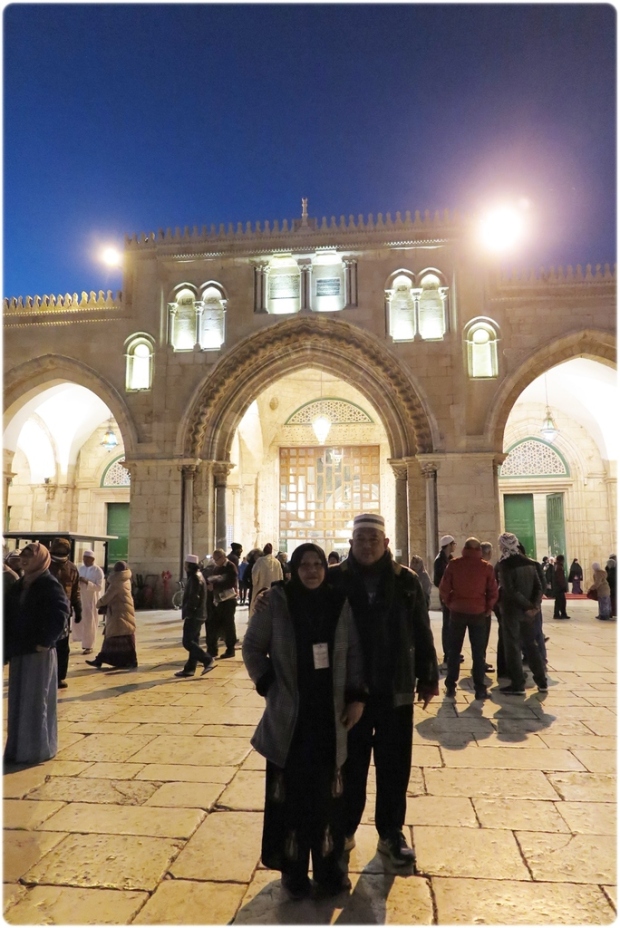 From the entrance of Al Aqsa mosque, we could see the Dome of the Rock. 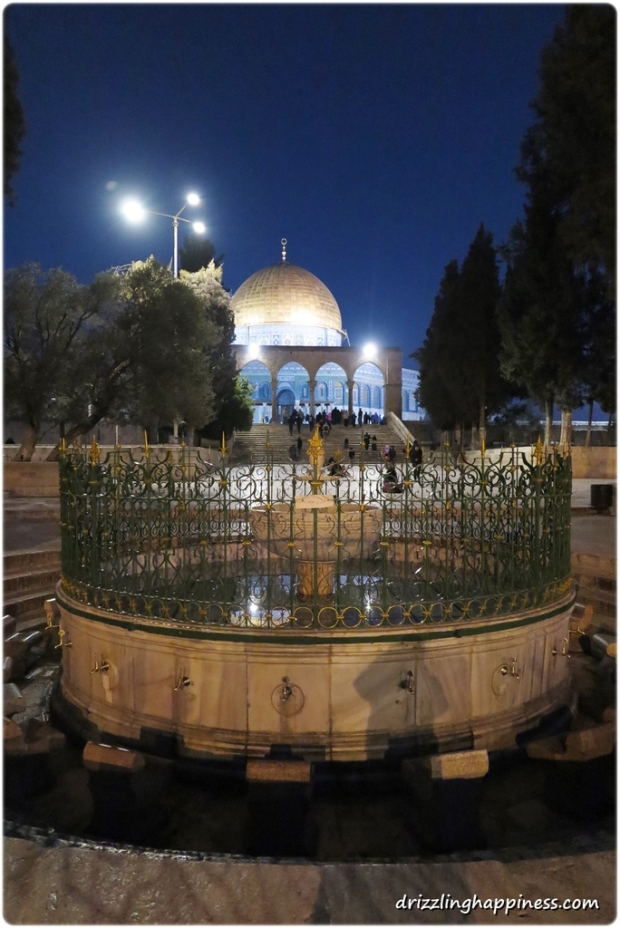 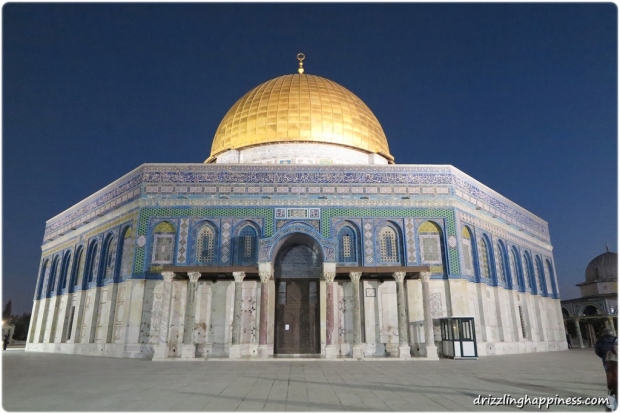 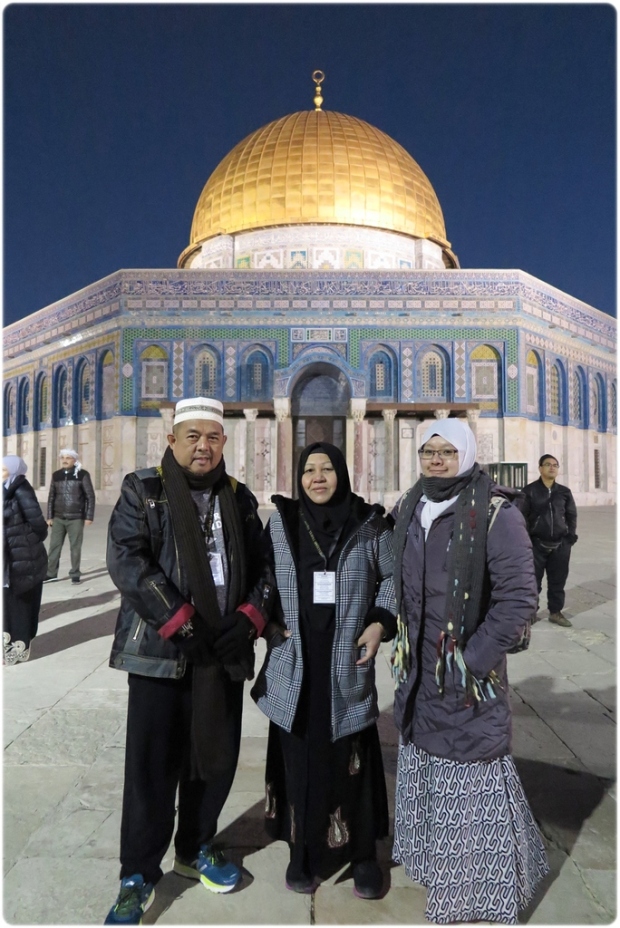 I was awed by the architecture but I also realized it has gone through a tremendous amount of constructing and deconstructing throughout the years.

Walking back was another challenge. The pathway was rocky and full of slopes and steps. I was glad I was wearing my knee guards. We took a long time to walk back that the sky was starting to be brighter. 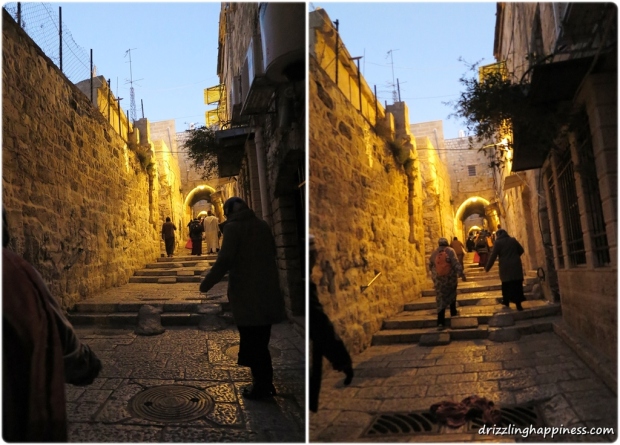 See the huge and tall walls? The Al Aqsa mosque is smacked right in the middle of it. There are no other way to access it. The only way to get there is to walk. I guess it was purposely made like this so that it not so easily accessible.

Walking inside the walls was like walking in a maze. We were so happy to be out of the walls, into daylight. 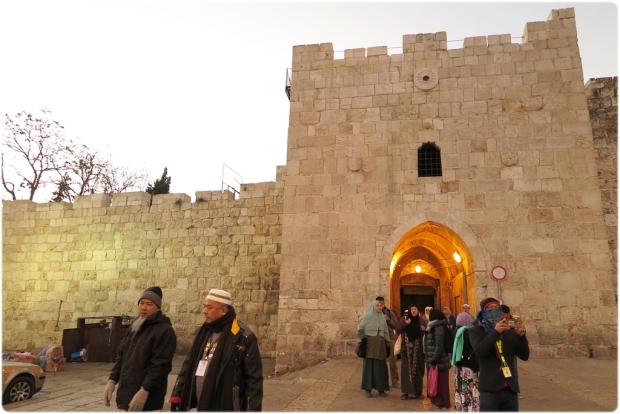 It was such a long walk that Mum needed to sit down for a short break. While doing that, she made a new friend. 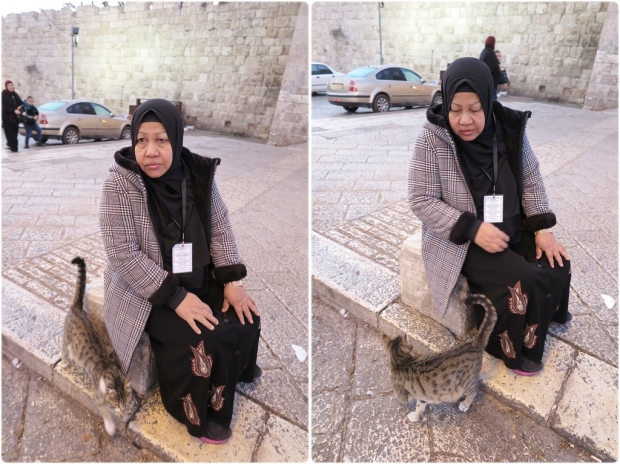 In these difficult times we must not get defeated. Israel will be defeated in the future and Jerusalem will become the capital of the Islamic Khilafah inshAllah. The following are evidences from the Quran and hadith for this.

Allah (swt) States: “And we decreed for the Children of Israel in the Scripture, that indeed you would do mischief on the earth twice and you will become tyrants and extremely arrogant! So, when the promise came for the first of the two, We sent against you slaves of Ours given to terrible warfare. They entered the very innermost parts of your homes. And it was a promise (completely) fulfilled. Then We gave you once again, a return of victory over them. And We helped you with wealth and children and made you more numerous in manpower. (And We said): ‘If you do well, you do good for your ownselves, and if you do evil (you do it) against yourselves’. Then, when the second promise came to pass, (We permitted your enemies) to make your faces sorrowful and to enter the mosque (of Jerusalem) as they had entered it before, and to destroy with utter destruction all that fell in their hands. [And We Said in the Taurat (Torah)]: ‘It may be that your Lord may show mercy unto you, but if you return (to sins), We shall return (to Our Punishment). And We have made Hell a prison for the disbelievers” [TMQ Al-Isra, 17:4-8]

InshaAllah, this land will come back to us. You may read more about Al-Aqsa mosque here.

May you be given the chance to visit the Al Aqsa mosque at least once in your lifetime. It is truly an extraordinary experience and this entry simply does not do justice to it.