Since we started our day pretty early, we had plenty of time. By 12 pm, we were done with both museums and were on our way to explore the famous street arts in Georgetown.

If you are taking cab, you have to tell the cab drivers what you are looking for so that they can bring you to the exact location. The entire Armenian street area are homes to a few a famous street art and you will know you are there because there will be tourists lining up to take photos with it.

Our first stopover here because I recognize this street art from my research lol. 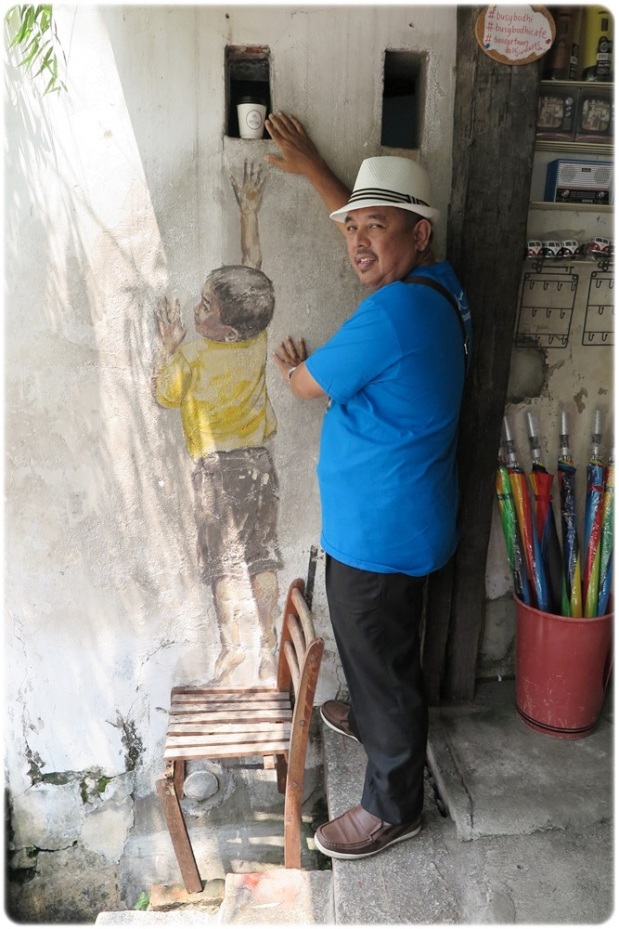 Anyway this cosy and hipster cafe is actually called ‘Busy Bodhi’ cafe lol. Check out the ‘No Wifi’ sign. 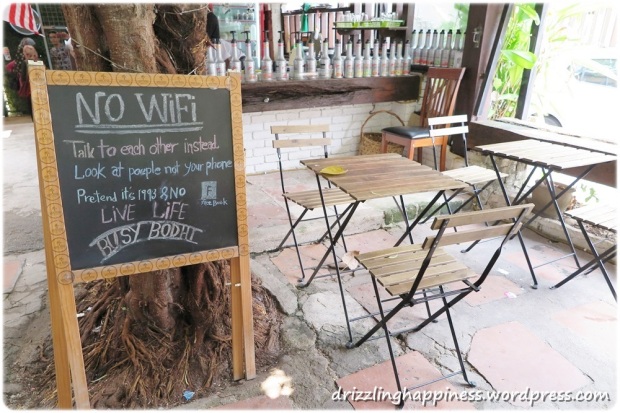 I love how the cafe was brightened by the colourful umbrellas dangling from the ceiling.

I also loved how everything in the cafe was so old school., like it has been nicely preserved for many years. 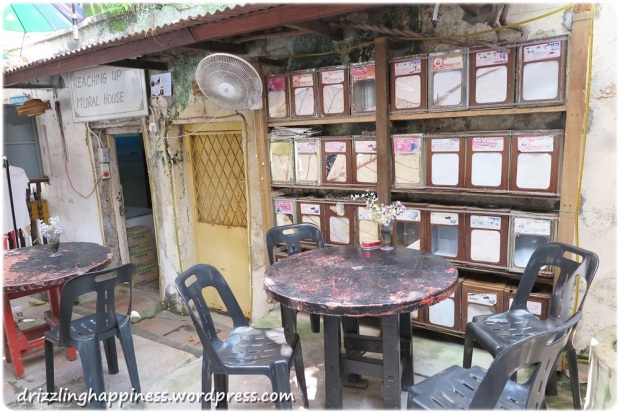 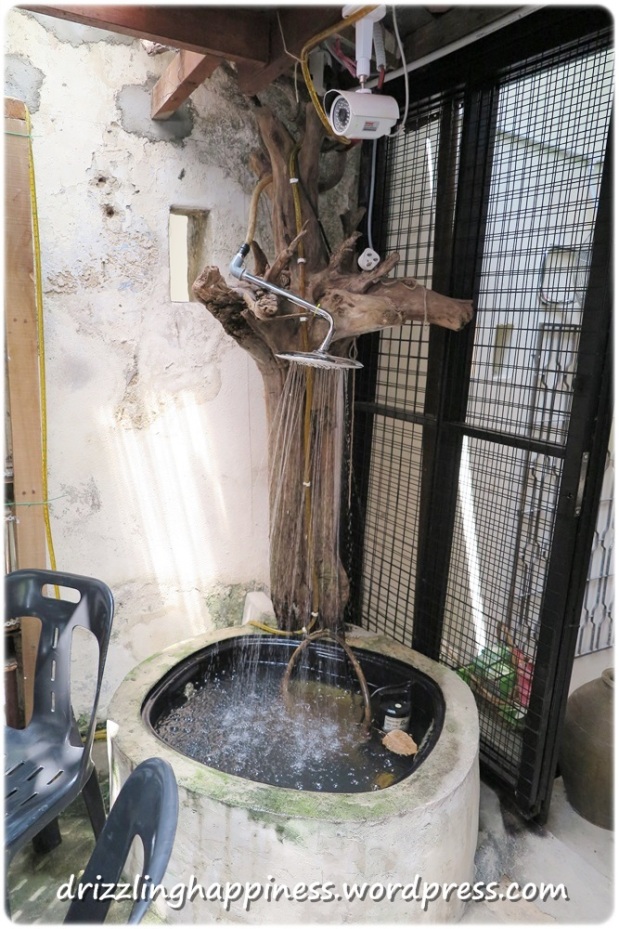 They sell ice drinks and coconut ice cream! It was perfect in this warm weather! 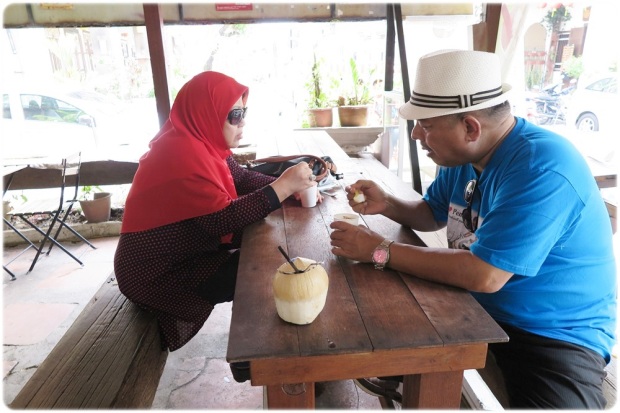 They also sell souvenirs. Actually the entire street is the best place to look for souvenirs. They are cheap and you can buy in bulk for your friends back home.

In the beginning of this trip, I thought that le parents might be too tired to come with me to explore all the street arts so I was mentally prepared to wander off by myself. I thought that the best way to check them out was to walk, but alas, Mama saw the trishaw and wanted to ride in one so that I did not have to be alone exploring the street arts.

How sweet, but the trishaw could only carry two people so I told them it is ok for me to walk. But, Baba saw this…………

….and suggested that I rent a bike and follow them closely behind. Furthermore, the trishaw uncle knew where exactly the street arts were and could lead the way. I did not have to read the map. Yay! 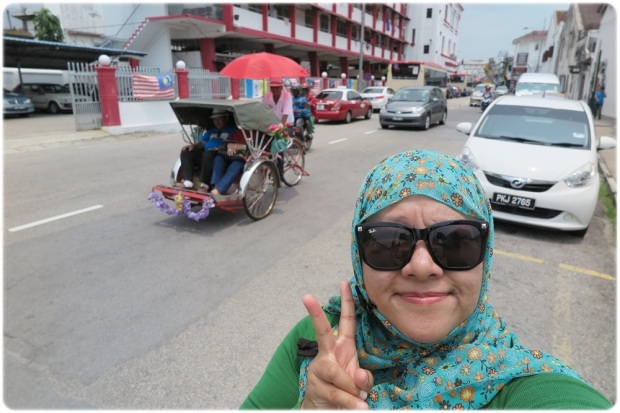 “Little Children on a Bicycle” Mural, Armenian Street. This was definitely one of the famous street arts. There was a long queue of people who was waiting to take a photo with this mural. 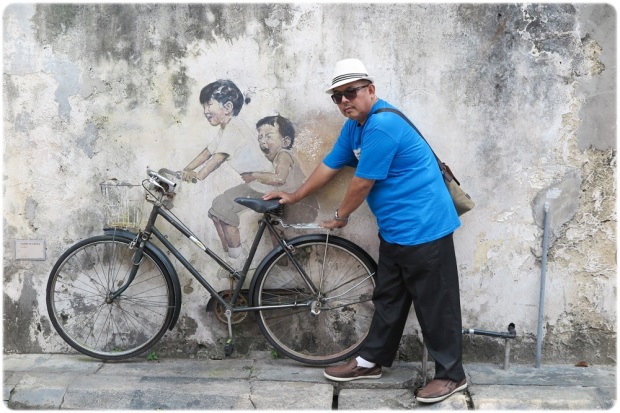 Second stop. The trishaw uncle told me to go in…

This was another famous one. In fact, there was a mini traffic congestion here because there were so many people waiting to take photos. ‘Boy on Bike’.

While cycling, I had to be careful of the traffic too since there were quite a big number of lorries and big vehicles on the roads. I was slightly nervous cycling on such busy roads but the big vehicles and cars usually gave way to the cyclists and trishaws. Wow. Amazing. I was relieved and I could explore with more peace of mind. 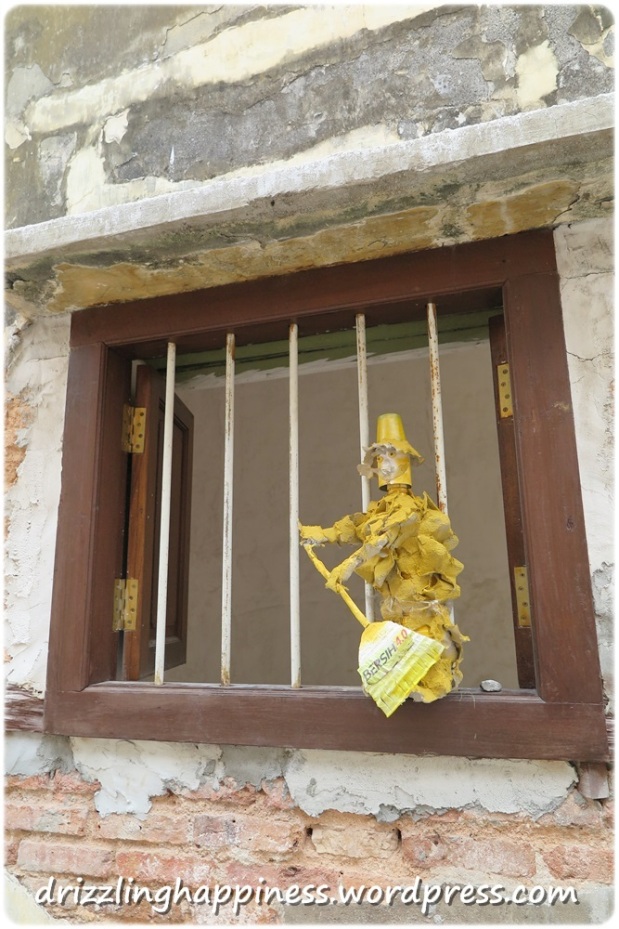 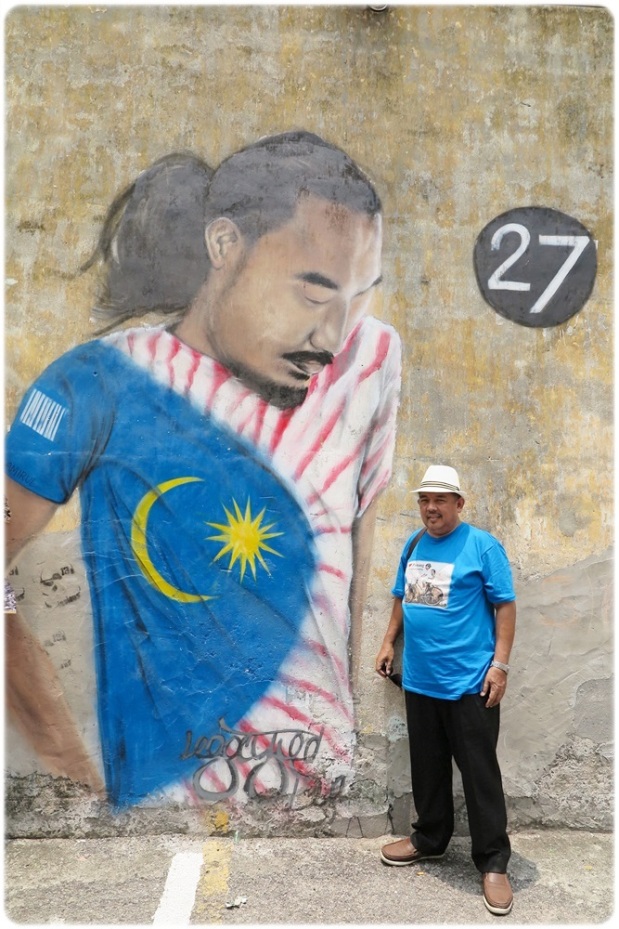 “The Real Bruce Lee Would Never Do This” street art mural by ASA (Artists for Stray Animals) in George Town.

A wall art mural of a local pastry shop ‘Ming Xiang Tai’ which is located along Armenian Street Ghaut. This painting which depicts two children trying to reach out to the buns basket on the bicycle can be found on a wall facing CF food court, further down the road from the giant cat mural. 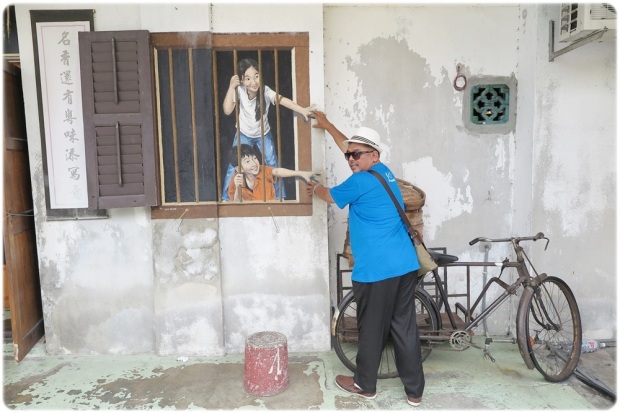 The weather got pretty warm and I was pretty sure I was getting toasted on the bike so I went to buy this cap from a shop by the streets. It is an EXO cap. I am not a fan but I hate what the sun can do to my skin.

There were more…. my dad trying to do the angry gangster pose. 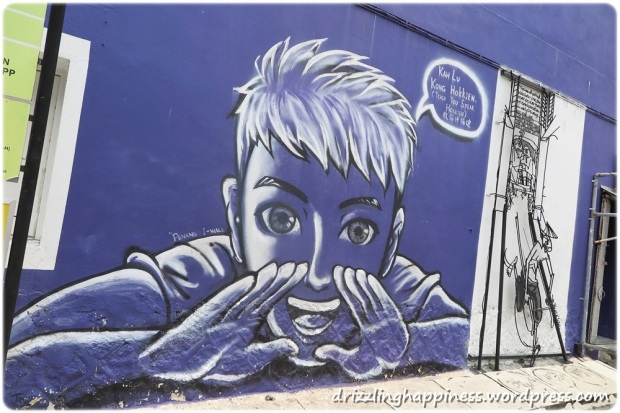 Overall I really enjoyed the experience of cycling to go explore. I wanted to stop by a few shops along the way but the trishaw uncle really expected me to follow closely so I was not able to stop as freely as I wanted. 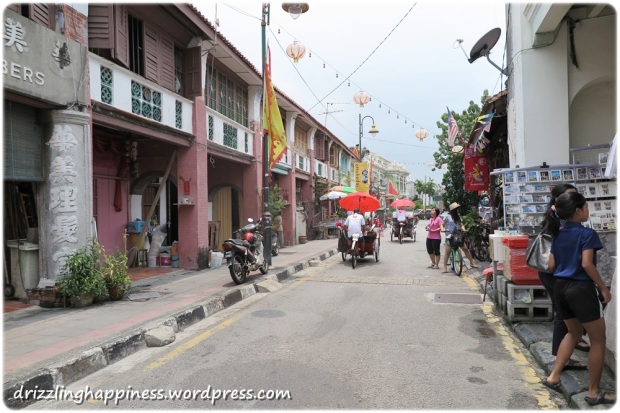 Anyway, he was really nice and lead the way. I am pretty sure my parents were not that light but he cycled for more than an hour. If you are in Penang and looking for a trishaw uncle, look out for this kind uncle! 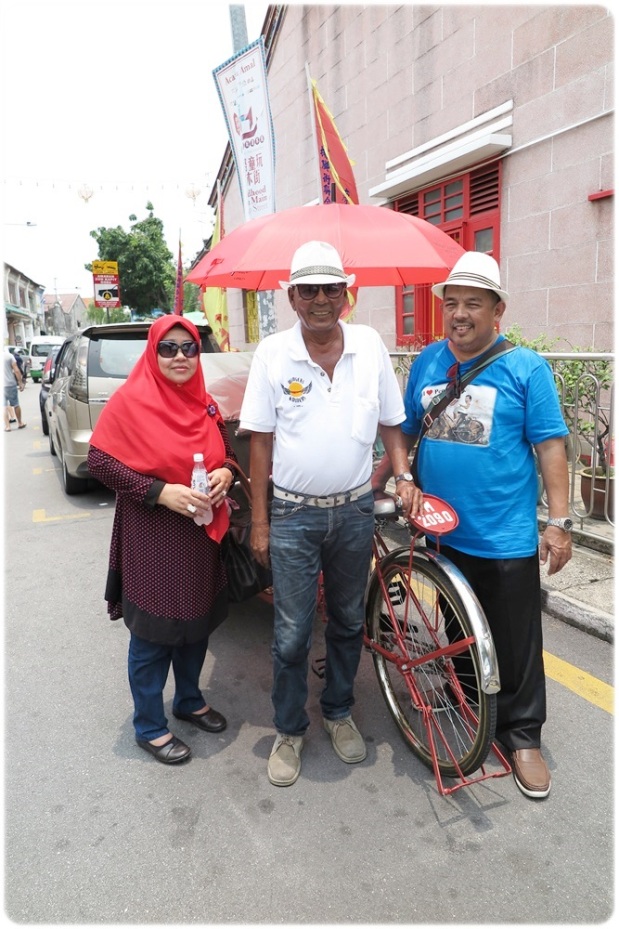 It seemed that a lot of tourists were also cycling around like me. I saw tourists from all over the world cycling around looking for murals and street art, some were armed with dslr cameras and map. It felt like we were in a big treasure hunt game. Lol. 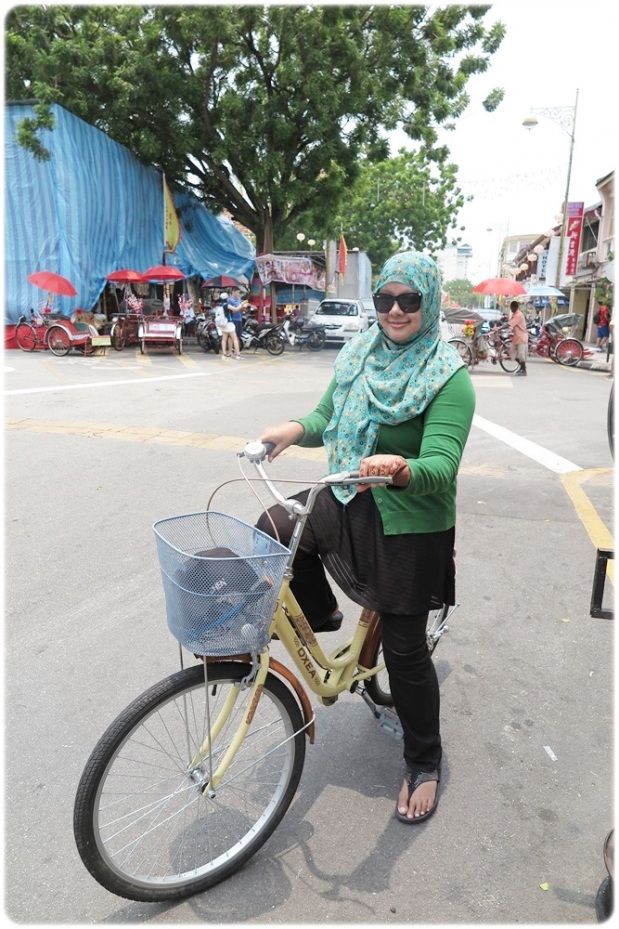 If you are going to explore the murals, be sure to carry a drink with you. It was pretty hot and I had to stop to buy a drink. Cycling around was definitely better than walking! I am glad I did not walk! It would have taken ages! Definitely worth it to place explore. This entire place was named as UNESCO Heritage site. Some of the murals in the map could no longer be seen because of the inevitably fading no thanks to the weather. Better to go see it all now before it is gone.