Beyond Beautiful Switzerland Chapter 11: Our view from Jungfraujoch top of Europe

Today was the first day of Ramadhan and despite being away from my country, I wanted to give a go at fasting. However, since it was summer, it meant that the day is longer than night. This also meant that I would be fasting for a longer period of time. Typically back in Singapore our fasting begins from 5.30 am to about 7 pm. Here in Switzerland in summer, the fasting starts from 3 am and maghrib was at 9.30 pm.

I think it would be an interesting experience and I was really determined to make it  work. Thus, I woke up at 2.30 am in the morning to sahur. I only had granola and fruit yogurt from Starbucks and a cup of coffee. After Subuh, I went back to sleep.

We woke up at 7 am to get ready to go out. We were supposed to be visiting making our way to Jungfrau. Our luck with seeing Matterhorn live was non-existent so we really hope we would be able to catch the magnificence from the Top of Europe.

The train rides again are my favourite thing about this trip. Everything was simply too beautiful.

So here we are again trying to get that perfect window shot. 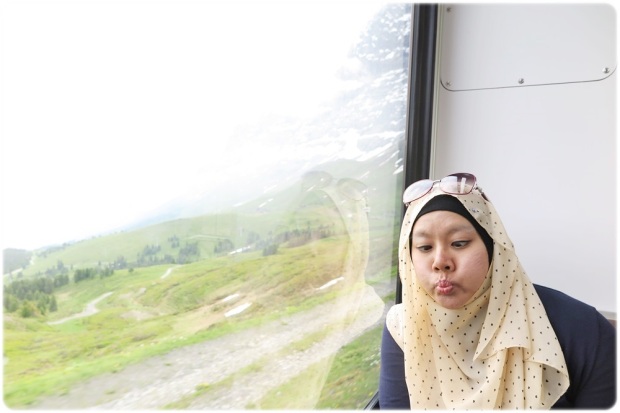 It was really not easy as the train was moving and that meant that we had to be quick. These three were the best among the countless number of other shots. Lol.

We were praying hard for good weather today and it seemed pretty good so far.

We got more and more excited when we could see the snowy capped mountains. 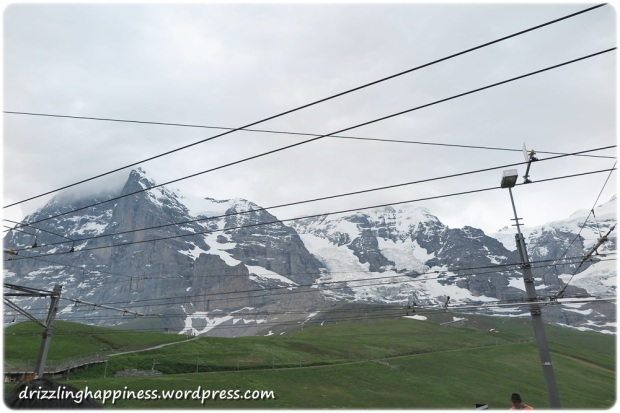 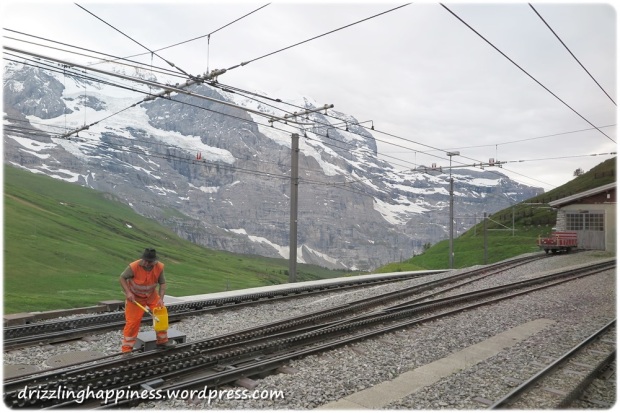 Actually the train journey there was about 4 hours long and towards the end, we were pretty much in a tunnel with nothing much to see. I ended up sleeping. Lol. 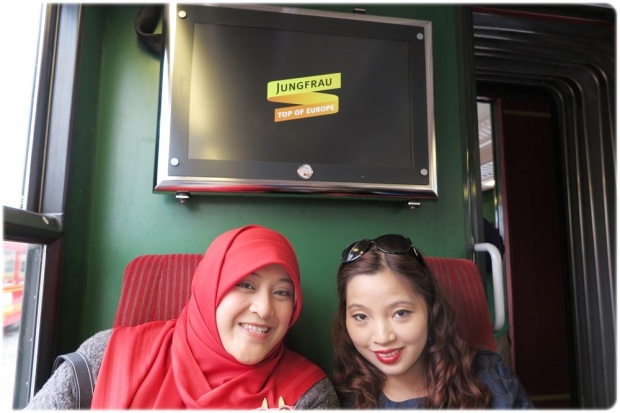 I love the greenery because I felt like it was cleansing my eyes. 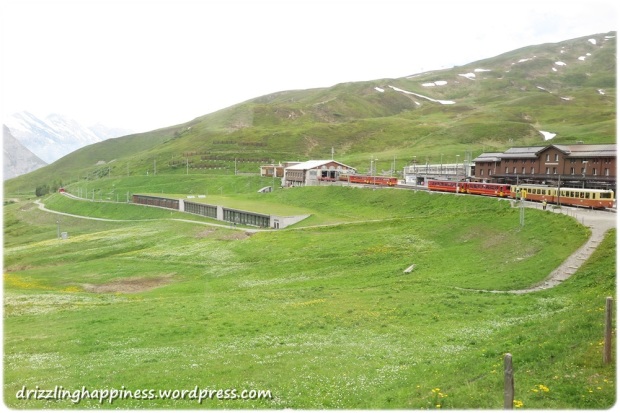 We had a pitstop while the train was in the tunnel and passengers were allowed to go out and take some photos. However, I just woke up and was feeling lazy and grouchy so only Bon went out to take photos of the view. I figured that the view will be better up there anyway.

Oh well, I was wrong. 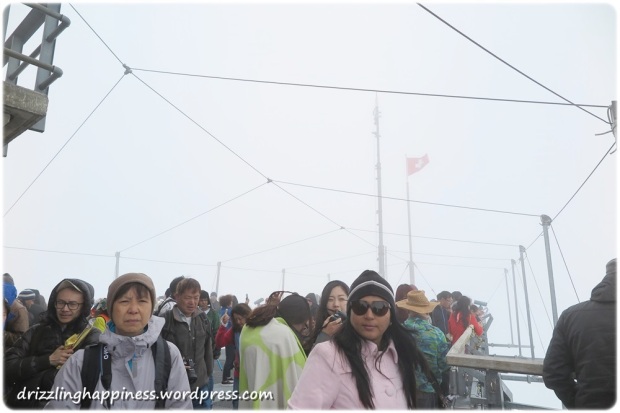 Sigh. To say that we were disappointed would be an understatement. I mean, we came here from halfway across the world not to see this but I guess the weather is pretty unpredictable anywhere around the world.

There was nothing much we could do except to take photos with the fog.

We took turns. It was freezing cold. I was not ready for this temperature too. I think it was -2 degrees. My light jacket was not sufficient to keep me warm. 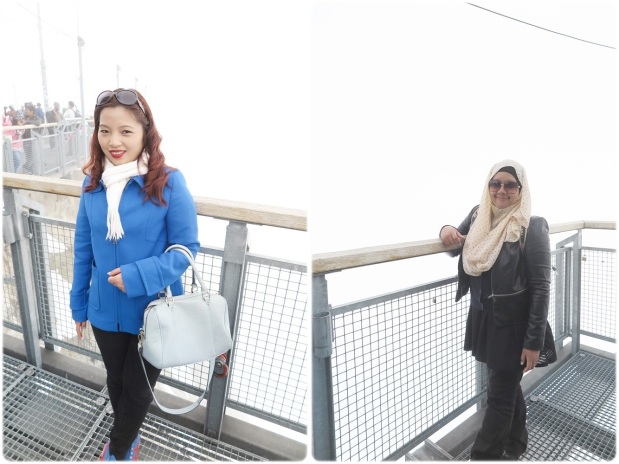 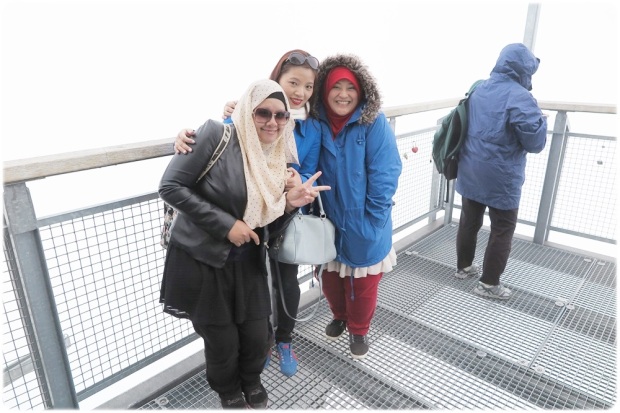 After we were done, we went inside quickly. There was nothing to see anyway.

An ice tunnel that I was reluctant to go in because I was freezing cold. 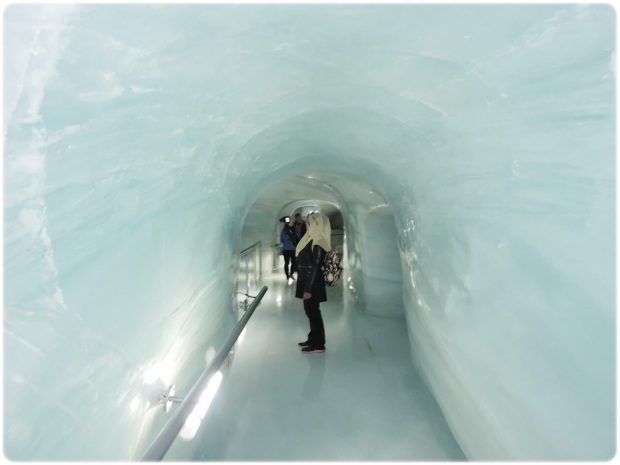 It was pretty and a little slippery so if you do go inside it, be careful and watch your steps.

The Jungfraujoch railway station, at an elevation of 3,454 metres is the highest in Europe. It lies east of the saddle, below the Sphinx summit, and is connected to the Top of Europe building, which includes several panoramic restaurants and a post office. Source here.

I was fascinated with the history of the tunnel. I am sure it was difficult to drill and built the tunnel back then. So many workers lost their loves and this part of the tunnel was dedicated to them. 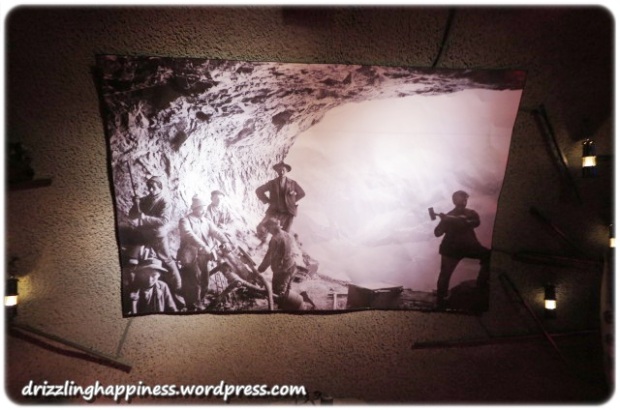 We ended the visit with a visit to the chocolate store.

Lindt chocolate from Top of Jungfrau, we were not going to miss the opportunity to buy chocolates here.

I was not only feeling bumped, I was also pretty breathless. I am not sure if it was the altitude, the cold or due to the fact that I was fasting.

Oh well, I guess I can rest in the train on the way back. Going back down and we still see the fog haunting the beautiful mountains.

We decided to make most of the day and went to explore Bern.

By this time I was dizzy and having a a horrible migraine. It was already 6 pm so it would be stupid to eat now and waste a whole day of fasting. I think the migraine came about when I fall asleep, wake up, fall asleep again….. its inevitable.

I went back and showered and then took a nap. My friends actually waited with me until 9.30 pm before they have their dinner too. That was so sweet. I was sure they must be hungry to wait for me. So there we were eating at 9.30 pm and spending our time chit chatting.

Thanks dearies! It was after all, our last two nights together.

3 thoughts on “Beyond Beautiful Switzerland Chapter 11: Our view from Jungfraujoch top of Europe”