Beyond Beautiful Switzerland Chapter 6: Playing hide and seek at Rotenboden

Imagine waking up to this view of the lake in Montreux. 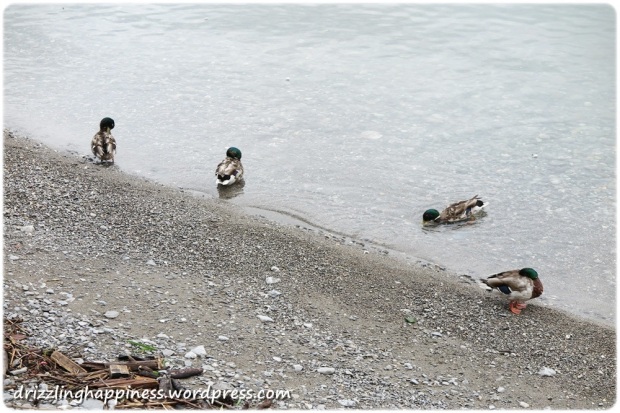 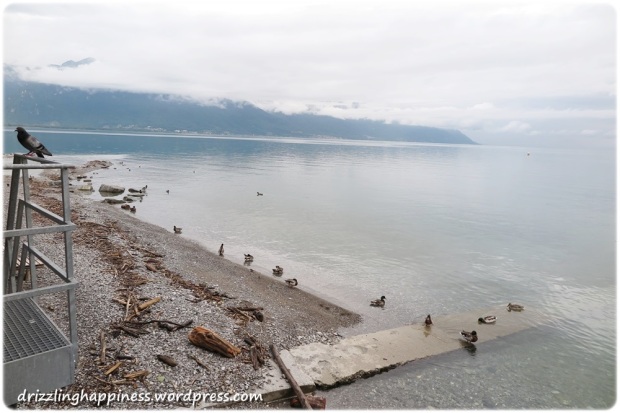 We were up early because we are taking the train out to Zermatt. On the way to the train station, we walked by the lake and the bestie and me were like excited kids seeing this beautiful view, even though it was not our first time here. 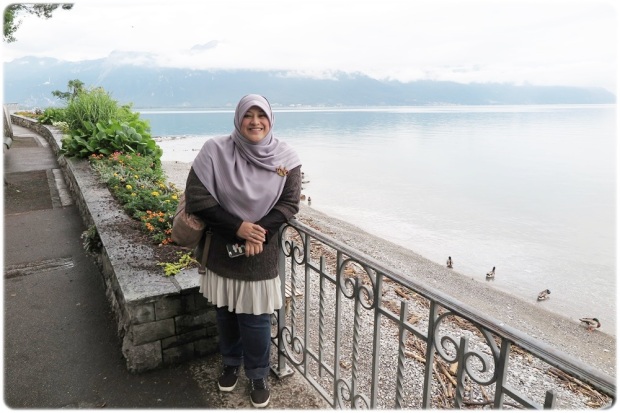 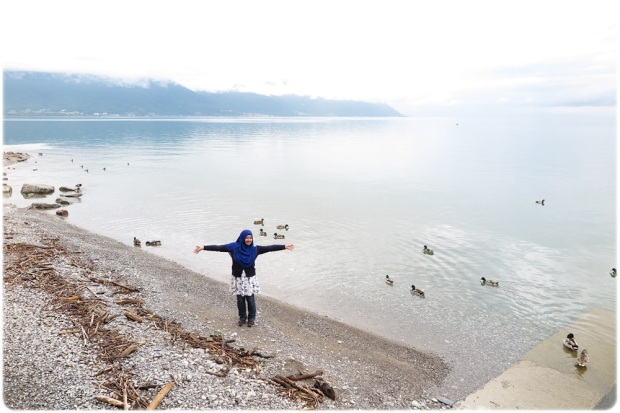 Bon had to remind us that we were catching a train. I would have forgotten the time while playing with the ducks.

The best thing about this trip are the train rides. Seriously, I don’t think you will get to see the views we see if you are taking the coach. The train rides allow you to see the ‘real’ life of the locals, and of course travel with them too.

On the way to Zermatt, we were blessed with these kind of views. I am one who fall asleep during train rides but it was hard to fall asleep when there were views like this right outside the window.

It opened our eyes to the countryside and it is impossible to hate the beauty of the views. Due to that, we kept trying to take the perfect selfie or ‘emo’ shot by the window. 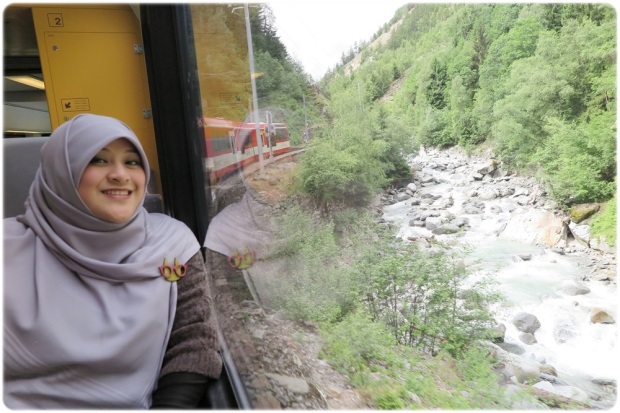 Trust me when I say that we were doing this the entire time. We had to wait for the perfect view and then take it at a perfect timing accompanied by the perfect angle of the face. At times, we were lucky.

Often, we ended up with blurry pics, whitish background, or photos with lamp posts photobombing our pics or pics that make our faces looked fat or ugly.

We took turns to take for each other and I think Bon and me must have taken like a hundred shots before we could finally be satisfied with one. Lol.

Looks like the swiss have really conquered all the mountains and lakes because being able to see the nature side of the country during train rides is simply awesome! 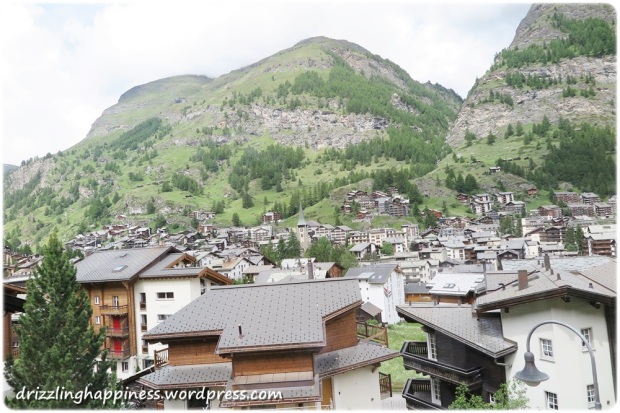 On the way up to Gornegrat, to the same spot we were at, two years ago during winter. Everything looked the same, just without the snow flakes.

That is no longer the problem!

It was cloudy and pretty cold but we were prepared. We spotted the two lakes! It may looked near but it was not! We had to hike down to get closer to the lake.

As you can see, it was not only cloudy,it was foggy too. We could not see the Matterhorn at all because it was hidden among the clouds. 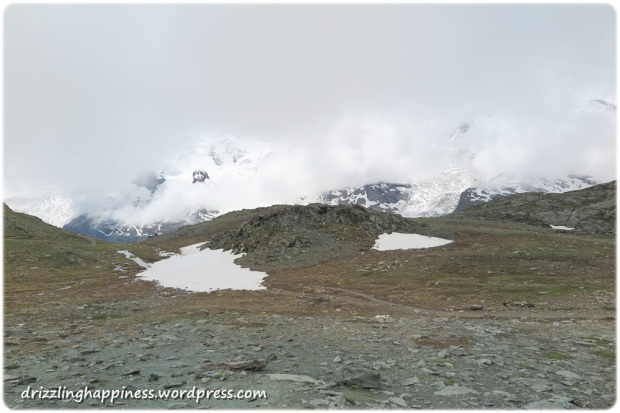 It was beautiful. It would have been more beautiful if we could see Matterhorn and its reflection on the lake.

I was too excited to explore the place but the steep way down was pretty challenging for my injured knees.

The fog comes and goes…..

Therefore, when the wind temporarily blew it away, we had to hurry and take all the photos we wanted. Lol. It was like playing hide and seek with the fog.

I am so glad I am back here within 2 years with the same 3 people I was here with!

Especially these two ladies who made it happened. I never imagined I would be able to witness this same phenomenal place in two different seasons. 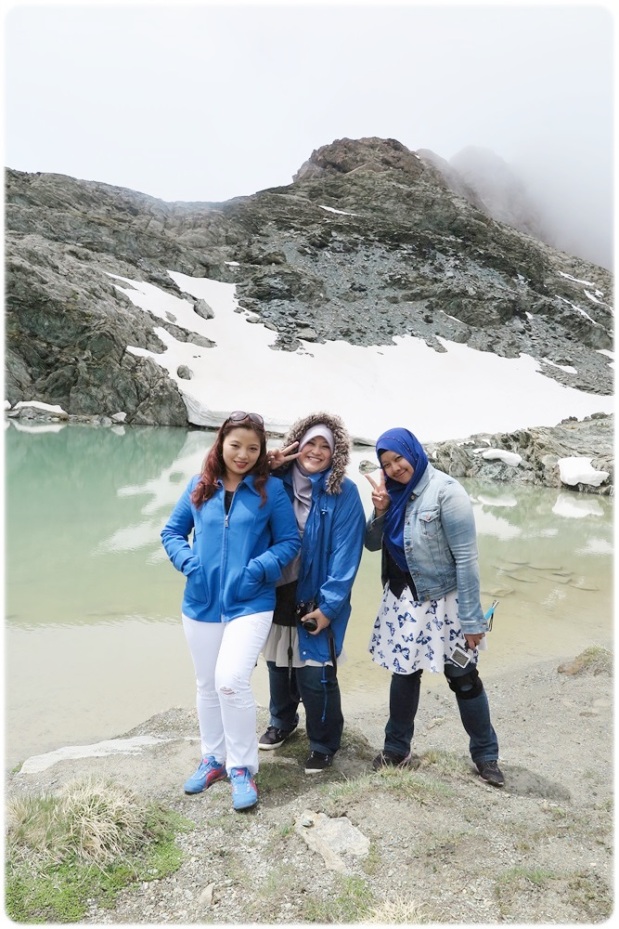 It was getting colder and colder so we had to make our way up to the tram station. There were hikers who walked from Gornegrat and some who were walking up too so we did not feel too alone. This place was more crowded during winter as it was a popular spot for skiing. 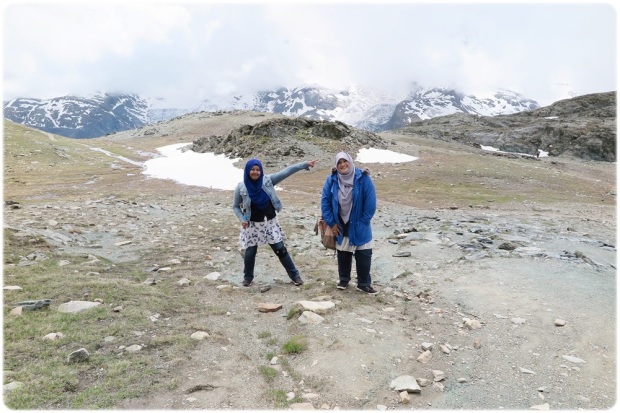 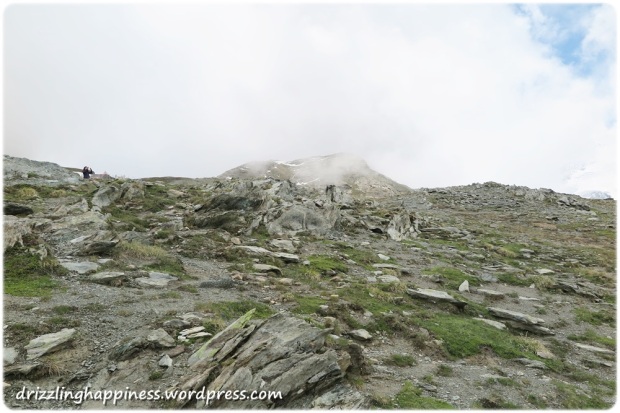 Actually these photos did not do the place justice at all! I was too intrigued with the place and the fact that I was there to witness and experience everything.If you are ever in Switzerland, you have to come here!

For a moment, AK took my camera and took this photo. I shall name this photo of his shoe, the best photo taken for the day. Lol. 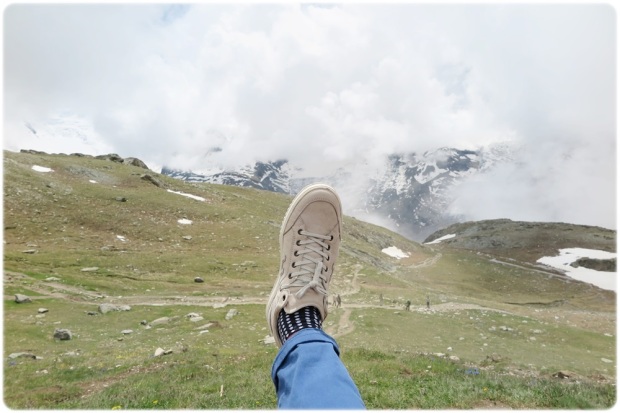 Waiting for the tram while admiring the beautiful blue sky…it really feels like we were walking among the clouds just now. 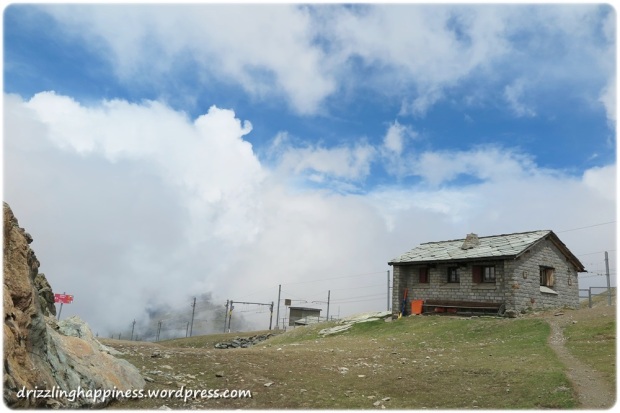 We were disappointed when we were unable to view Matterhorn which is why luck plays a huge role when we travel. We were still kinda hoping that the fog will be blown away so we can view the Matterhorn from Gornegrat.

Unfortunately, luck was not on our side.

It was still as foggy, thus the sad faces.

Oh well, hopefully we will be able to come back here again and view both the Matterhorn AND the lake next time. The fog really loves us, followed us when we were in Venice and now here.

3 thoughts on “Beyond Beautiful Switzerland Chapter 6: Playing hide and seek at Rotenboden”