Here I am typing the last entry on Vienna. I did not realized I wrote 6 chapters on Vienna alone. I guess we did visit quite a number of places. Thanks Bon for planning and the bestie for navigating the way.

As much as I thought Prague was pretty and quaint, Vienna’s beauty lies in the warmness of the people. We had pleasant encounters with those serving us and that include strangers.

Some of you asked me how did I take such nice photos of everything? Firstly, get a good camera. Secondly, look out for picturesque spots, it does not have to have any significance or be a famous spot, you, capturing the photo, put the meaning into the photos. It may not be all pretty, it may have triggered your curiosity and thoughts. Capture it. It will look pretty if it was pretty in your eyes. I always feel that the photo can only look as pretty as how the one capturing it view it. When I capture photos of places and people, it was because they captured my attention and taking a photo of it feels like I am freezing that moment. 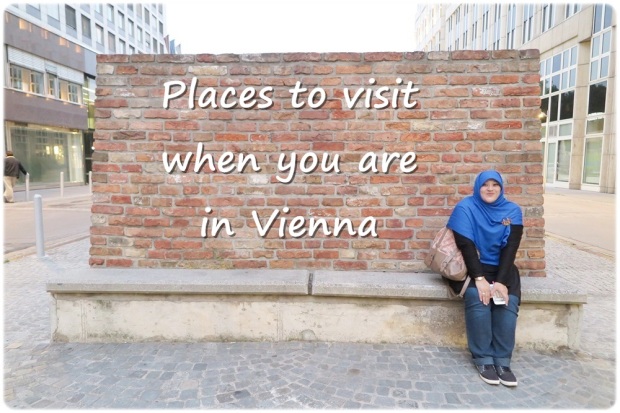 Vienna’s best-known market has around 120 market stands and restaurants for a colorful culinary offering ranging from Viennese to Indian, from Vietnamese to Italian. 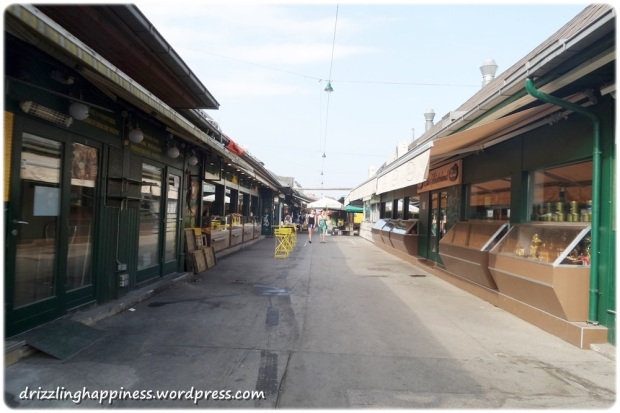 Colourful fruits, vegetables and a variety of delicacies can be found here. 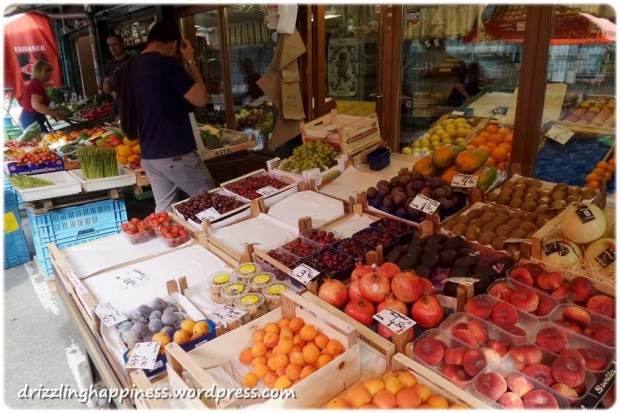 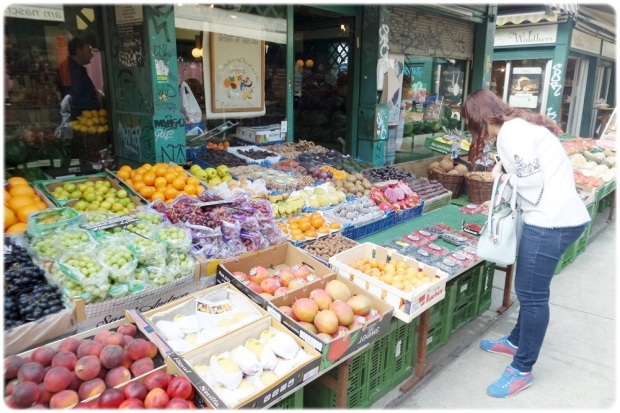 There were so many different types of delicacies here and the stall hawkers were all friendly and noisy. Lol.

I know jackfruit but I have never seen one like this. 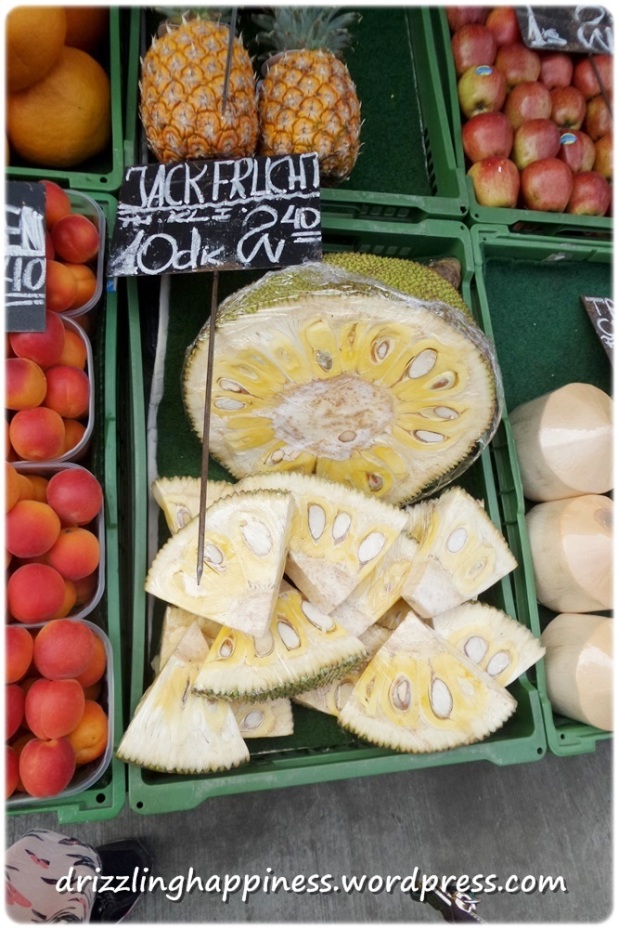 This colourful market is worth seeing, even if you don’t want to buy anything. Particularly pleasant is sitting outdoors on the Naschmarkt in summer, eating, drinking and watching people go about their business.

Yes, and some of the little restaurants were honest about not having wifi.

The Hundertwasser Village was built both on the inside and the exterior by concepts of artist Friedensreich Hundertwasser during the years 1990 and 1991. The building was used as car tyre factory before that time. The flood of people visiting the nearby Hundertwasserhouse led to the idea of constructing a house giving the infrastructure for the visitors. Source here. 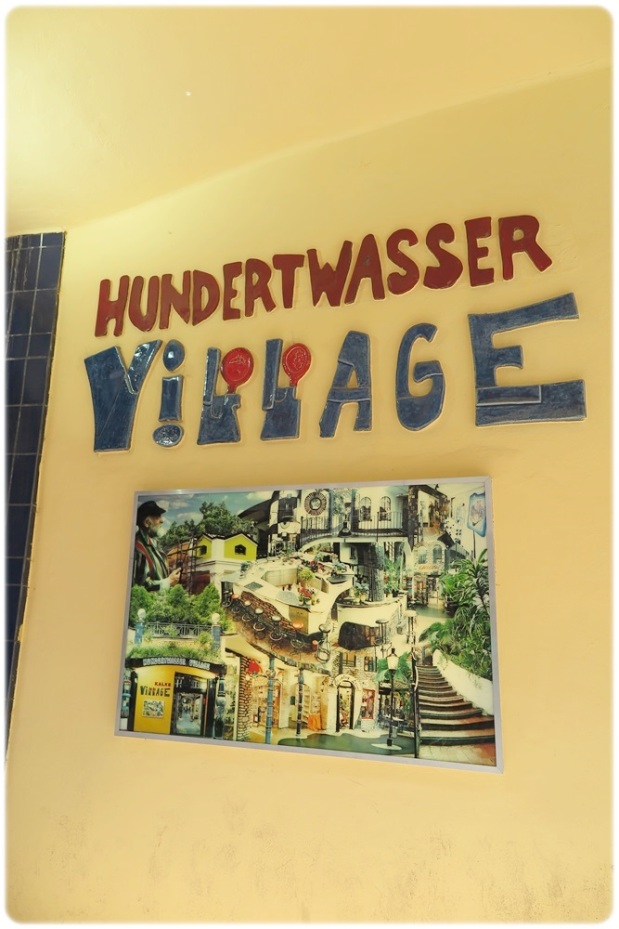 We walked quite a distance but we did not seem to find the village. Along the way, we passed by these colourful buildings. 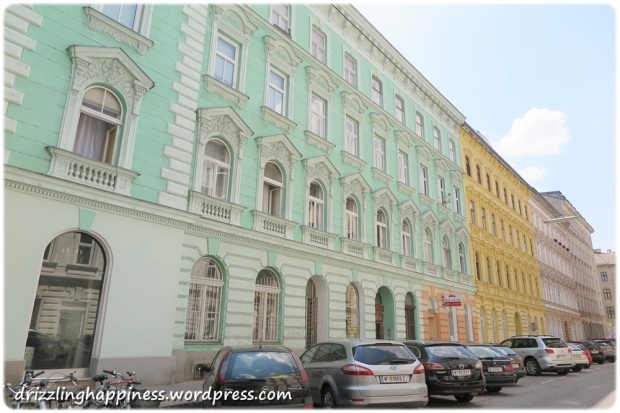 When we finally arrived, we were too tired to go explore. Lol, the irony.

It is actually a residential area so we were not allowed to go in.

The are cafes around the area for you to sit and rest and the building opposite this, is a small shopping mall. You can shop for souvenirs there.

St. Stephen’s Cathedral (more commonly known by its German title Stephansdom) is the mother church of the Roman Catholic Archdiocese of Vienna.

As you can see from the crowd, this is one the most popular tourist spots in Vienna. The cathedral was tall and we were trying our best to take wefie with it.

Stephen’s Cathedral has borne witness to many important events in Habsburg and Austrian history and has, with its multi-coloured tile roof, become one of the city’s most recognizable symbols.

I guess another reason why the area was bustling with people was because it was also a shopping district.

A fountain in the area. I wish there is a story behind the statues. Maybe there is, but there were no details about it that I can read.

Wolfgang Amadeus Mozart is definitely one of the best known names connected with Vienna and Austria. It is therefore not a surprise that you can see Mozart’s statue in Vienna city centre. This monument of Mozart is situated inside the Burggarten (Imperial Palace Gardens).

While we were there we were approached by this guy in costume who was promoting a classical concert which was happening at night. We would love to go even though we have no interest in classical music but the ticket was pricey. He was nice enough to pose for a picture with us even though we were not going to buy the tickets. Lol.

Looks like they go all the way out to promote a concert.

We were lucky because we were staying in Marriot and right in front of it was, Stadtpark. 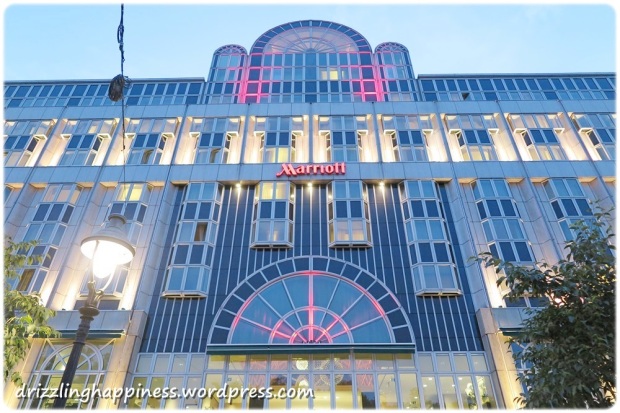 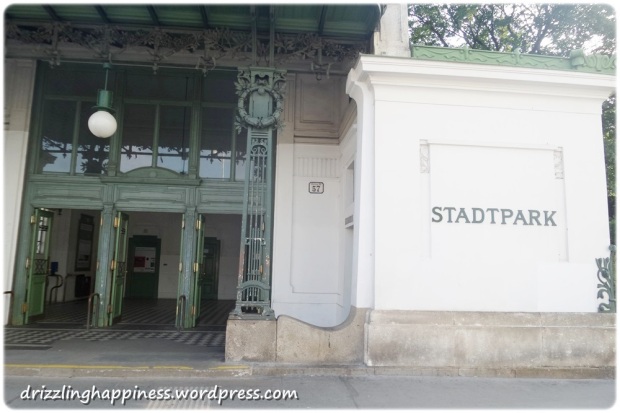 I love quiet parks where people can simply sit and chill. 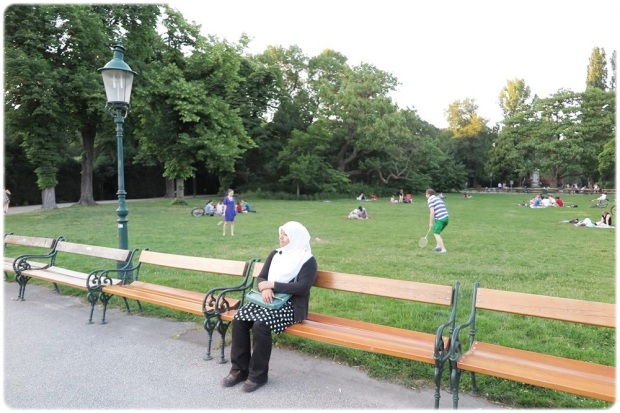 It was not really a big park so it did not take long to explore it. 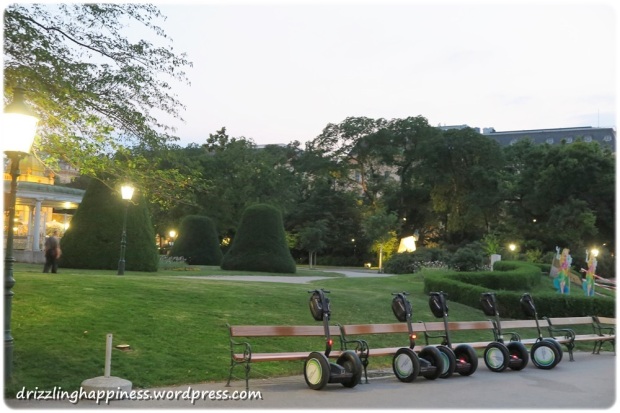 A statue of Johann Strauss in the park. 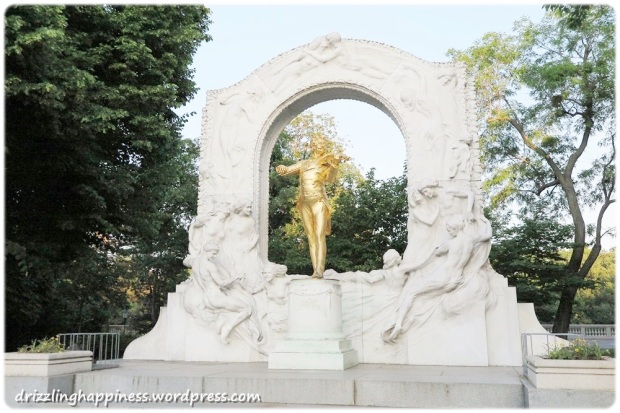 After walking past it a few times, we decided to include ourselves into a photo with him.

I will definitely miss walking in this park when we leave Vienna.

Overall, Vienna was full of picturesque places. It would be hard to choose any one in particular. Even the non-tourists places were beautiful. 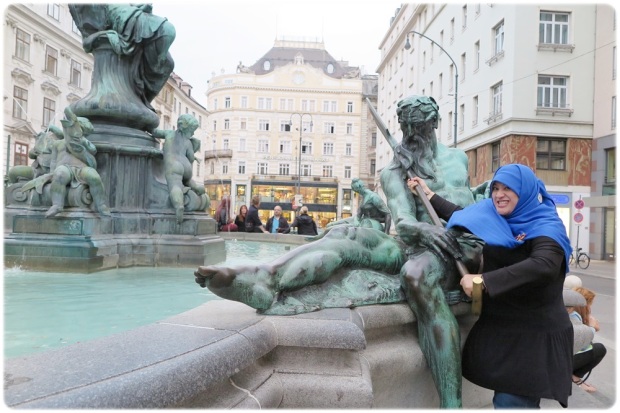 “You don’t make a photograph just with a camera. You bring to the act of photography all the pictures you have seen, the books you have read, the music you have heard, the people you have loved.”
― Ansel Adams

For instance, I caught this pigeon drinking water from the fountain. I was feeling blessed that I was able to notice and witness something so regular, yet heartwarming. 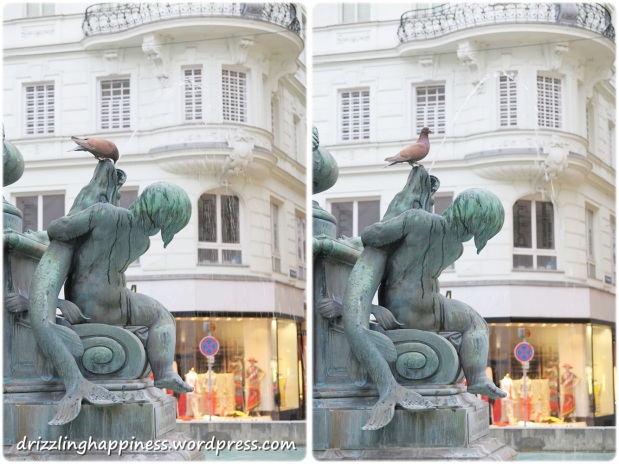 Sometimes I turn a photo funny because, what is life without a little humour?

Everything can be special, depending on the way you look at it.

I felt that the buildings radiate power. The statues, the sizes that were integrated into the building were a representation of the various powerful people. 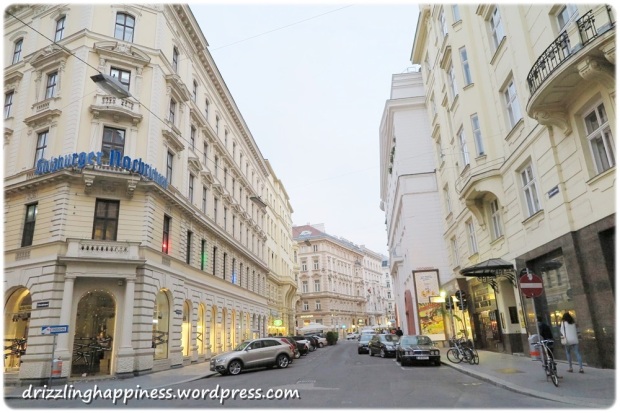 It was a joy to simply walk in the evening exploring the streets. 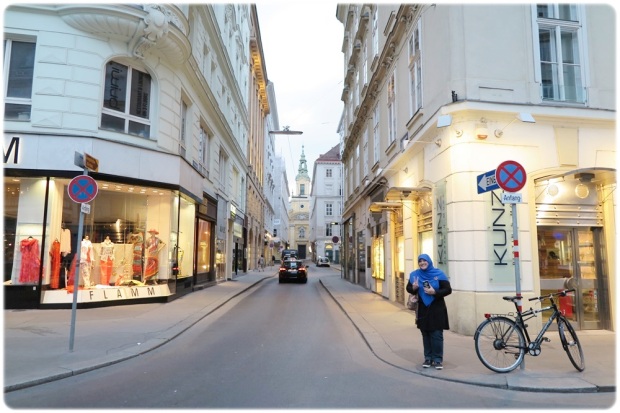 Little cafes inviting us to sit in can be found almost anywhere. You will never go hungry in Vienna. 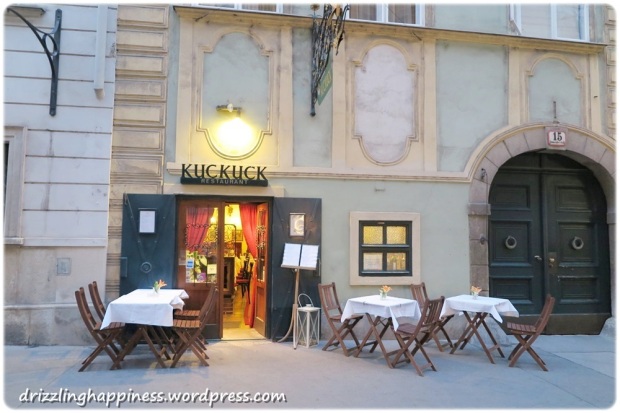 At the end of the day, I realized that sometimes forget that we were tired or hungry because our brains were continuously exploring and learning about the city. Our eyes were like radars, looking out for interesting designs, statues or anything unique that cannot be found in our country. 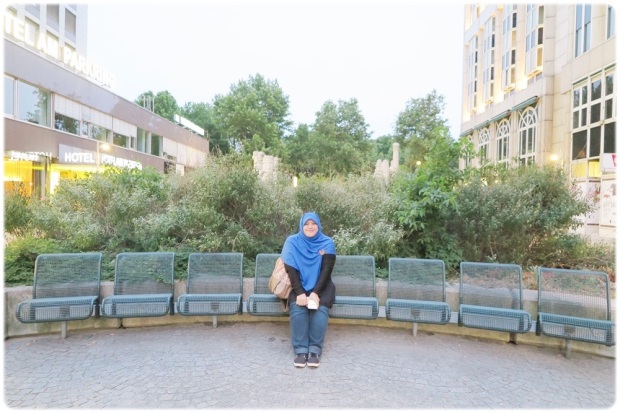 Thus, even a simple picture of the bestie sitting in the middle of a row of seats, with leafy bushes as backdrop, was beautiful to me.

Isn’t that what travel is all about?