Going back in time @ And Why cafe

How often is it I get to escape from work early to have a nice lunch with a friend? Almost never. That was why when this opportunity rises, I had to grab it.

I was free on Tuesday afternoon so I texted Fay jie to ask if she was free and she was! Yay! We have been trying to meet for a decent meal since February but our schedules simply did not match.

We decided to meet in Bugis and I chose this new cafe called ‘And why’.

The minute your enter the cafe, you would feel like you just transported back in time. The interior, design and theme of the cafe was unique. Unfortunately I was so distracted with chatting with Fay jie that I completely forgot to take any photos of the cafe. Lol.

We took some time to read and order because there was nothing familiar in the menu. It is a good thing I guess, the people behind this cafe has chosen to take a risk and dared to be different.

Fay jie finally decided to order the Lobster Mobster. It was sooo delicious.

I cannot remember the exact name of my dish but it is along the lines of ‘cheese steak sandwich’. I am not really a fan of beef but I decided to try something different this time!

I did not regret it at all. The steak was tender and well marinated enough so it was really tasty. I was actually having a hard time trying to eat in elegance. #goodbyeimage 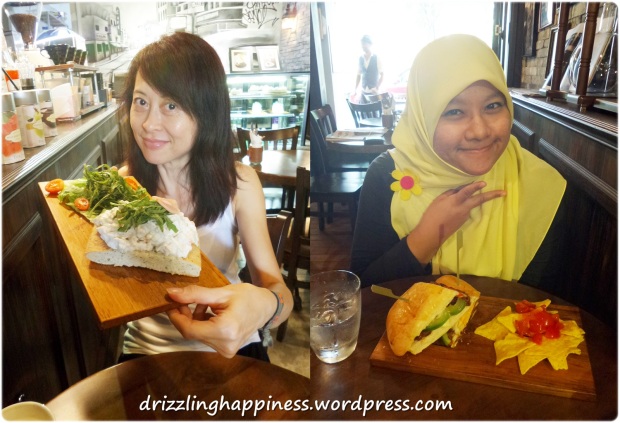 There aren’t many people that you can just ‘click’ with, and when you find those people, don’t let them go.

Thank you Fay jie for the lovely company! She even gave me a treat because she claimed this was a belated birthday treat that was way overdue. Lol. My birthday was in February.

I really appreciate the time spent. Come to think of it, Fay jie and me have nothing in common except for our love in doing workouts especially kickboxing. Our age, our personalities, our likes and even our taste in music and clothes, nothing was in common yet we get along just fine. This thing called friendship is so weird. In fact, when I first knew her, I was quite wary of her because she was so loud. Lol. Fast forward a few years later and here we are having lunch at the same table.

Anyway, Fay jie is one of the people who is never afraid to stand up for what is right. She always treats me like a younger sister and I remembered clearly how she really took care of me when I was attending her ES class, knowing that I was doing workout with an injured knee.

Thank you for all the love and care! Muacks!

We were so lost in our conversations that we lost track of time. One of the waiter (is that what he is called?) boy offered to help us take a photo of ourselves. After he was done, he continues ‘shooting’ us so we continued to pose. Lol.

The service here was excellent. He kept checking if our food was ok. At one time, Fay jie was trying to give the waiter boys a hard time when she insisted on having warm food. Hahaha…….it was so funny, I hope the boys did not take offence.

I also like how the boys took effort to dress in smart shirts, vest and tie. It made them looked really professional and their friendliness most certainly won me over. Girls, you know what to do.

We did not order the dessert so that is a good reason for me to come back!

Thank you Fay Jie!! I will miss her in KB these few months.