After having a wonderful time with the fishes for about an hour, our guide suggested we made a move. He explained that there are so many interesting things we can see only in Tioman Island and he was willing to bring us around. I mean, he is a local so we trusted him. Furthermore, the package we bought comprises of only had 4 destinations but this driver was bringing us all over the island. Lol.

This bird is the symbol of Tioman Island.

Did I mention that I am still in love with this view? 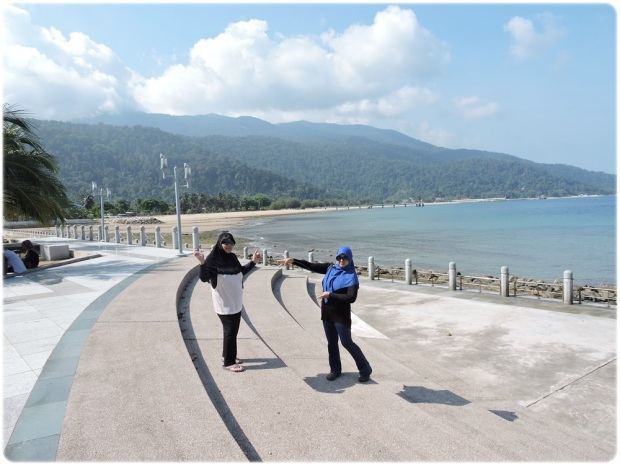 We were eagerly waiting to arrive at the next destination when our guide suddenly stopped his jeep right in the middle of road. He requested us to alight from the vehicle and look up.

This was what we saw. At first I thought it was some fruits. 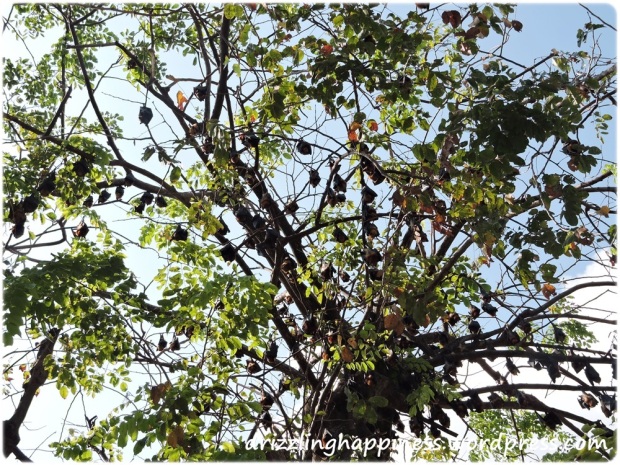 Looking closer, we realized that they were bats!

This was highly unusual because usually bats can be found sleeping in caves where its dark. These bats were sleeping in bright daylight! Wow.

We were on the way up to Juara Village. The village was situated on the hills and on our way up we spotted some tourist hiking up on foot and on bikes. It was a steep way up, I would have taken the whole day to reach the top if I had gone on foot.

He stopped his jeep right here and asked us to look at the trees. He did not really tell us what to look at, he only told us to look for anything unusual. He also added that once we spotted it, we would break into a laughter.

Can you see it?

It was a nose-like thingy on this tree.

He was right. We found it so amusing we laughed. Thus, this special pose in honour for this tree.

We took a short break at this cafe by the beach.

I wish we can stay here and chill all day! 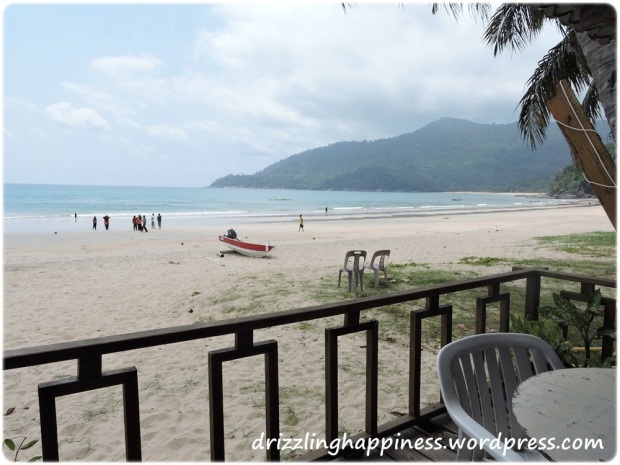 However, being the curious me, I wanted to walk onto this bridge to the very end to explore.

We didn’t because it was crowded. There seemed to be a competition going on because people were cheering loudly. Therefore, this jump shot would have to do. 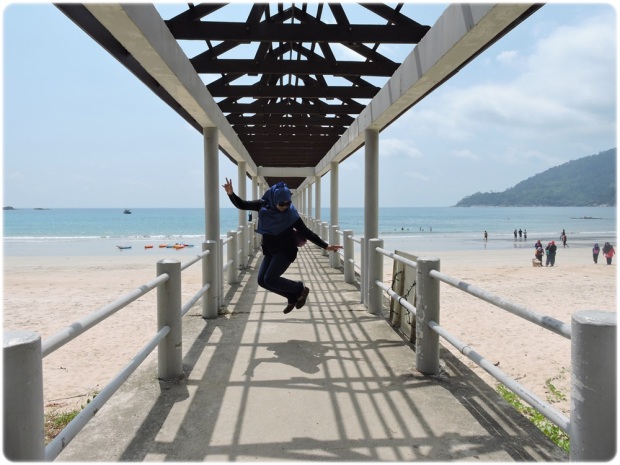 My dad wanted to try to do a jump shot too.

But failed. Lol. In the end he decided to go with this ‘karate kid’ pose. 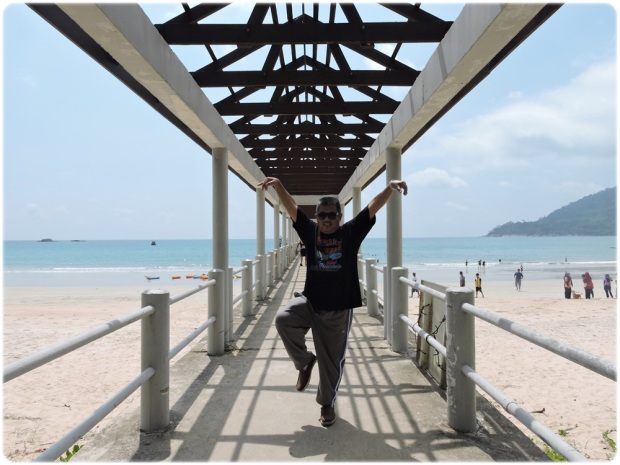 I love how its so breezy by the beach regardless of the time of the day.

We headed to the waterfall next. We were told that it was a 3 minute walk from the side of the road to the waterfall. IT IS NOT A 3 MINUTE WALK. It was more of a 10 minutes of being careful not to fall kinda walk.

We are going into the jungle.

The walkway was not exactly defined due to the rainy season that was just over. My dad was looking confident as he breezily walked in front.

Towards the waterfall, there were no more trails. We had to go down the muddy hill and there was nothing we could hold onto apart from the branches from the tree and one pathetic rope.

It was not easy for me, the one with the 50 year old knee, so can you imagine it was tougher for my mum who did not particularly had strong legs or good stamina.

However, we thought that it would be such a waste to go back to the jeep without experiencing the waterfall so we persisted.

Victory look once we reached!

It was also rocky so we had to be careful and watch our steps.

Actually it was just a tiny waterfall. We were told that there are 3 waterfalls in Tioman Island but we only had time to visit one and this one seemed to be the easiest to get to. However, the centre of the waterfall was deep and we were told by the visitors present not to go there if we cannot swim.

Oh well, there goes my chance. Meanwhile, my father who COULD swim was happily enjoying himself at the waterfall.

Since there was no way I can reach the waterfall without needing to swim, I could only look at him from afar and take his photos. 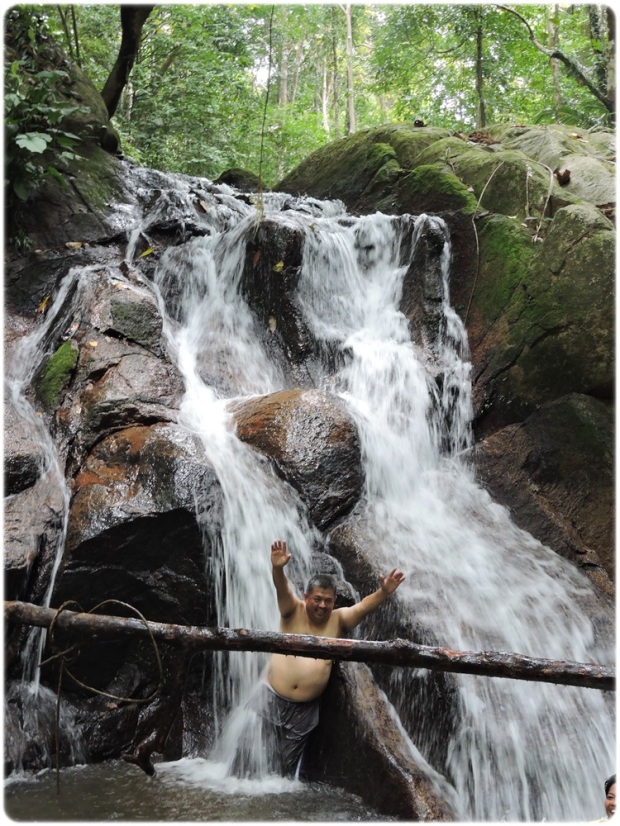 I am kind jealous. The water was extremely cold like ice water.

Mum was resting and sitting on this huge log because she can’t swim too. Lol.

Actually we were resting because it was going to be tough climbing up to the roadside. Hahaha. 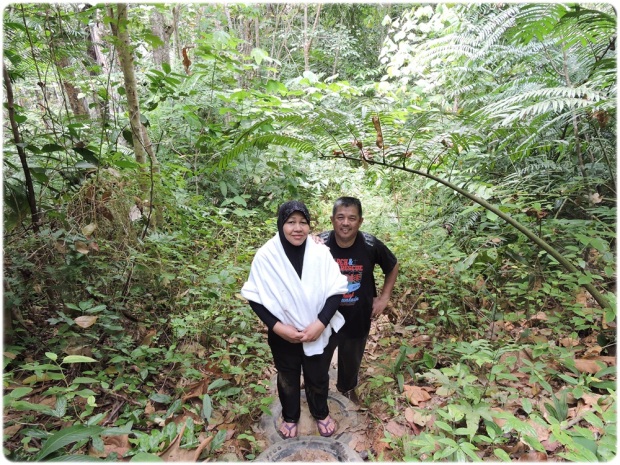 The ‘stairs’ were made of old tyres so you can imagine how slippery and unstable they were. I had to be very careful and not be the usual clumsy me because I was helping Mum and as usual I could not fully bend my injured knee.

We made it! This was an accomplishment!!! Well done!