Leaving footprints, heart and soul in Korea: Making friends and fangirling on Day 10

Before you proceed to read this entry, let me warn you first that this entry will be all about fangirling on Day 10. Yup, the bestie and me spent the entire day frozen while fangirling and even though the cold weather really made us suffered, the whole experience was so worth it.

So a few days ago, we received news that this Lee Hyukjae aka Dancing Machine of Super Junior aka Anchovy aka Lee Donghae’s one and only boyfriend aka the guy who makes all the girls go asdfghjklaadl will be making an appearance at his cafe Chocolat Bon Bon on the 17th of December.

When we heard this, we immediately made the decision to go. We had to. There was no need to even think about it. When we were here the last time, we missed him by a week? We were kinda hoping he would make an appearance in his cafe, back then known as Tous Le Jours. Sadly, he didn’t.

The girls wanted to visit Lotte World today so they went ahead without us. The bestie and me dedicated the whole day just for visiting CBB. Lol.

We have no idea how the number system worked so we wanted to be early just to make sure we do not miss the chance to meet this Lee Hyukjae. Quick breakfast in the morning. I love how we have the freedom to cook and decide on our own breakfast. 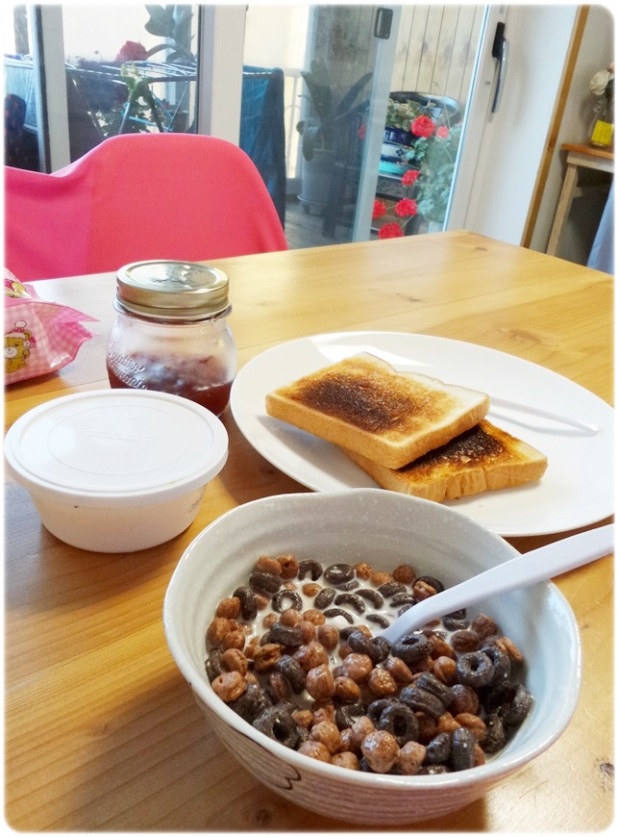 We were being the typical ‘kiasu’ Singaporeans by being really early. We arrived at about 11 am and there don’t seem to be a crowd outside. 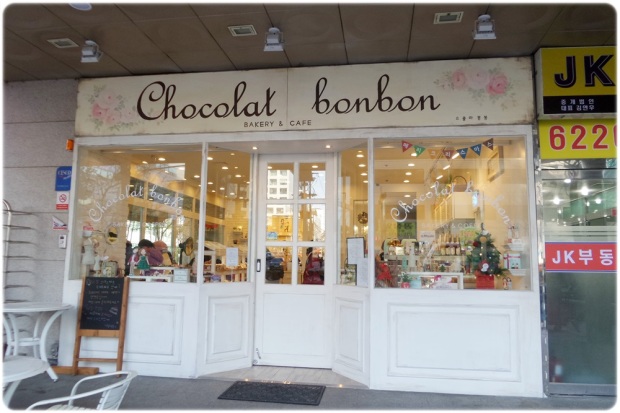 We were warned in advance by fansite masternims that today was predicted to be THE coldest day of winter. The area around the cafe was also well known for being windy. Therefore we were all geared up in 4 layers of clothes and scarves to cover our faces.

The last time I was here was 2 years ago and I was not even a fan! Lol. I was wondering why the bestie made me walked so far in the freezing cold weather to go to this tiny cafe. LOL.

When we arrived, the cafe was full of girls, though it was not full house. Everyone was quietly looking down and talking to each other. It appeared almost like a normal cafe.

He was predicted to appear around 3 pm so what on earth were we going to do for 4 hours? All the cakes were sooo tempting. 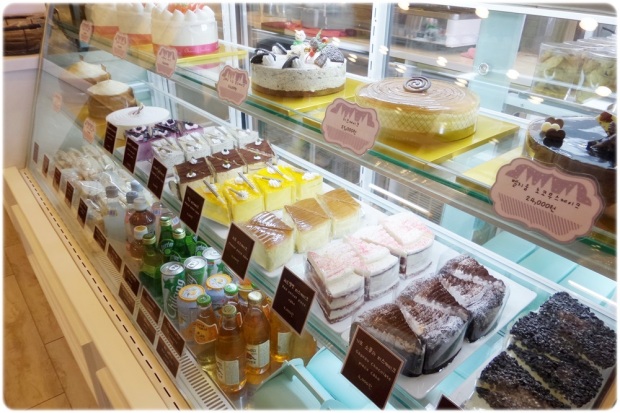 We ordered our drinks and cookies an sat down at the side table with these beautiful fanart of Hyukjae and Choco.

From where we were sitting, we could see all the stools and the ‘reserved’ spaces right outside the glass window. We then knew that the fans would be standing there to take photos. However, the wind was too strong and after a while we saw that Hyuk’s family, his mom, auntie and cousin were trying to put a tent up outside. 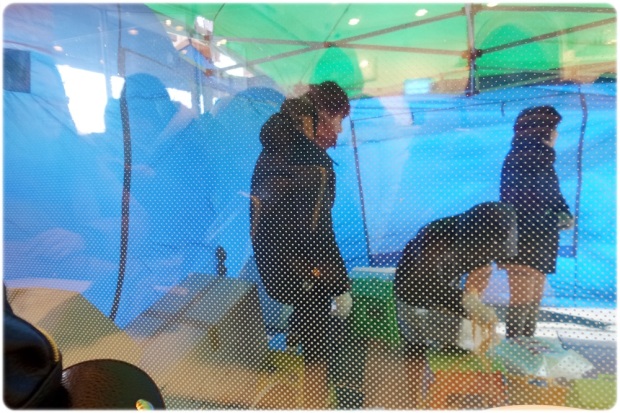 I guess they were trying to block the wind? It was too cold and just watching them trying to put up the tent was so touching. They even attempted to use boxes to hold up the tent. The wind was too strong that they were having a difficult time setting it all up.

While they were trying to set the tent up, we could not help but notice Hyuk’s good looking cousin. Yup, he was so good looking, that the ELFs started to take his photos and he got shy. Lol.

I am just glad to be inside the cafe.

All the brooches and ribbons were too pretty. I love how CBB’s merchandise were all so girly. Its totally my style and I got for myself this pretty ribbon brooch. 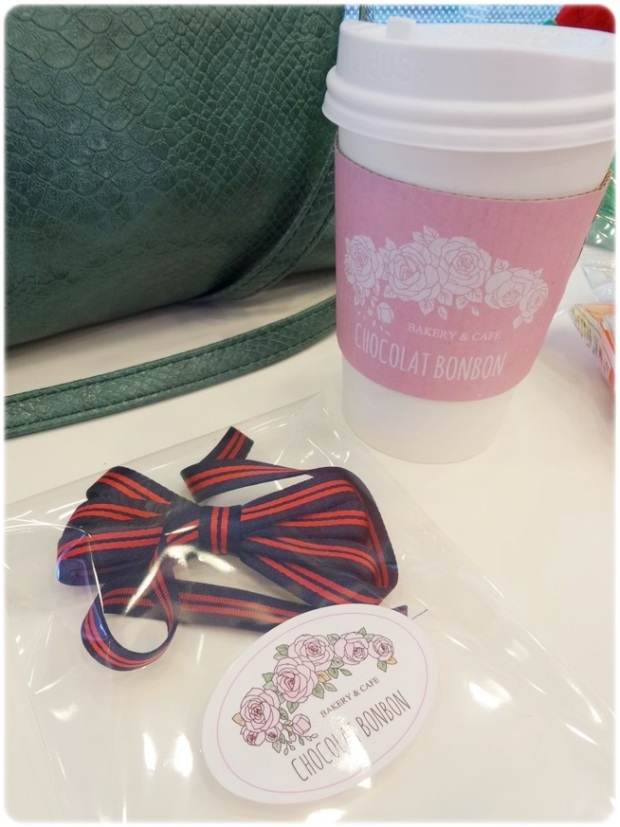 After a while the Mum announced that all of us should move to the lobby because it was getting crowded in the tiny cafe. She did not allow anyone to stand outside because it was too cold and windy. The tent that they were trying to set up was eventually taken down because of the strong wind. Due to that, the mum was insistent that no one should be standing outside to take photos.

At the lobby, we were all organised and lined up according to our numbers. There must have been 300 ELFs there from all over the world. In fact, it seemed that only half the crowd were koreans while the rest were from Japan, China, Asia and even Europe.

He was on time! He arrived at 3 pm and walked passed me (because I was the first in one of the lines) but did not manage to capture anything on my camera because:

1. I am pabo. I should have used the continuous shot mode.
2. My fingers were too cold, I could not feel it and move it fast enough.
3. My brain was also frozen and I could not think.
4.There was no commotion when he arrived and he was wearing his oversized winter jacket while trying to cover half his face (due to the cold wind).

I actually liked how everything was so neat and the ahjusshi managed to get everyone organised despite dealing with so many different nationalities and languages. Lol.

He was all smiles! (Photo credit to owner)

I did not get any good photos ok. I was holding a normal camera, while the rest of the elfs were carrying dslr with various zoom option …hahaha..I can’t even compare. The mum was still insistent that no one should stand outside because it’s too cold and windy and she feared we may fall sick. While trying to catch a glimpse of Hyukjae from outside the cafe, his mum suddenly held my arms and lightly pulled me into the lobby. She was saying something in korean too but I guess she was telling me stay inside. She actually rubbed my arms to generate some heat but of course it did not do much. Lol. So sweet though. 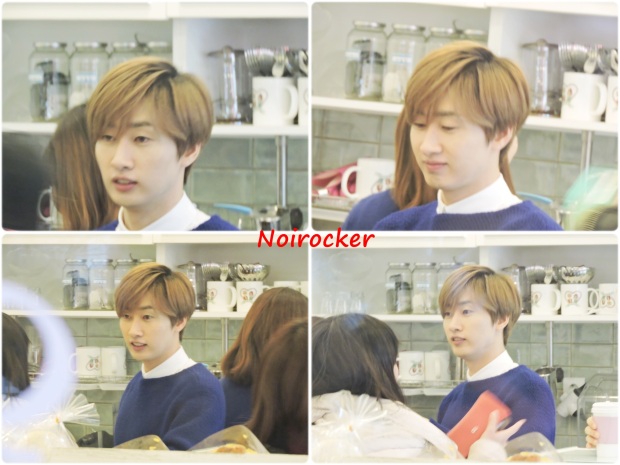 Our number was 50 and 51 so I guess he was not that cold yet when he met us. I was oddly calm. The bestie was more nervous than me. Lol. When it was finally our turn, we introduced ourselves as ELFs from Singapore and he was like “Ah, Singapore yes.” Then the bestie mentioned that they should come to Singapore for Super Show! And he was like “Yes yes”. Lol. I did not really want to talk about Super Show because there were three Singaporean girls before us and they had asked the same thing lol. I told him that he should bring D & E tour to Singapore and Asia and he was like “Ah, I hope so too.” Did he pouted slightly? Yup I think so! So…. I guess we should not be too hopeful about D & E tour in Asia. Sobs.

As he packed all our stuffs into the plastic I could not stop staring at him because he was just so pleasant looking! Who said he is the ugliest member in the group?! He is not ugly at all…..his lips was so red and plump ajkhkjkdsjfhll…. I did not want too stare too much at it. Lol.

Before bidding goodbye, we once again said “Come to Singapore lah.” and he answered “Oklah. Thank you lah.” Lol. Its so cute that he simply add ‘lah’ at the end of all sentences. LOL.

He said ‘Bye lah. Bye lah.” to us once again and I requested for a handshake and he gladly abide. I died. Even though I was not as nervous (like how I was when meeting Jongwoon, my love and bias lol), my hands were still cold because of the weather! The last we heard it was -11 degrees and there was no heater in the lobby. CAN YOU IMAGINE HOW COLD AND FROZEN WE WERE THROUGHOUT THE DAY???

I cannot believe that we actually talked to him and even shook his hands but my hand was so cold and rough due to the weather. Aish. This is not how I imagined it to be hahahaha. 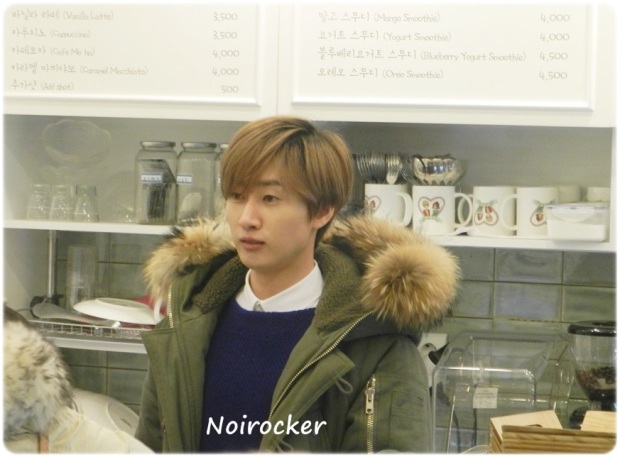 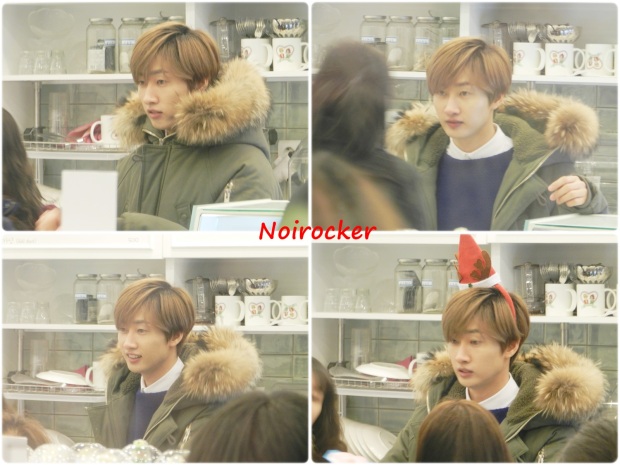 After a while he was seen wearing his winter jacket. Since people kept coming in, the cafe was also slightly cold due to the wind and I guess he was feeling it. Because I am pabo, I also forgot to pass to him the gifts that I had wanted to pass to him and baobei. I bought these at Namdaemun market and decided that I did not want to come empty handed.

I managed to pass it to his mum after that and she immediately passed to him. Before we went out of the cafe, we wanted a photo with his mum. We were not allowed to take photos in the cafe except for this reason. I took for the bestie first.

I saw Hyukjae at the back and included him in this photo! I am smart or what!

I had my turn too but of course I had to stupidly close my eyes. BOOO. 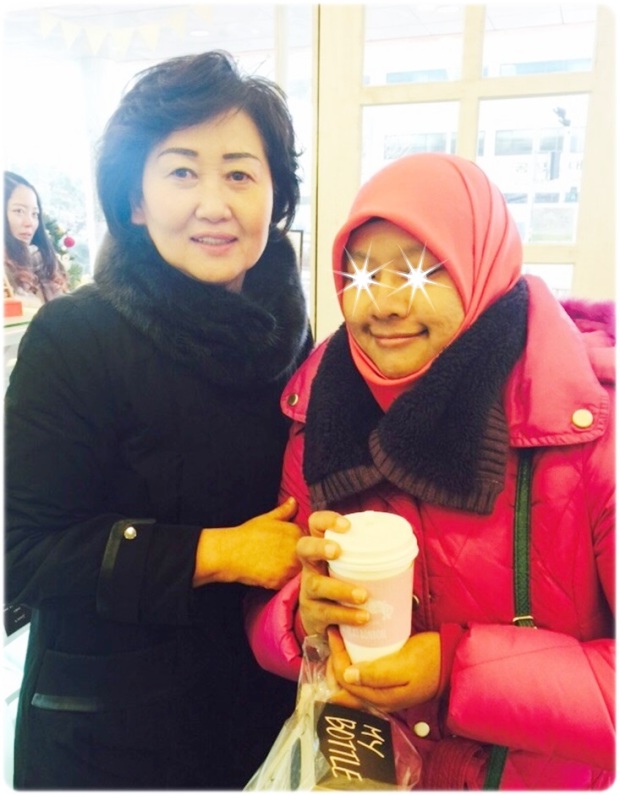 This is why I am the one taking photos for our trips. :p

Anyway we actually wanted to see him go off but the queue seemed endless. We were blessed because we met some ELFs from Malaysia and started talking to them. They were really friendly and we literally froze together there the entire day. Lol. 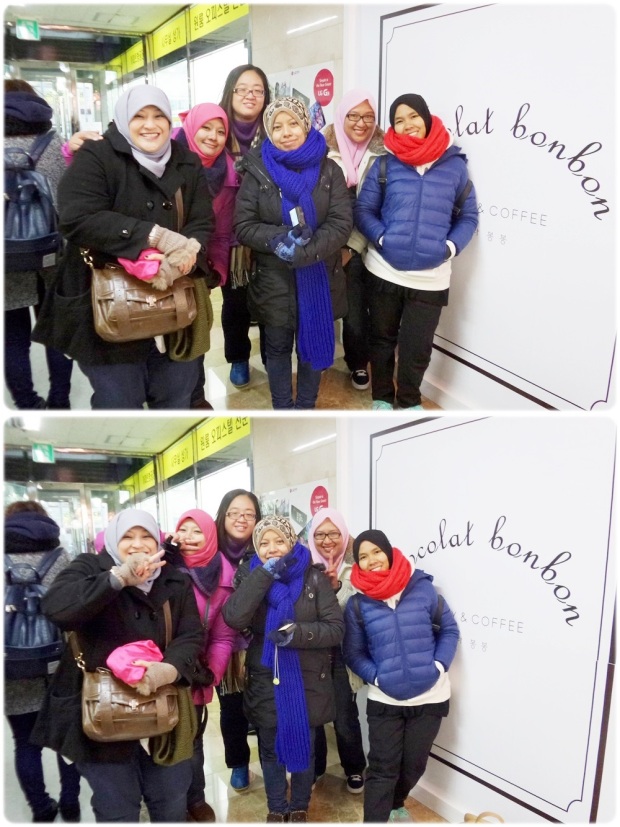 We also met ELF from Sweden and even she could not stand the cold. She was actually the last few in the crowd. Her number was 350! It was almost 7 pm when it was her turn.

By this time we were all hungry and cold and many people started to leave too. I have never been so frozen my entire life but I think its also partly because we did not have a proper lunch.

He left his cafe at 8 pm to have his dinner at nearby restaurant. He finally left the building at about 9 pm. He spent half the day there. Wow….he must be tired of standing for so long and shaking everyone’s hands. How nice!!! The mum was also kept apologizing to us, because it was really soooo cold. They wanted to buy all of us heat packs but the shops were out of stock. Wow sooo nice and considerate. 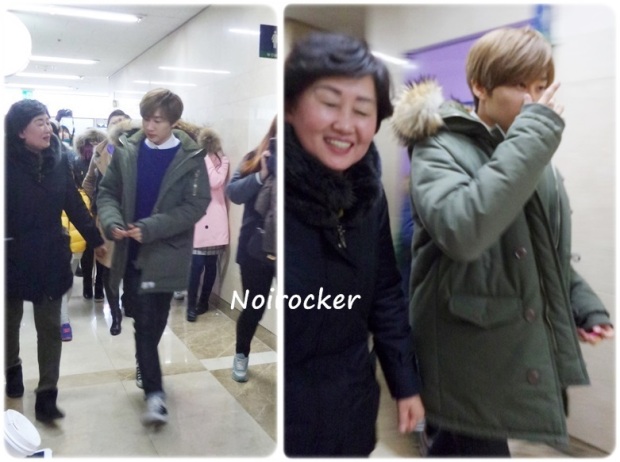 This fangirl experience has been exciting and exhausting hahaha. I don’t think I can do this too many times. Ah yes, I am old but how often do we get this chance of meeting a member of our favourite band right? Now, I am an even bigger noona fan. 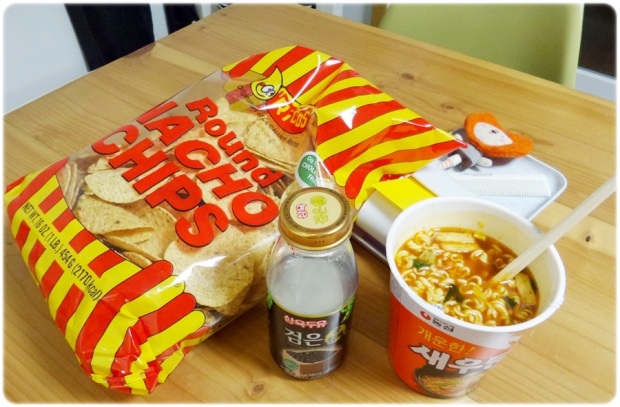 Therefore it was worth it.

We were so hungry and almost all the restaurants were closed or closing so we settled for this.

Instant noodles. I was too hungry and cold and could not feel my nose, my fingers and my feet so can you imagine how fast I was walking back from Hongdae to our apartment? Lol.

6 thoughts on “Leaving footprints, heart and soul in Korea: Making friends and fangirling on Day 10”