After what it seemed like a really long ride, we finally arrived at Incheon Airport.

While we were exhausted after the long flight, Effa had to deal with her luggage being smashed. Gosh…..not cool ok. 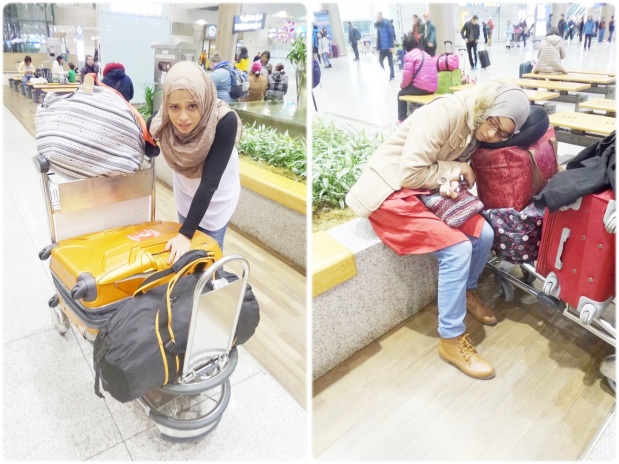 So while waiting for bestie and Effa to get everything settled, we got ourselves ready and properly attired. 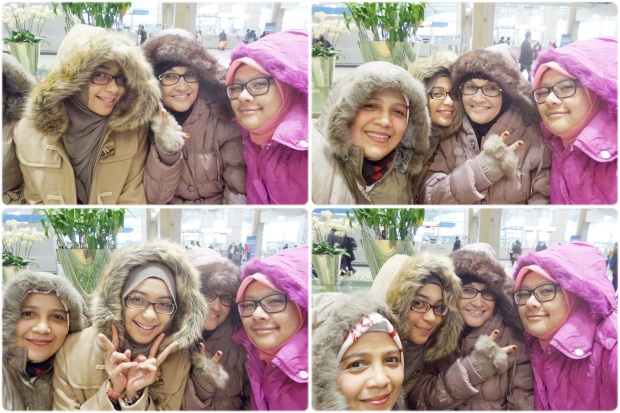 Once all was settled, we took a bus to our guesthouse. I am always thankful for the easy bus transport system in Seoul.

Our guest house was really small and I thought our huge luggages took up half the apartment. Lol. This was my ‘bed’. It was on the tiny level up and since the ceiling was so low I had to be careful not to knock my head onto it.

Naqiyah (who was really tall!) took the other side. I worry more for her hitting her head lol. 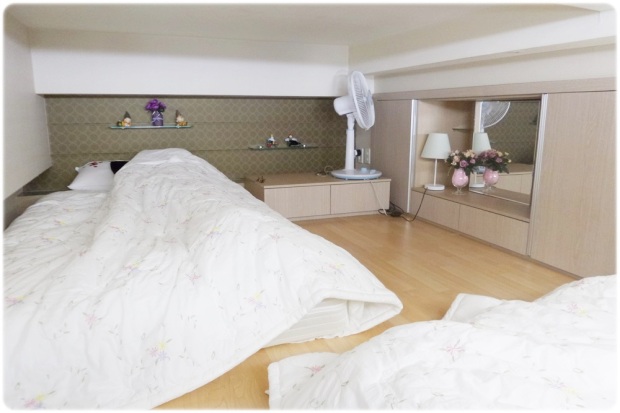 We got ready to go out to look for food and guess how excited the bestie and me got when we saw maknae’s poster in the subway station. #auntiefans 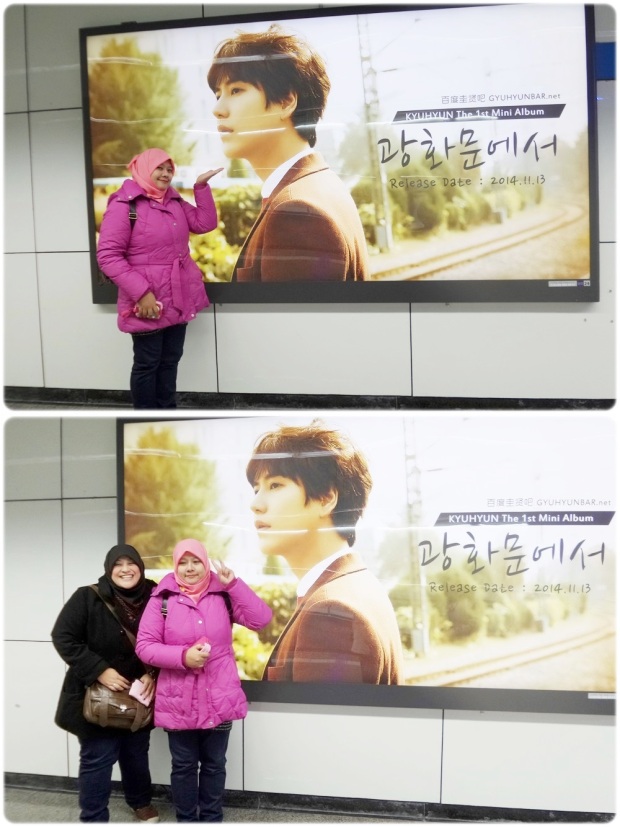 We are not really Kyu bias but these kind of poster is something we cannot find in our own country. Lol.

We are here at Gwanghamun Square!

Oddly, we have never been here. We have past by it in cabs in our previous trips but we have never actually stepped into the square. Lol. 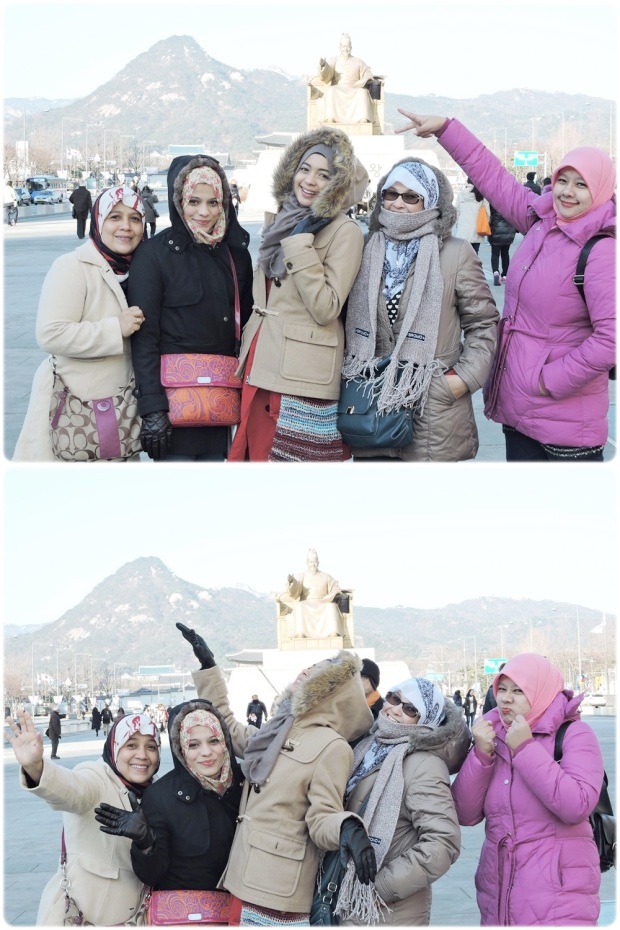 There seemed to be a lot of tourists taking photos……

and so we did too. Look at how we did not include the monument in our wefie. Lol.

Apart from appreciating the history, there was not much there so we decided to make our way to the stream instead.

We are here at Cheonggyecheon stream! 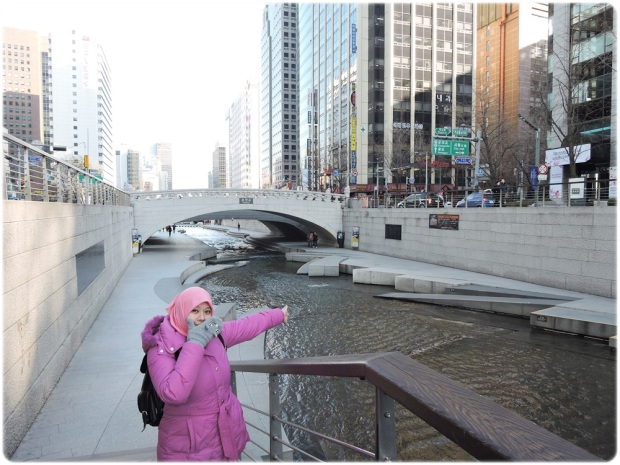 Its so beautiful. I remember the bestie and me attempted to walk along the stream in our first winter here but it was freezing cold so we gave up after 15 minutes. We wanted to try again when we were here in summer but it was too hot!

Its still cold now but it was not as cold as the first time.

The stream is actually a nice place to play…..

Be careful not to fall into the stream though.

Oh well, if you have someone to hold onto, I guess its not so dangerous. 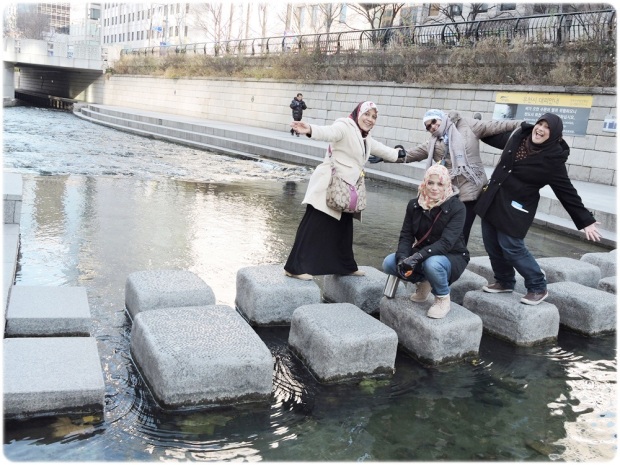 Its also a nice place for taking solo shots.

Its the best place for taking selfies…..and get photobombed. Lol. 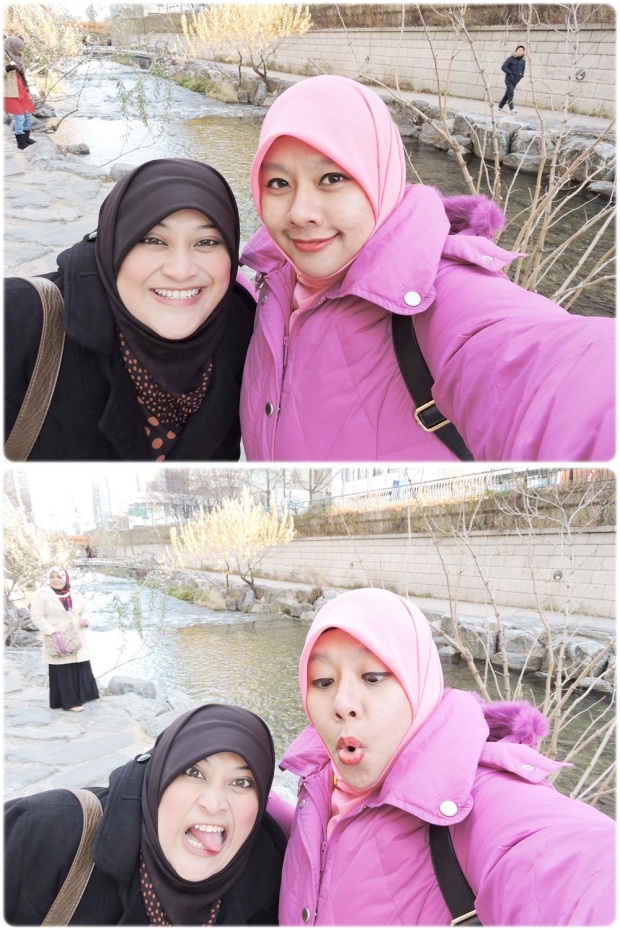 I love how the dried branches reach out into the stream. 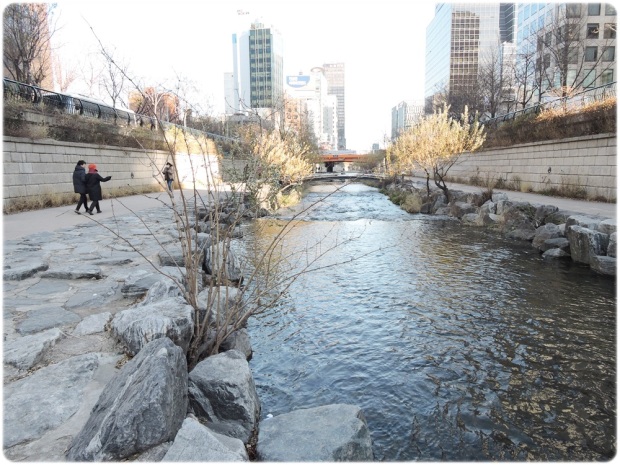 Ok I have a thing for dried branches in cold weather.

Whoever came up with the idea to have the square rocks was brilliant. It allow visitors to cross the stream easily. Building a bridge would have been a bigger hassle.

Since the water was still running instead of being frozen, I am guessing it was not THAT cold lol.

It was a pleasant walk back too. I was prepared with gloves and heat packs this time.

It was time to head to the subway station to get to Itaewon. Mandatory shot in front of the mirror with all our faces covered up thanks to the wind.

First time here during sunset and I am simply awed by the wonderful mix of colours in the sky.

We met a group of Singaporeans here! What a lovely coincidence. We can always tell Singaporeans apart from other nationalities because we are the only country that speaks Singlish lol.

They helped us take this group photo and yes, all six of us are in this picture! 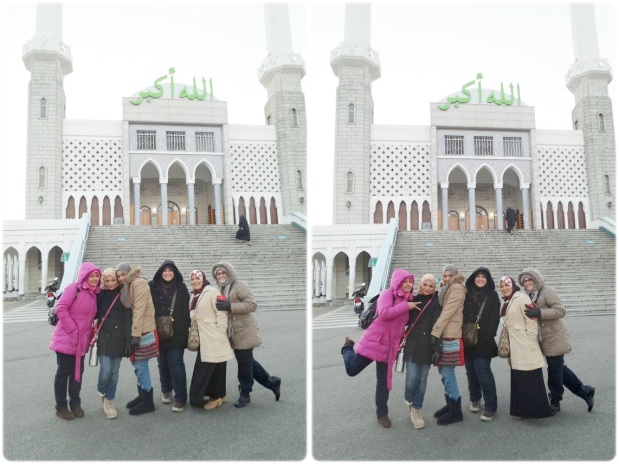 We walked down the hill to look for a suitable place of dinner. The best thing about being in Itaewon is there are countless halal restaurants around. We finally decided to try this halal korean restaurant.

Looks appetizing, mainly because we are all hungry after the climb up to the mosque. I was so hungry I could eat a cow.

The hot chocolate was really good, its perfect in this freezing cold weather.

The group decided to walk around Itaewon to shop while I decided to catch up with an old friend.

It has been a pretty tiring day. Before heading back, we stopped by this little cafe in the subway station near our guest house.

Guess what, we had room for dessert! 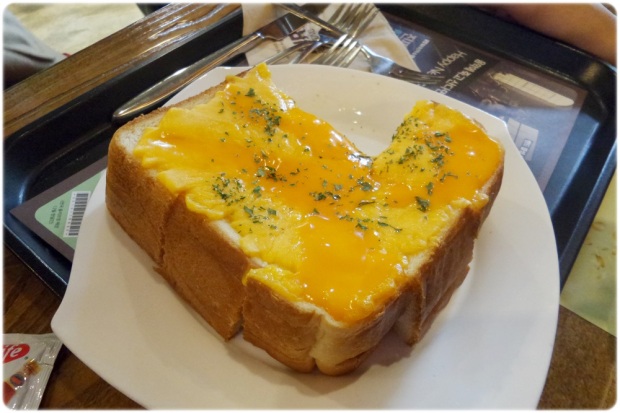 I guess the cold weather is making us hungry?