I was approached by my RO and asked if I could assist them by tagging along with them to Batam for CIP for the boys, I agreed instantly. Oddly, this is the first time I have been approached. Le partner at work has been there before and I find it odd that no has approached me before.

I have always wanted to do community service like this and now that this opportunity was presented to me, I had to say yes.

I was scheduled to leave on Wednesday with 2 classes. I was slightly worried because I barely know the boys, except for one or two but my colleague assured me and welcomed my presence warmly. I have been to Batam many times for a short vacation but for this trip, I had no idea what to expect. 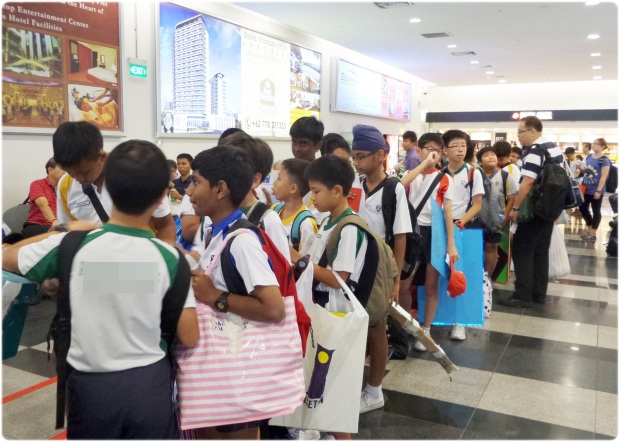 After an hour, we have finally arrived. The calm seas managed to calm us too.

Funny story. I was with CH’s class and so I was the last to alight from the bus. While walking into the school and looking at the excited faces of the students in the school, I was infected by their excitement too. I was also glad that my RO was in charge there.

I was the standing at the end of the line and out of the blue, a guy (I assumed he was a staff of the school) approached me and asked if I could understand malay.

Well, of course I said yes. He then went on to inform me that the principal would like a quick word with me. Assuming that it was just a polite call, I agreed but since the boys who were previously in front of me were long gone, I decided to just go ahead into the principal’s office. I made a mental note to join the group back once I am done. I mean, what is the worse thing that can happen right?

The principal’s office was really small and its not even air conditioned. There were stacks of papers everywhere. The principal, a 60 year old lady was very warm and friendly. In fact I did not feel like I was talking to a principal because she was so motherly. She started to ask how it was like teaching in a school in Singapore, how long I have been teaching, what subject I teach etc.

The conversation was quite ok until she started to ask if I was married. From then on it just felt like I was on an interview for daughter in law. Lol. I was quick enough to mention that I already had someone in Singapore (in case she wants to matchmake me to anyone here omg). After about 20 minutes she was still happily talking away and I was getting worried because I was not sure if my colleagues were aware where I was.

I politely asked to be excused so I can join the boys back and she let me go. I don’t think she intentionally wanted to keep me for so long but perhaps she enjoyed talking to someone from overseas. Lol.

When I rejoined the boys, I saw the relief on all my colleaguess’ faces. Apparently, they were in total panic when they could not find me anywhere. They were worried I was kidnapped? Wow. I felt really bad. I had no idea that none of the staffs here informed them where I was.

When I entered the classrooms, the atmosphere was chaotic because the students from other classes came around and wanted to take a look at what was going on. It was pretty hard to control the crowd.

After rearranging the tables, the boys did a short presentation on our school and our country as a introduction. They were reading the script in bahasa indonesia even though they were not malay speaking. Wow impressive!

After some instructions (Yes I gave my instructions in malay to the best of my ability ok!), the students sat neatly outside the class. I made them promise to stay quiet and remain in an orderly manner so that we can reward them accordingly later. Surprisingly, they understood my instructions. Lol. 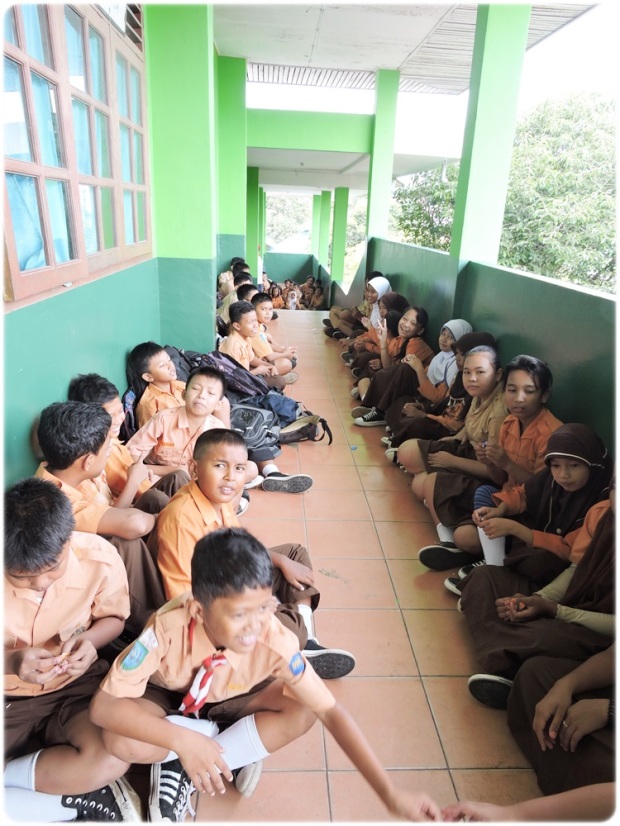 The students were so excited to play the games! It was interesting see how the two groups of students interact despite the language barrier. I did my best to help them all translate but some things were self explanatory. 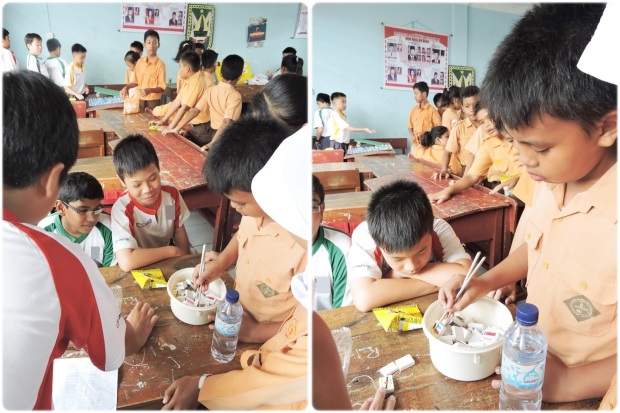 I was also relieved that I was able to depend on some of the bigger boys for help. This boy for instance, was doing crowd control and was giving out clear instructions in malay. His malay was so impressive, I was too embarrassed to let him hear any of my malay instructions. Lol.

Good job to the malay teachers in the school! 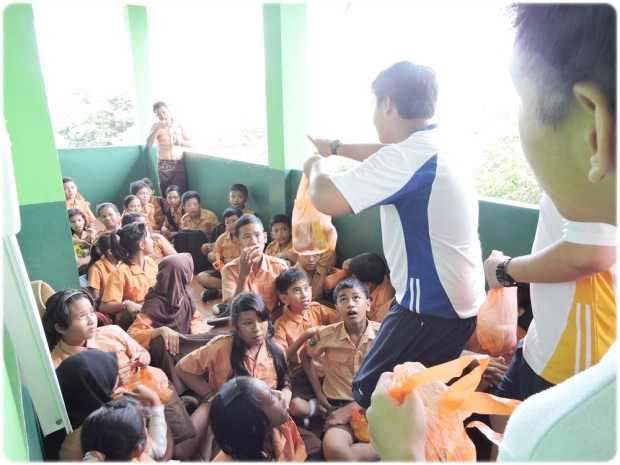 While all the happenings were going on, look who were curious?

Some simply wanted to be photographed.

It was the same at the other side too.

Looks like more students wanted to be photographed so I simply granted their wish. 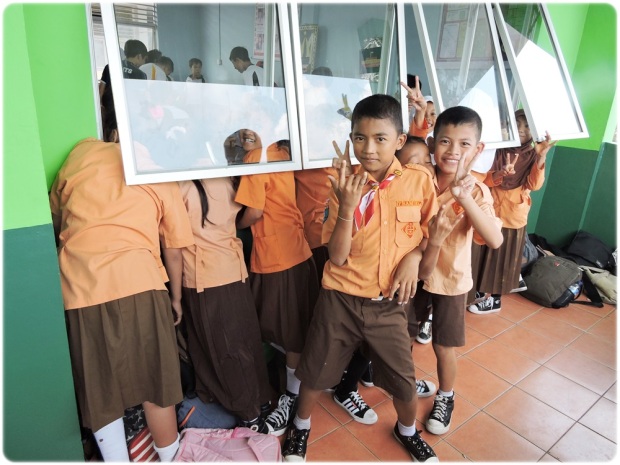 Spotted a musollah in between the two classrooms. Wow the convenience to do prayers! 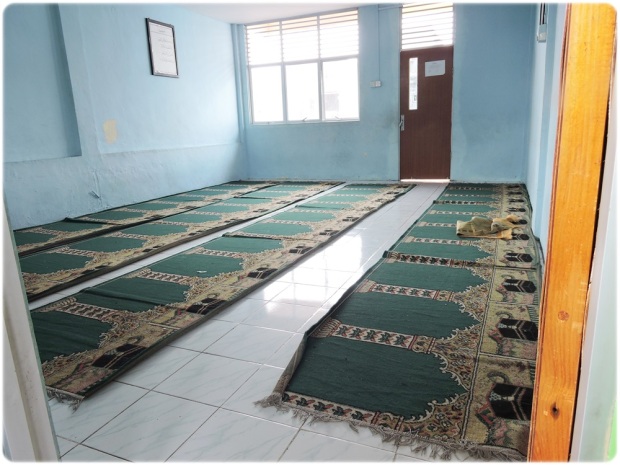 The view from outside the classroom was conquered by zinc rooftops.The school was pretty small and was only two storeys high.

The next door classroom belonged to the P4s.

I was attracted to this sign with such a powerful message about education, placed strategically at the entrance of the classroom.

It means ‘A knife is sharp because it spents many hours getting sharpened, similarly, a human mind is smart from the many hours of learning.’

It was recess and all the students were at the games stations so obviously the classroom was empty. While the tables were all wooden and old, look at how cozy the classroom is.

Before we leave, we had to clean up. We had to leave by 11.15 am. The bigger boys helped to arrange all the tables back.

Taking one group photo with the students! I had to stand on the chair to capture everyone! Lol. 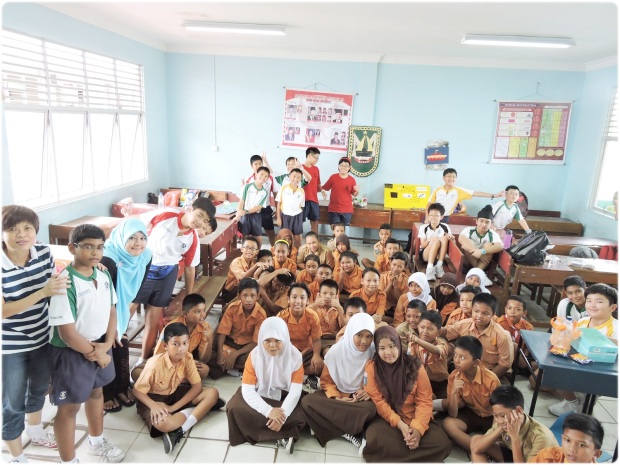 The organizers prepared some water and bread for us but none of the bigger boys took it. Instead„ they were seen giving it all away to the students of the school who crowded around us hoping to receive something from us.

Even though this was a public school, the conditions of the school were far less fortunate than what we have. They had ony 40 teachers in the school and so many students to teach. I really admire the persistency of the teachers and staffs there.

I wish I had brought more food to be given out. As I was leaving, everyone greeted us and waved us goodbye. The smiles of appreciation were clearly reflected on their faces. I felt guilty, I wish I could give more.

It was a good eye opener for the boys too, to see the conditions of the school. After this, I hope our boys will learn how to appreciate and be thankful with the luxury that we have been blessed with.

I had a wonderful time and a fruitful learning experience. I definitely want to come back next year and do this again. I hope to do more and make an even greater impact.

← Someday
Happy birthday to my bestie and best travel buddy! →