We are up early today because we are going to Zermatt. Yay. I love mountains, especially when they are covered in snow.

Gearing up, the last time I was at Mount Soraksan I could not function properly because I was freezing. Hahaha. This time I am more mentally and physically prepared. 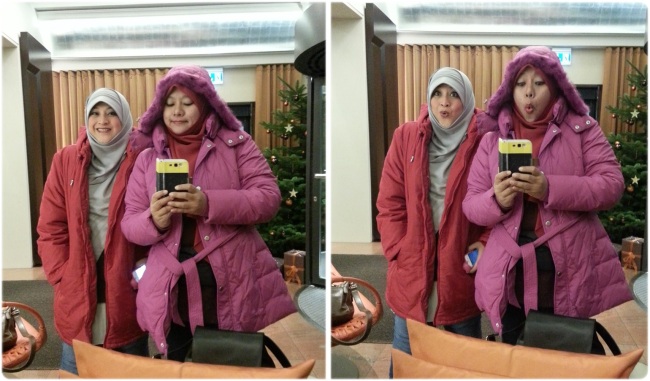 If you are travelling across Europe and you do not take the train to commute from city to city, its really a waste. There are so many things to see in all our train rides so far. 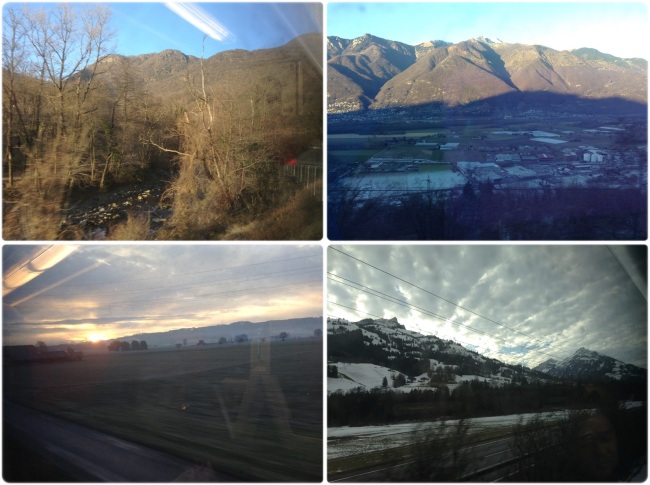 Can you spot the lake? Ahh…so beautiful! I wish the train people had done a better job at cleaning the windows of the train!

Look at us sitting in one straight row. Actually a few minutes after we board the train, the conductor came to collect the payment for the ride. At first I was wondering why it was pretty empty in our cabin. There were a lot of people boarding the train from Luzern, so I thought that we were lucky no one wanted to share the same cabin as us.

Apparently we were sitting in the first class! Imagine our shock when we were told to pay 93 franc for our train tickets. That is like more than S$150. Omg.

Ah, no wonder everyone was rushing to sit in the second class. Haiz. Lesson learnt. Next time, we know.

Anyway the good thing is that since our cabin was empty, we were able to change seats to take photos. The views were so beautiful, we were constantly changing seats from left to right and front to back to take photos.

I so love this photo of the stream. A few were spotted on the way there and surprisingly the water is not frozen. Perhaps its because its running water? I wish the train could stop so that I can be outside and stand next to the beautiful stream.

Felt like jumping in, even though I know it will be freezing cold. 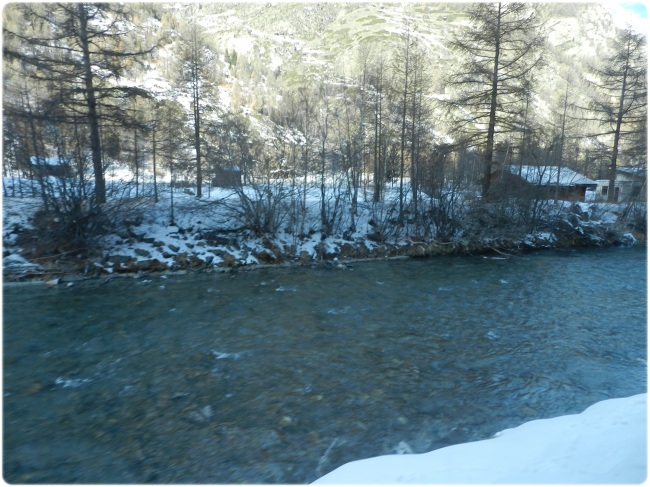 It was like a beautiful painting. I am glad the train did not move too fast. 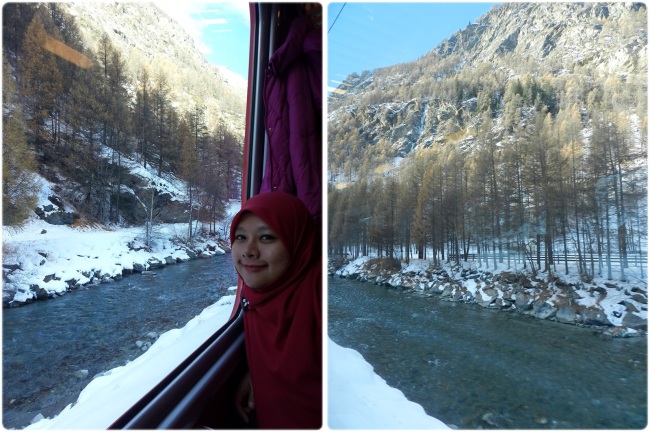 There is just something magical about seeing nature covered in snow.

We could see the mountain but it took a long time to arrive. But I guess I was too mesmerised by the scenery outside the train. I am pretty sure it will be so much prettier in Zermatt itself.

We were like excited kids. Its not something we get to see everyday since we live in the city.

We are finally here!

We needed to purchase tickets for the tram going further up.

A whole town below us as we go higher and higher.

Trees and houses in snow……its too pretty.

There were people getting off at different stations to ski. They were all in full gear when they board the tram. 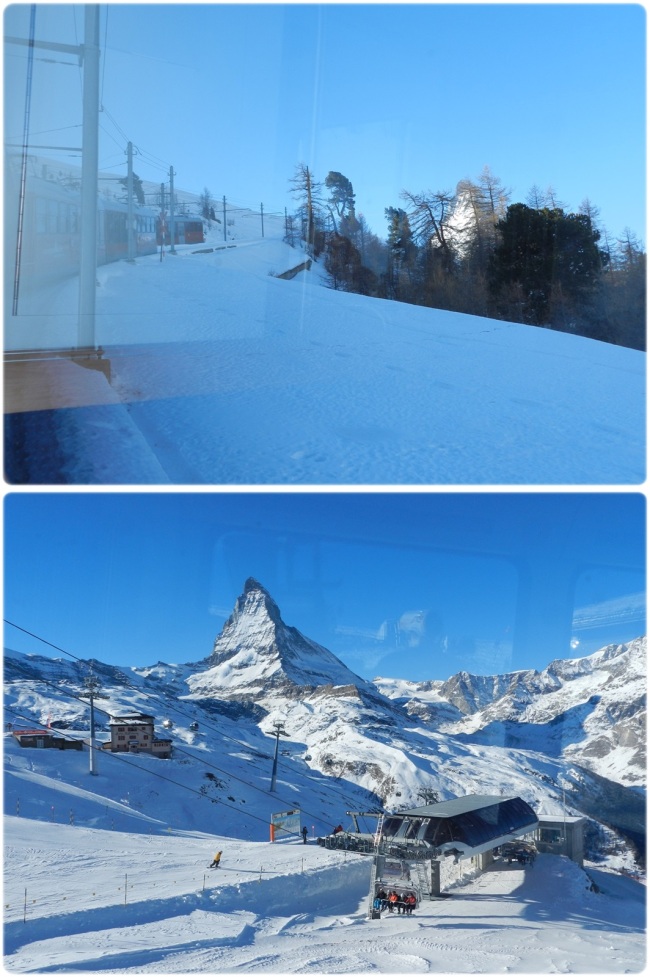 We alighted at the second last stop, Rotenboden. Everyone who alighted were there to ski! We were the only ones not! Haha.

This was what we saw.

We wanted to walk to the lake. According to Bon, it was about 10 minutes walk to reach there but we did not see any lake in sight. We checked with the people working there and was told that we cannot walk to the lake as the lake was frozen.

He must be thinking, ‘silly asians’. Lol.

In fact, the pathway there looks pretty far and since we were not in proper attire, we could not walk on the snow because it will be slippery.

Oh well, it was still a beautiful sight so we stayed there and took photos! 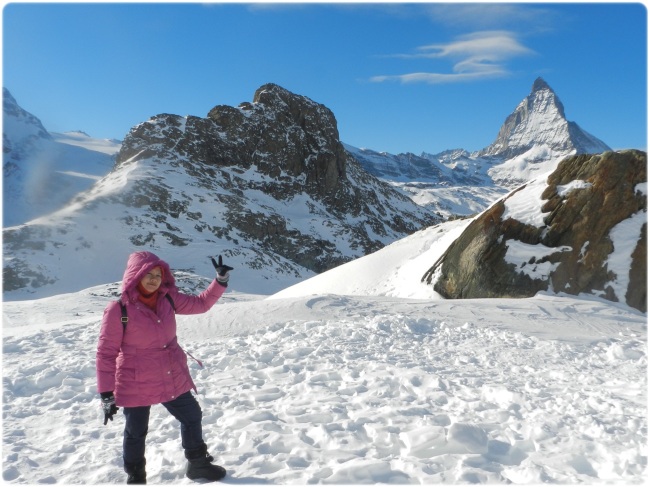 Due to the high altitude, I could float in the air.

With the pretty sun! Even with the sun high up in the sky, it was still cold and my fingers were almost numb trying to take photos. 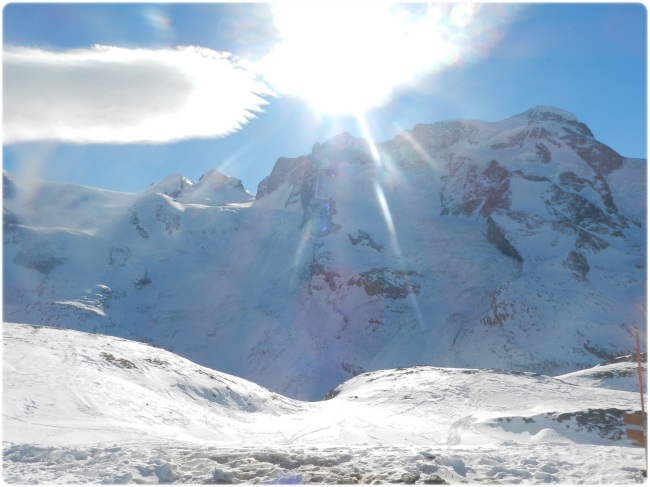 We can see the legendary Matterhorn from here!

There was only one bench there and it was facing towards the direction of the Matterhorn. My three mates took a family photo here with me as the awesome photographer.

Our second time with the snowy mountain. Yay!

My favourite photo of the three of us! With Matterhorn in the background!

Its amazing that I did not slip and fall (like usual). I remember slipping and falling down a few times while walking on snow last year haha.

We were there for a few minutes but apparently the tram does not stop by all the time. If we miss the next tram on the way up, we may have to be out here for another hour.

Actually I do not mind. This jacket is pretty good. I am not cold at all! Now, if only it does not make me look fat, it would be perfect! 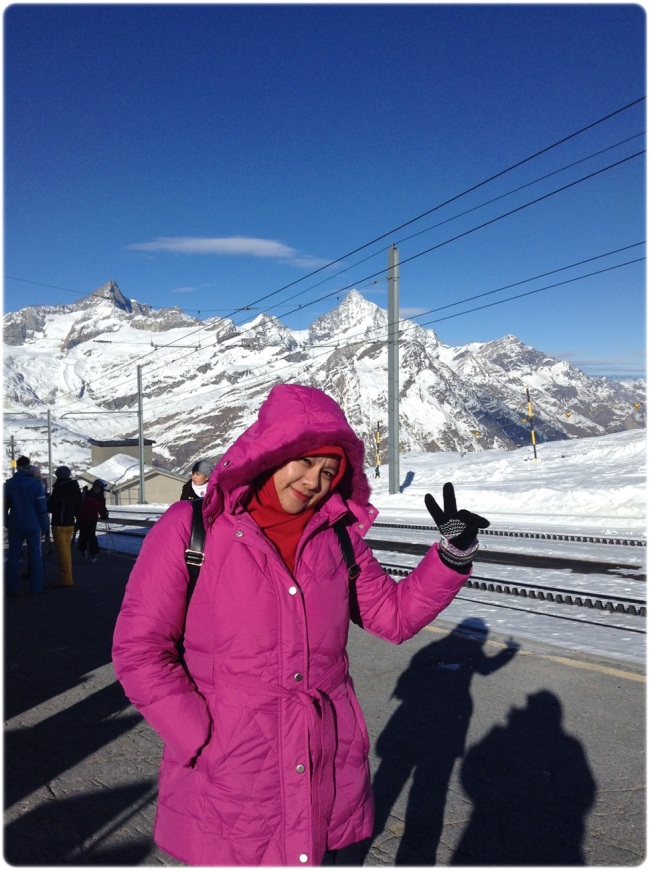 When we saw the tram coming, we ran to it like paranoid kittens. Lol.

We are here at almost the peak at Gornegrat! 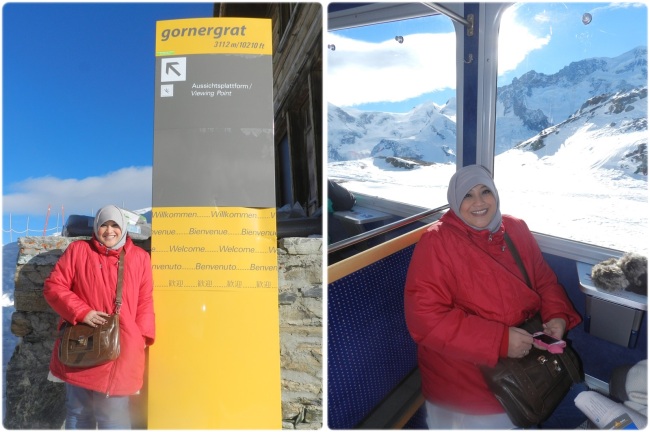 Let’s walk further up to the peak!

This view is awesome! And we are not at the peak yet! 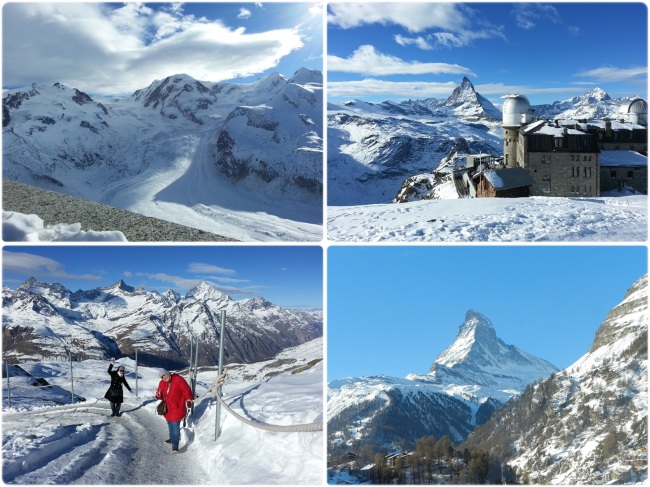 Bon was walking up too fast to check out the peak.

We took so long to catch up with her because we were playing with snow. Opps.

After she checked out the view from the ‘peak’, she said that its not as nice as the second last stop, where we were from, so we settled taking photos from there. 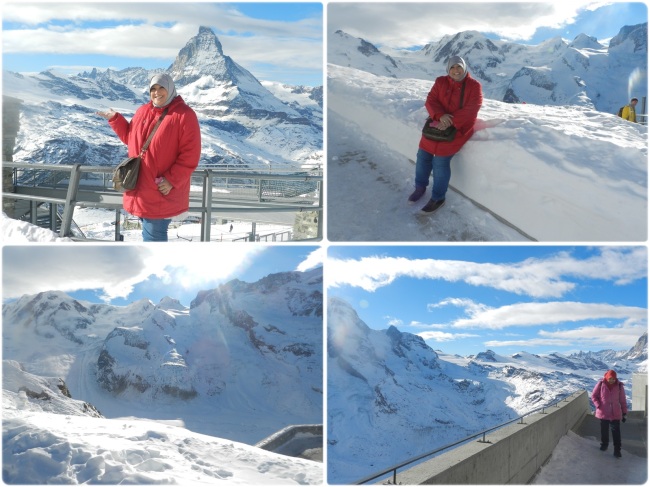 It was still a mesmerizing view. I love it so much! I cannot believe I am here, it was like a dream come true. 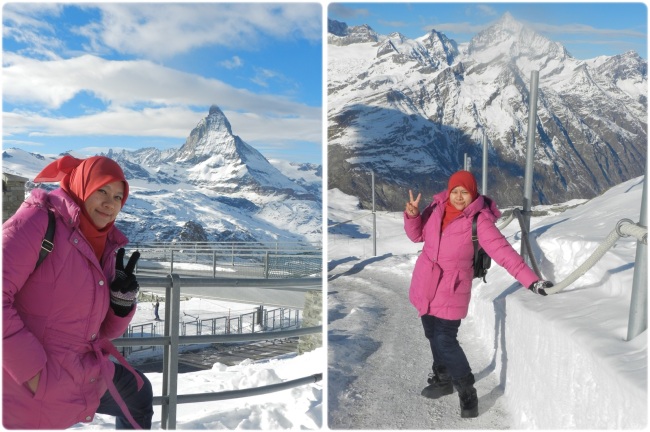 The view was too spectacular, I wish we could stay longer there to roll around in the snow. But we could not because we needed to pee badly.

Taking a few minutes to admire this gorgeous view. How can anyone not fall in love with this view?

This is the restaurant that we saw online. You can dine outside while enjoying the view, but it was too cold for us and the food was crazy expensive.

I must say that this is the most beautiful thing I have ever seen.

The background was so beautiful that the bestie’s friends thought we photoshopped it. HAHA. 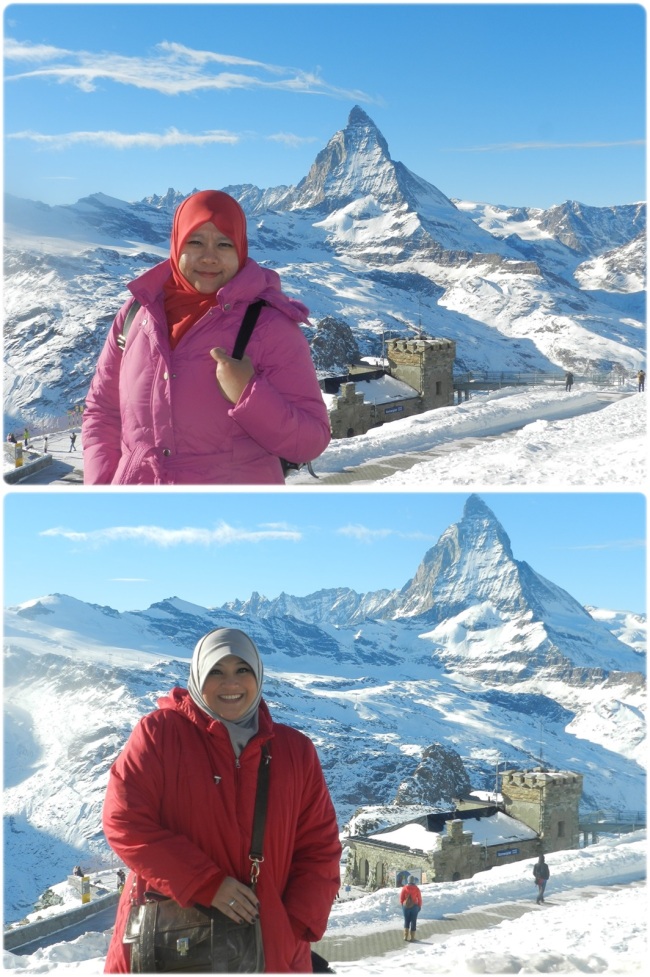 Quick lunch before leaving Zermatt and the meringue with cream was super delicious!

A bit sad that we had to leave so fast. We did not have the chance to walk around this small town.

Goodbye beautiful Zermatt! I hope to remember the amazing view and experience forever.

Back at Luzern and it was already dark.

On the way back we decided to stop by the supermarket and grabbed some of the drinks that were not available in Singapore. There were so many choices of yogurt. I love it! 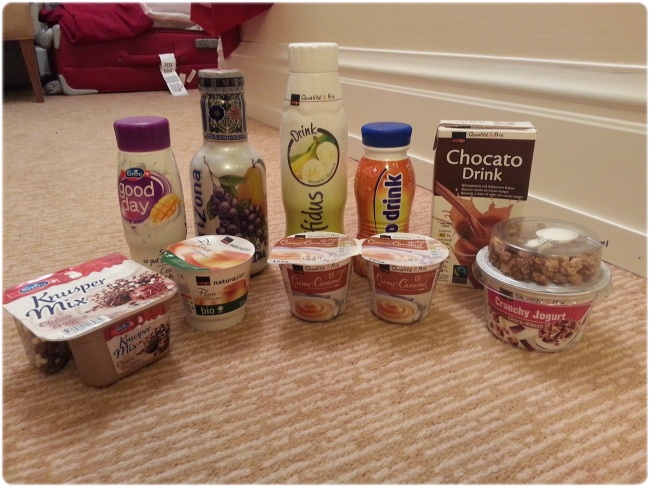 Today was an amazing experience. I like Switzerland better already.