Today is a new day! I am still bummed about the lost of my camera but I keep telling myself to not forget to enjoy myself while I am here. It would be stupid to keep getting hung up on it. Not an easy task, but I shall try my best to put it at the back of my mind. 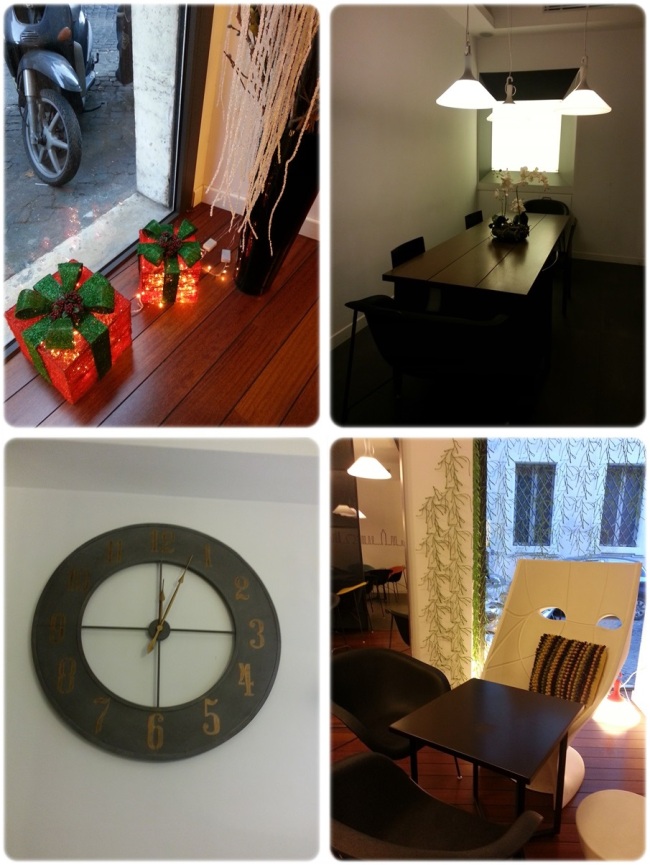 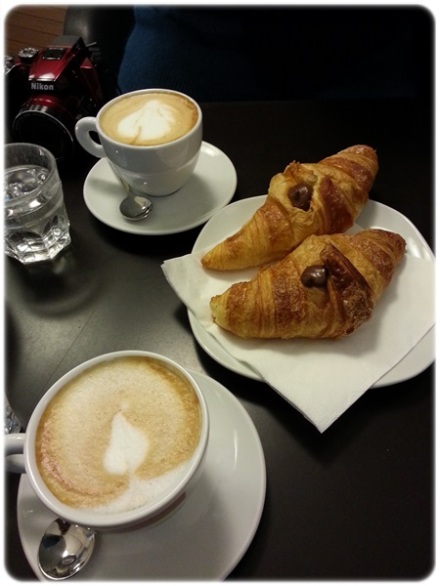 I thought they were going to give us at least 2 croissants? Not that I am being greedy but one croissant is not enough for breakfast! We eat more for breakfast than any other meal.

I am almost sure that I will be hungry in an hour. Haha.

The view from the roof of our building. It was an old area, where the pavements were made up of old school rocks. 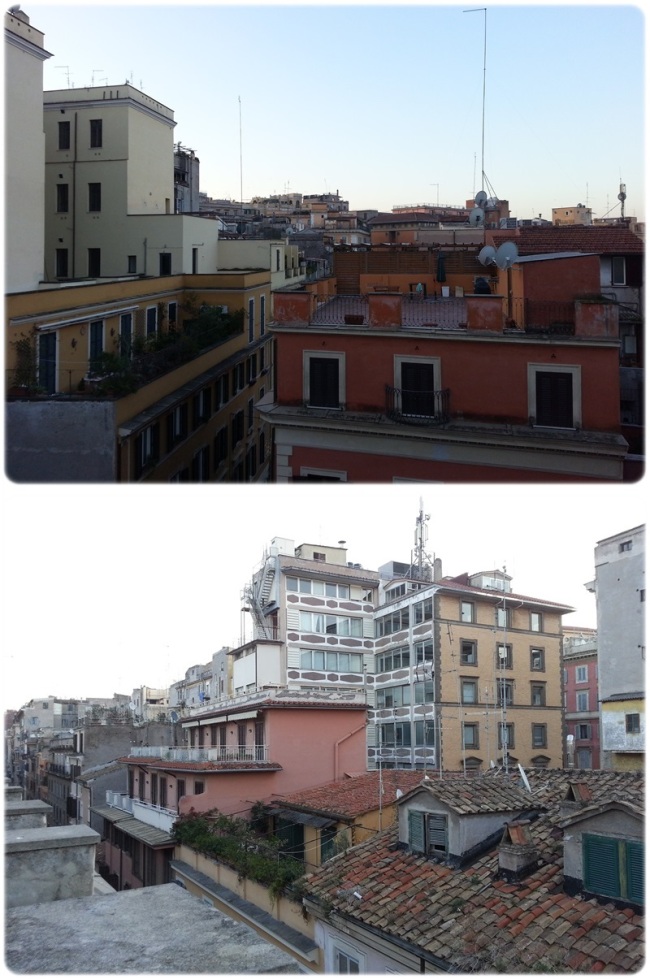 Thankfully the train station is only 5 minutes away from our dorm and within a few minutes we met up with Bon and AK and made our way to Vatican City.

We are here and its so crowded. Apparently, the Pope is here so everyone is here to listen and attend the ceremony.

This place is huge!

Its almost as if the architects made everything giant sized on purpose to make you feel small. 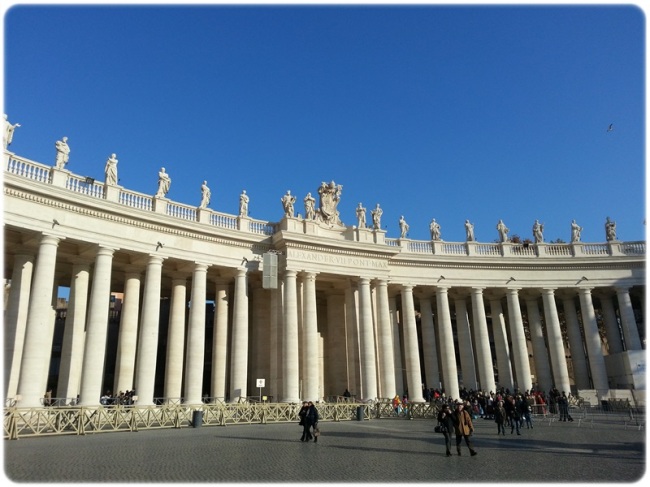 There were so many people, we were worried we could not go in because we did not have the pass/ticket but surprisingly the security was pretty relax. Haha.

We were there only to take photos. The Pope was preaching and of course we could not understand anything. Next stop, the museum! 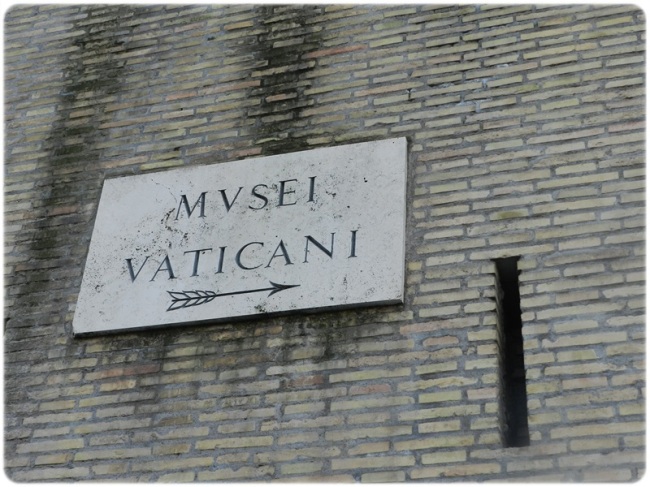 The museum was so enormous, it puts all the local museums here in Singapore to shame. There were paintings everywhere and the architecture is amazing.

I really wonder how they do the paintings on the ceilings. Won’t they get a headache?

Designs on the floor too. The Romans were obviously talented in art and design. 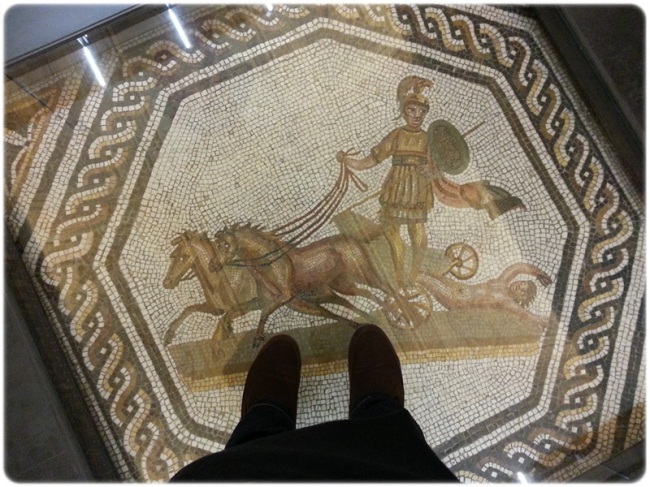 I have never been into such a historical museum. Truly awed by designs a little freaked out at how real the paintings looked. 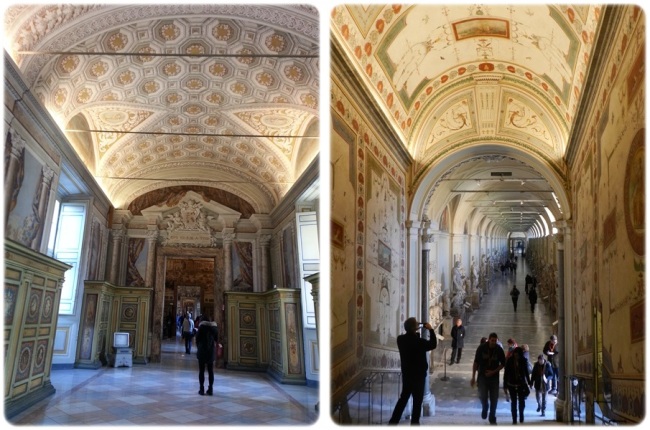 Check out the beautifully designed ceiling! It looks like its made of gold from this picture. 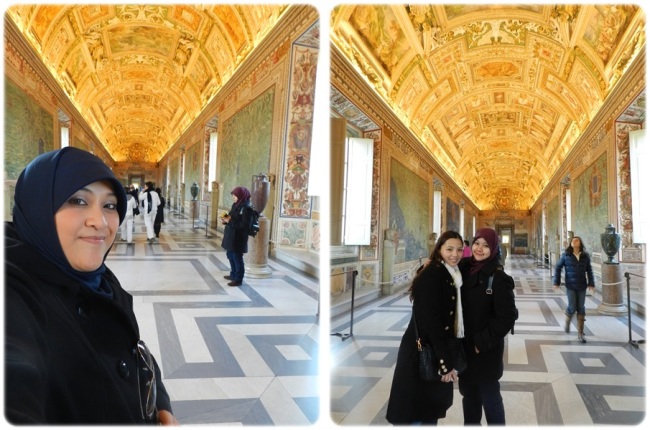 With such great talent in their architecture, I wonder why they could not have designed nicer clothes for themselves. 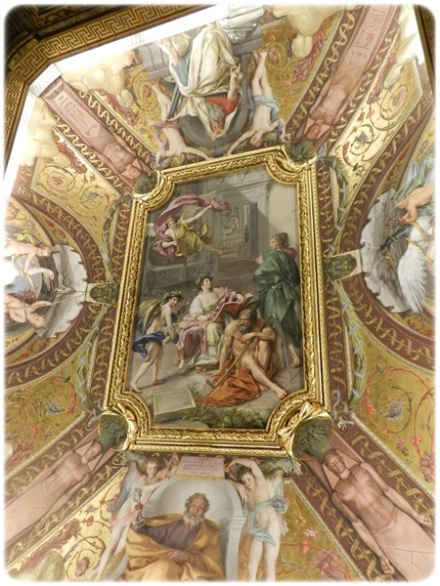 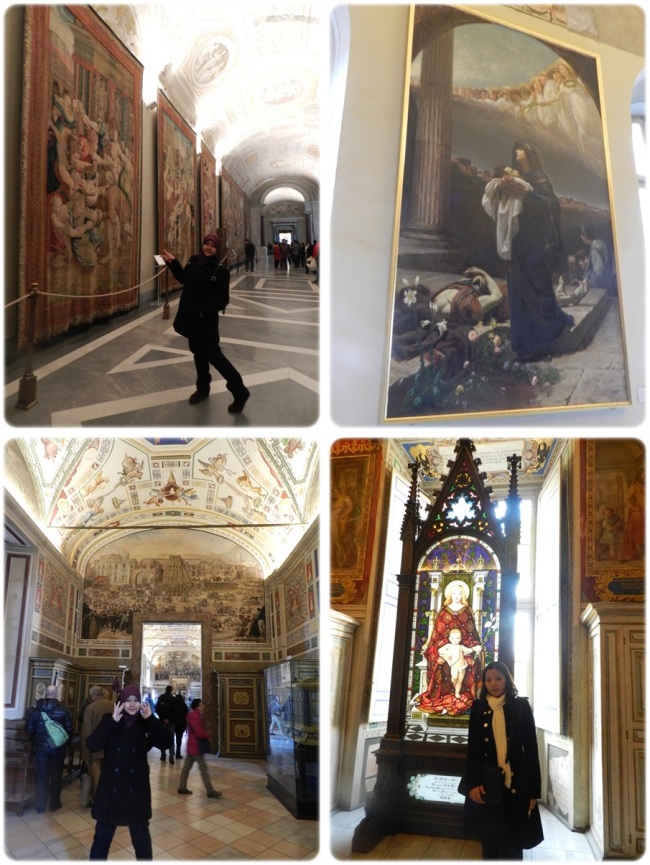 View from a window. It looks so nice to play outside even though its cold. 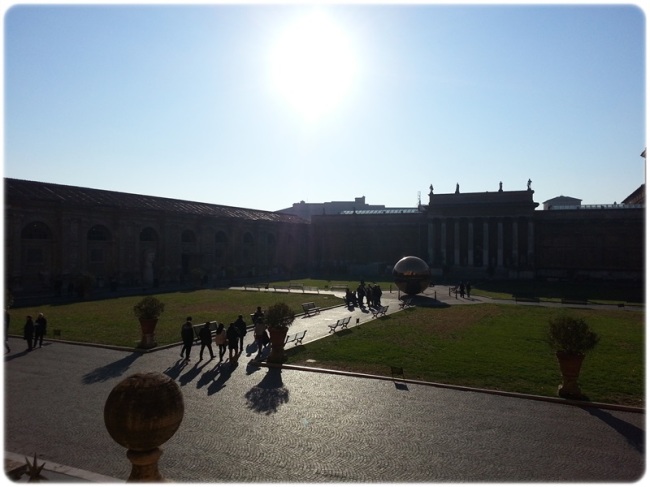 The beautiful spiral staircase greeted us at the exit of the museum. This was the top view. It was really crowded with tourist but I guess I am lucky to be able to take this photo without anyone in it. 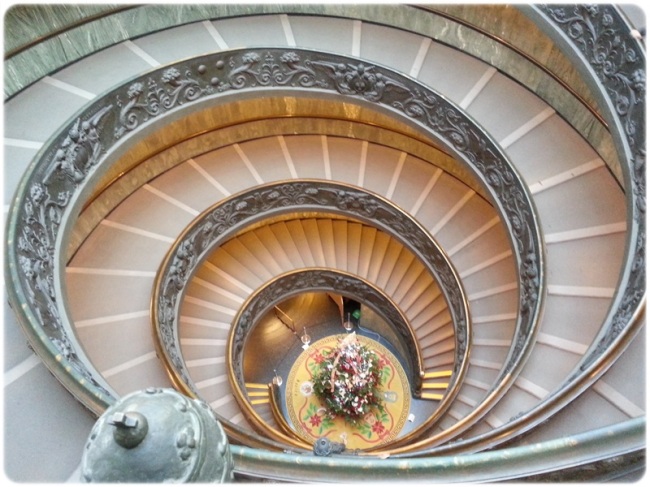 Time to walk outside.

This was such a beautiful scenery but unfortunately the place was lined up with Indian nationals selling useless toys. Some kept shoving the useless toys to us, it was really annoying.

I love how these two photos radiates a calming effect on me.

All the walking was making us hungry and thankfully we found a small cosy restaurant called Nero Cafe. 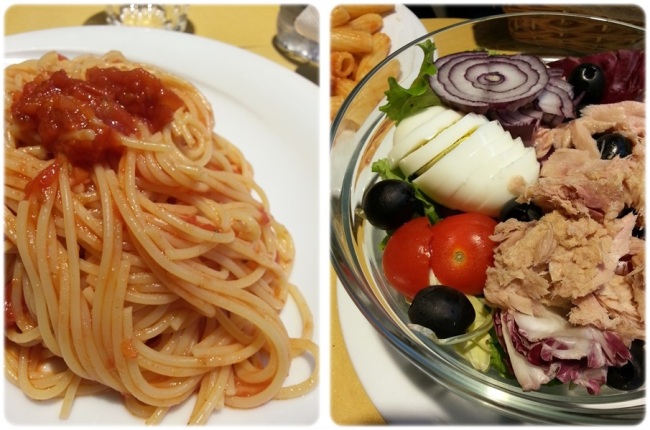 We continued walking and stumbled upon this random fountain that I thought was unique.

Again, there were so many Indian nationals around who were selling random useless toys. Some were doing this ‘performance’ that looked like they were floating? So they just sit there for hours and hope people will throw money at them? Freaky.

I was tempted to push them but I did not want to be my normal mischievous self. HAHA.

This guy is actually quite talented. He did all the paintings using only spray paint and tissue paper. Wow.

A rare sweet looking photo of us.

We are here at Pantheon! We went in but did not take much photos. Its a cathedral and there was a hole in the ceiling to allow sunlight to come in.

Fascinating. We decided to go back to Trevi Fountain. It looks nicer in the day.

Sorry but I am still not throwing any money in. 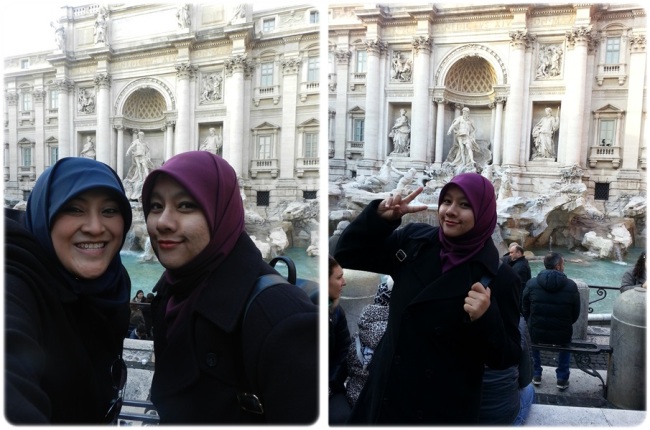 Next stop, The Colosseum. This was the only place that I wanted to go to in Rome. 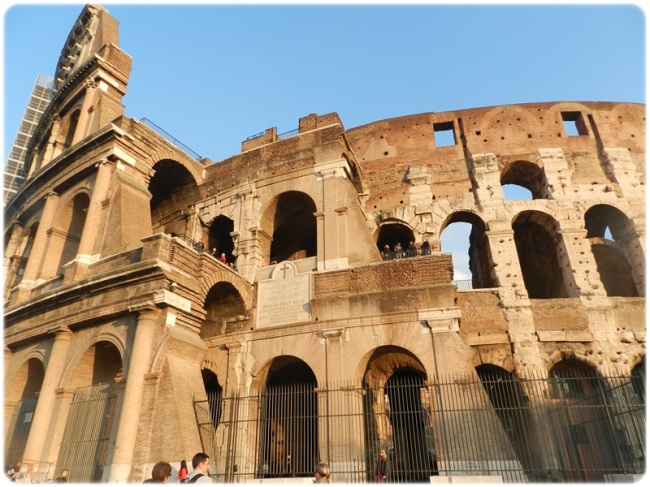 Unfortunately, half the building was under construction! See how tiny the people are? Bon and AK went inside and I really wanted too but we were rushing for zohor and asar prayers. So we merely took photos outside.

After the lost of my camera, we were both paranoid about the bestie’s camera. Trying to look for suitable people help take a photo of us was quite challenging since we did not really know who to trust. I suggested the fat security guy in uniform because in case he runs away, I am pretty sure I can run after him.

A nice American tourist helped us with this photo. She was also nice enough to take a few shots. 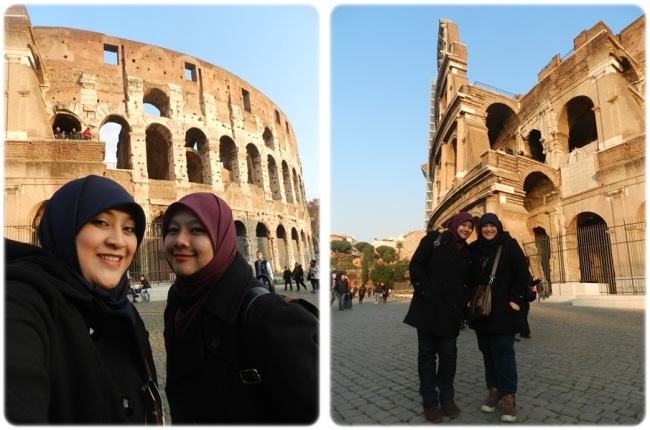 Took the cab to rush of the the mosque which was slightly out of the city. Sunset was at 4.30 pm and that was why we had to rush.

When we arrived at the mosque, it looks deserted.

The mosque was actually named ‘Hudaa’ (according to the bestie) but we could not see the name anywhere. Saw this and the list of countries who funded this mosque.

See how huge the washroom was. There was no one around and it was dark. We had to look for the switch ourselves.

We could not find the musollah for ladies. We saw two guys in the musollah and asked but they said that its close and that we can simply pray at the guys musollah.

Such a huge mosque and no one around. Sad.

However, when it was time for maghrib, one guy stepped into the mosque and did the azan. That was heartwarming. Its good to know that even with 3 people there, he still did the azan for maghrib.

The sunset from the mosque. So beautiful. 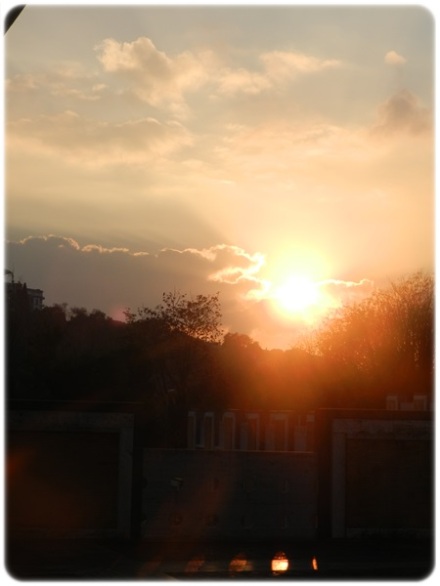 Took the train back to the city. The place was too quiet and the guy who did the azan offered to bring us to the train station that was 15 minutes away. Perhaps he was worried that these two girls might lose their way.

We were a little surprise that we did not have to pay any fare to board the train. I guess we are used to paying for everything here in our country.

We were meeting Bon and AK for dinner but we had some spare time so we walked around the area. Again, there were many scammers around and we were constantly dodging away from them. I have learnt to not give any reaction. Not even a ‘no thank you.’

I just pretend they are invisible. If anyone was getting to know, I am always ready to kick them in the knee. After last night’s incident, I walked around Rome ready to kick anyone who provoke me.

Time for dinner yay! We walked into this posh looking restaurant and I was slightly worried that the food might be expensive but it was ok. 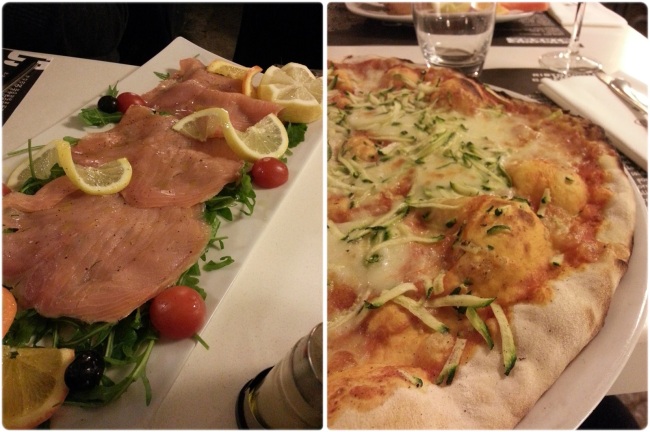 The bestie and me ordered pizza each and to our shock, it came in this size. For one person!

Who on earth can eat so much pizza in one seating?! I am just glad that the crust is thin!

There was a pretty cat at the restaurant. I miss Snowy.

Time to go back and pack. Its been a pretty long day of walking. The route to our dorm. 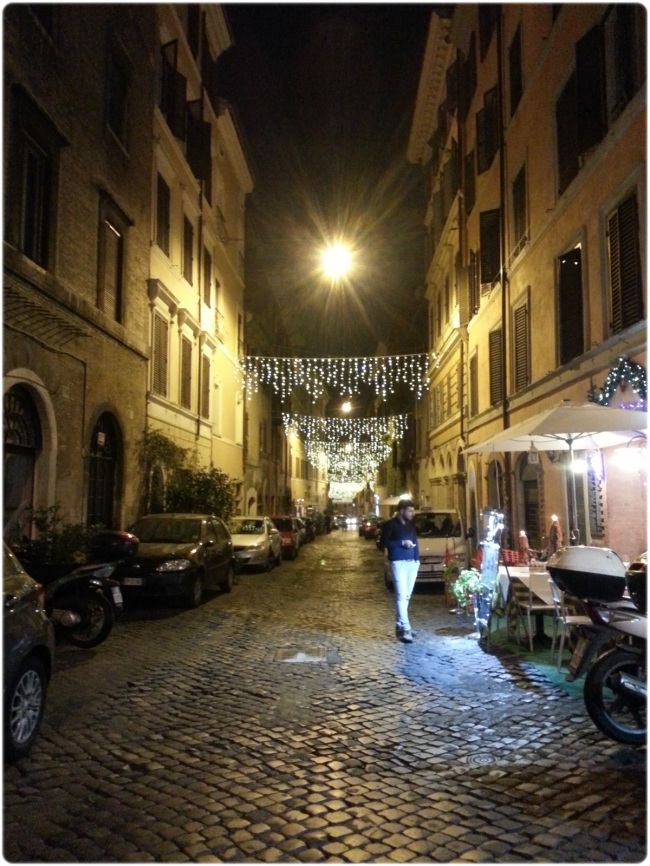 We actually walked home from the restaurant. It was pretty near but the whole day of walking was making my feet ache badly even though I was wearing my in-soles. Woes of someone with flat feet, I guess that is why I am not an athlete.

Rome is nice but my unpleasant experience yesterday was still haunting me. I cannot leave Rome with a good impression of it. If you are planning to visit Rome, here are some tips:

1. Make sure you are here with a good pair of shoes . Its easier to get to anywhere by foot in Rome.

2. Beware of the scammers and the pickpockets. Do not even be complacent because your precious belonging can be gone in a split second.

We are leaving for Venice tomorrow!