I have been fascinated by the designs of Nabawi Mosque and one of the most inviting view is this beautiful golden door.

I really love the elegant designs on and around this door. My attempt to take a photo with the door from afar since I may get chased away by the officials if I am too close.

My cute sister in law who always abide to my nonsensical requests.

However, there were no officials in sight so we went closer. Lol.

It was so crowded in the mosque. Finding a spot for us was stressful. In fact it was too cramped that we were sitting on the walking pavement. We could not even do tahiyatul masjid because it was THAT cramped.

Why is it so crowded during Friday prayers and this Nabawi Mosque?

Masjid Al-Nabawi or Mosque of the Prophet is the second holiest mosque in the Islamic world.

Rasulullah (BPH) is reported to have said; “Whoever offers one prayer in my Masjid (Masjid Nabawi) shall receive the reward equivalent to thousand prayer offered in other Mosques except the sacred Mosque of Makkah”,

“Whoever performs forty prayers with congregation in my Masjid, without missing any prayer, he would be free from Hellfire and punishment and he shall be free from hypocrisy.”

Now you see why we have not missed doing any prayers in this mosque the whole time we were there?

You can read more about the Prophet Rasulullah SAW’s mosque here.

Occasionally we meet strangers in the mosque who somehow touched our hearts and made us smile with their kind gestures. 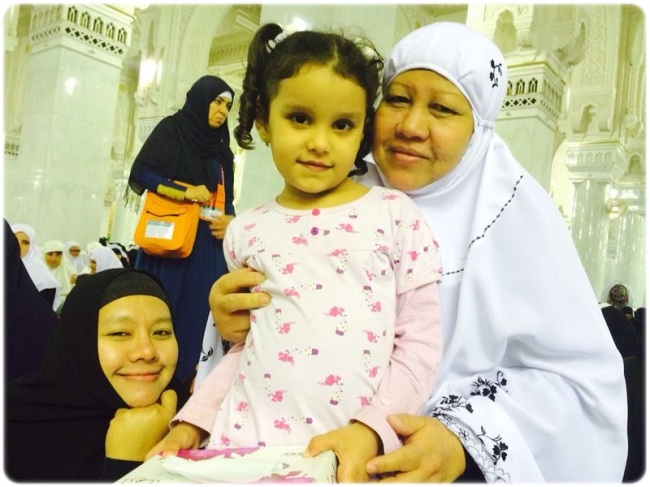 We had some time in the afternoon so we quickly went to shop. We have not had the time to shop so far and today was our second last chance to do it. By maghrib, we were back at the mosque.

I was just stoning and waiting for Isyak when I noticed that the roof was opened and the sky was in sight.

When it slowly opened, I could clearly smell the fragrance in the air coming from Rasulullah SAW holy grave from the other side. Wow. The sight was even more beautiful when some clouds started to linger above it.

It may look like clouds but it felt like the angels (malaikats) were around to visit. MasyAllah, it was such a stunning view.

I am not sure whether its the bed, or the place but I have been sleeping peacefully throughout the 8 days I am here. I am a light sleeper and I often accidentally woke myself up in the middle of the night but my sleep here has been sound.

On the first day in Mekah, I could not figure out how to change the time on my ipod and thus I could not set an alarm for Subuh prayers, yet the body and eyes automatically woke up when its time.

Due to that, I felt that even though my sleep was of shorter hours, I felt well rested.